Brut and Daddy Walking in Rhythm

Well now that I am in our fourth week of walking with the dogs as part of my exercise routine.  It seems that Brut, Zappa, Fiona and Silver are getting into the program just fine.  Daddy's New Year resolution.

Even though they all want to go first, I walk the dogs in the same order, so there is no misunderstanding between the dogs.   Brut is always first, then Zappa, Fiona and Silver follow.

Each time we go, the dogs seem to be going at a steady pace.  Not like it was when I first started and everyone was so excited that I could hardly keep up with them.  We are getting into a routine.  Although, I don't know who gets more excited, them or me.

Well Brut was in a really grand mood as we began our journey today.  As always he went at his steady pace making his mark every ten to fifteen paces.  Only this time it was more like making a little musical.  Every time Brut made his mark, he did his "four on the floor" (scraping the ground with all paws) then grabbed a mouthful of snow and he was on the move again.  He did this over and over again, for the entire 45 minute walk.  It was a song in the making:

The next time I take Brut I'm going to take my tape recorder and get it down, because we were rocking around that block!!﻿ 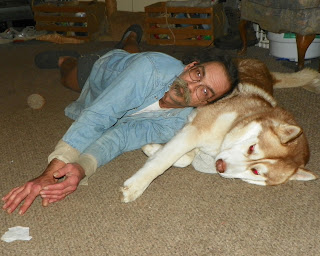 After all the dog walks are over, both Daddy dogs lay down for a nap.

Posted by 24 Paws of Love at February 06, 2011
Email ThisBlogThis!Share to TwitterShare to FacebookShare to Pinterest
Labels: exercise, four on the floor, resolution, walks

So funny, you created a wonderful visual.

I am trained by my dogs as well :) Enjoy your walks.

How fun - we can't wait to see that on video! And we really are feeling very deprived here, we need a walk too - the Momster is still waiting for clear and dry sidewalks:(

That's hilarious! Brut has quite the routine going.

It looks like they are doing warm up stretchs for their next walk. Yay!

I'm glad you're walking more, dogs are great for getting you into a walking routine. Wonderful blog.

Good walks are make me feel pretty awesome, too ;)

Brut is a very proud dog, not only marking, but also giving it a trademark. I'm sure everyone had a lot of fun.