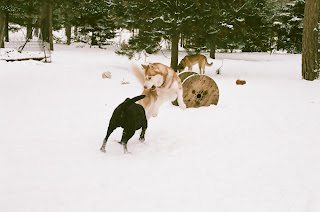 Dogs amaze me.  Every facet of their beings puts me in a state of awe and wonder. It can be seen as simply as the need to survive.  If a fight breaks out in a wolf pack, there is always a reason.  It isn't a random act of violence, it for the protection of the pack that everyone knows their place and if there is a challenge it is dealt with head one.  Once there is submission, the submissive one doesn't start plotting out revenge out on the hunt.  He isn't thinking how he will get that wolf back.  He moves on.  For his role in the hunt is just as important as being submissive to the fight. 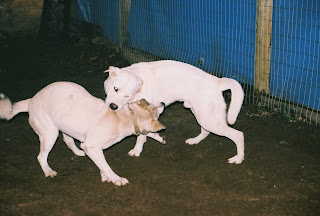 While difficult to believe that our loving pets, that cuddle on our beds are descendants of these wild creatures, there is still a structure and order that I really don't think we can begin to understand.  Speaking from my mere experience of having two packs for just over two years, it is still a mystery to me.  After witnessing and observing the data of how these two different packs operate, it is still difficult to tell what really sparks a challenge or a defiance of order.  For example:  Food may be the object, but what really sets the gears in motion to protect it?  Survival?  Territory?  Dominance?  Do we really know what makes that particular dog feel threatened?  Blaze and Chance can literally share a plate together very nicely, but there will be moment when that gear sparks off and ensues a riff between the two.  Is it the actual food itself or the communication between them?  Someone stepping a boundary that was set just at that moment and was suddenly challenged.  Is it because of their history?  Their previous owners used to throw a piece of food at them when they were still young and watch them fight over it.  If so, what makes that flip back to the past of the need to fight over that morsel?  Do they have triggers like we do that sets us on an automatic course of reaction?  Or is it because Blaze is more dominant than Chance and feels she has first rights to him?  Could he have done something earlier in the day that challenged her authority that she felt the need to clarify once he started to cross that line again?  Or is in the bloodlines?  Daddy Dog Brut is known for his possessiveness of food, which can be attributed back to his grandfather and when he was being weaned from his mother.  Can it really be that complex?  Or is the simple the survival of the fittest? 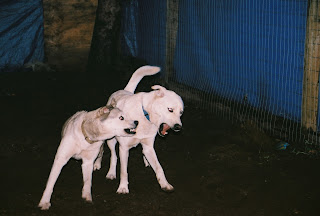 What I have found it it may be all of these reasons combined.  I have watched as a particular motion will cause a reaction from Chance and Blaze in accordance with being abused.  I have seen Blaze put Chance in his place when he crosses a line and vice versa.  I have put down one plate of food for them to finish and  most days they lick it clean together, but there are other days Chance backs away while Blaze gets the goodies.  Then there are those rare moments when a fight breaks out over food.  What makes one moment to the next different from the other?  What pushes that limit?  Can we really say we know?  When you are tired, don't you give out different signals that may be interpret as something else?  You can explain it by saying your tired and we all understand that.  But what if you said it in a foreign language and no one understood you?  How would you get your message across?  How could we comprehend exactly what you meant?  How many times have you misinterpreted what someone said when they were speaking to you, even when you witnessed their body language and demeanor?  How many times does this happen with the communication between us and dogs? 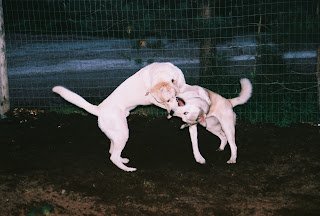 I think we are sometimes too certain that we understand a language that we really can not understand.  I think we have to take all things into consideration just as you would with any human you know in order to really get to know them.  I think it is the beauty of really getting to know your dog.  Their likes and dislikes, their quirks and their own language.  For they have a language that is all their own and as unique as their individuality.

How would you know that "le chien" means "dog" unless you knew French?"

Le chien...kinda just slides right off the tongue :) I like it!

When my dogs have gotten in a fight I always try to find an explanation for it, I try to look at everything, if I can find a reason for the fight it makes me feel better, but who really knows if I saw everything!

I agree with Jen. Dog language is so complex and happens so quickly. I miss so much.

One of my favorite books is Turid Rugaas' Calming Signals. It has excellent pictures of dog communication.

Of course, reading a book is never as much fun as trying to watch the dogs we love and learning to understand them.

And don't you think we can learn all different things from individual dogs, too?

Awesome post! I run into that problem a lot with Layla, and from what I've been told and read of other people with Malamutes, it seems to be an issue. Malamutes are still very pack-y, and still very much into putting dogs in their place if they feel they deserve it. It's not done with malice or anything, but it's scary to someone who doesn't understand dog/wolf behavior and language. I find it absolutely fascinating though!

Excellent post!! You bring up some great points here, thoughts I've had and wonder about quite often. There's some evidence to show (as you pointed out above) that the language of dogs is so complex that their "dominance and submission" is fluid, not hierarchical. That each situation is dealt with individually as it comes and through the lens of the viewer (the individual dog). Fascinating!!

Wonderful post really make me think. I have two brothers, Peter and Paul. Peter has been adopted but Paul is my foster. These two boys will seriously get into it and it never fails that Paul will bite Peter and there will be punctures on my poor Peter. I have been told it is a sibling thing but Paul has a bit history at two potential forever homes. I know if I am lucky enough to find Paul a suitable home it will have to be one without any dogs. This makes me so sad as I see how much he loves playing with my other two dogs and even loves playing with his brother often. But I have to separate them when I take then to play int he back yard as they get way too excited and often fights break out.

BTW-I have a wonderful way to break up dog fights. place some pennies in a tin can, when fight breaks out shake the can and I promise you each and every dogs will stop what they are doing and forget all about the fight that just broke out.

Great post. I also wonder what dogs could be thinking. They all have different personalities and moods. I'm having problems understanding what Aschiuta wants.