Houndstooth of Tales and Tails post:  I Chose You, really struck a chord with me, as she described how we bond stronger with some dogs than others in our lives.  They were called "Heart Dogs."


When the breeder held up Brut asleep in his hand at four weeks old, it was as if heaven's light was shining on him.  He was not the color I would have chosen, but I couldn't take my eyes off of him.  I locked on him and I couldn't change my mind if I wanted to. 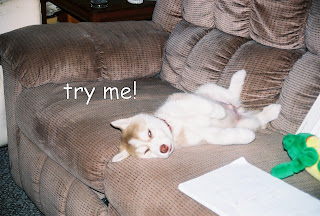 We brought him home at six weeks.  After two days I was terrified of this little monster and didn't think I could follow through with him for an entire lifetime.  If I tell you his behavior, it will sound like normal puppy behavior, but his eyes told a completely different story.  They were wild and crazed.  Something about him wasn't right.  I was in tears many times because I didn't know what to do with him.  Brut was the most difficult puppy I'd ever come across in my life.  I have never been scared of dogs or puppies before, but I was scared of Brut. 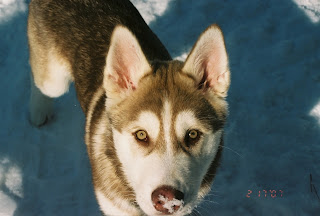 His aggression was right on the surface of his skin and tore through my fears.  Every day I was on the fence about wanting to keep him and yet I could never give him up.  I couldn't do that to him or myself.  As our bond grew and I began to make small breakthroughs in my fear of him, he in turn began to teach me about himself.  When he was a year and half old a broke up a fight and  he showed me his "aggressive spirit." I looked into those eyes and was shocked to see not a killer that I thought was there, but a tortured, pained soul begging for help.  That was when I began to understand Brut.  It was the first he had really shown himself to me and it was the first that I was able really see.

Brut and I were bonded the from the first time I saw him.  A connection that was raw but unbroken and now I am so proud of this beautiful dog that I have the honor to say is mine.  A gift from heaven that I have been truly blessed with.  When I thought the answer was to give up, somehow Brut showed me how to believe and changed my life forever. 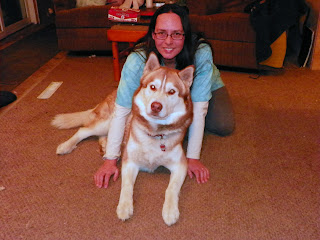 For a more in depth version of this turning point between Brut and I you can read:  A Little Bit About Brut and Me
Posted by 24 Paws of Love at February 01, 2011
Email ThisBlogThis!Share to TwitterShare to FacebookShare to Pinterest
Labels: aggression, bond, connection, dogs, fear, puppies

What a beautiful post. Of course I had to click on the link to read more.
May you and Brut have life's paths filled with rays of sunshine.

That bond is a very special one. We too wish you many more years of such joy with Brut.

One of the reasons I love dogs is because I want that connection to something wilder than myself. Dog gives us a chance to bond with someone who is sorta wild and sorta tame. It's an amazing thing.

I read your other post and it sounds like Brut is also a big part of allowing you to connect with your inner child. No wonder he's so special to you.

It's a wonderful bond and one that I am fortunate to have with Sherman.

I can sense the wonderful bond that you have Brut in your writing, it is beautiful:)

Wonderful post... it's really clear from the way you write about Brut how much you love him and what a special bond you have.

Such a sweet story! We're so glad you and Brut found each other!

A true dog lover- never give up and you'll be shown all the true secrets and love a dog can give :)

I am so happy for you that you are in a place where you can write this post. It sounds like it wasn't an easy journey. Is it ever? But here you are, connected and in love. It's a rare thing.

Sometimes I think some humans and dogs were just fated to be together! It seems like Brut needed to be with you as much as you needed him. I doubt many people would have been as understanding of his behavior as you were!

I'm also glad to know I made somebody think a bit! :) That doesn't happen too often! lol

You described a little of what I'm going through with Aschiuta right now... I'm glad you decided not to give up on Brut when he was such a difficult puppy. Some dogs are nice and calm, others are like a storm, but still have their own charm.

You can tell by the picture how strong your bond is, you can see that in Brut's eyes. It's like he's saying, "yep she's mine...all mine."