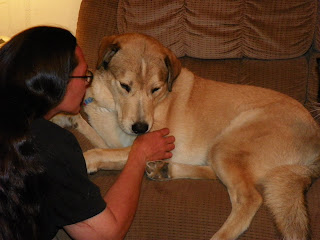 I grew up learning dominance training for dogs.  I could never stand the constrain of it, even though I used it in my adult life.  Silver got the brunt of it and it wasn't until getting Brut that I felt even more constricted by conventional training and the need to be free.  I have read maybe three books on dog training and never read any of them in full.  I found positive reinforcement and that helped to loosen up the grip but I still found it lacking in creativity.  I began experimenting with several methods, a mixed bag of things I'd picked up along the way and my own intuition.  I constantly changed and used what I needed at the time or what worked taking things to the next level.  I learned to work within my own pace and the dogs, letting them guide me to where they wanted to go.  I made mental notes along the way for my brain to process and when situations presented themselves, the idea was suddenly there.  I followed the dogs lead many times (oops! that's not the right way) and found I had a better outcome than I when I tried to take the reins.  I thrive on creativity and began to shape and mold the tidbits of information I discovered along the to work for me.  I found that for me something will only work if it is built for both the dogs and I.  If I'm not comfortable with it, then I can not expect my dogs to be.  Over the past several years our lives have been sculpting into this beautiful bond that exist between our dogs and us and we have realized along the way that the journey is almost as good as the results.

Like any parent who wants different for their children, I wanted different for my dogs than how I grew up.  I wanted them to have the freedom to express and think for themselves (gee, how did we end up with Huskies??) and I wanted their personalities to shine, not be stuffed in a box or made to conform.  I wanted them to live and experience life to it's fullest and not be tied down to rules and regulation.  Has it been easy?  No, and sometimes it is harder than hell. And as much as I believe in it, I still struggle within myself the acceptance of being able to do that.  I have beat myself up because my dogs aren't like the other dogs or can't do the same things.  They don't always have the best manners and they have special circumstances that make them outcast compared to other dogs and people I know. Sometimes I am embarrassed and ashamed and will go through periods where I try to "fix them," only to find myself swallowed in guilt, begging their forgiveness, and looking in those soulful eyes asking myself, "what am I doing?"  Then I take a deep breath and bow again to these souls that lift me higher than I should be, reminding me of the reason I started this road.  For these are my own inner struggles to be myself.  I recently discovered that the gift I have been giving them is being returned to me ten fold.  My dogs are teaching me how to have the freedom and beauty to be myself.

For far too long I have wanted the perfect dog, but my belief in letting them be themselves overrides that want and holds a richness that inspires me to hold myself to the same principles.  A feat still in progress and a journey that we are taking together.
Posted by 24 Paws of Love at July 13, 2011
Email ThisBlogThis!Share to TwitterShare to FacebookShare to Pinterest
Labels: dogs, gift, teach, training

What a wonderful post and a great example of how dogs bring out the very best in all of us!

I think you always have to fine tune things with dog training, because every dog is different. Just like people are. And even within our family, our dogs react differently to me than they do to my husband. It's just one of those things you always have to tweak! :) I think the worst thing is when people don't give their dogs any training. How can you have any kind of relationship without a common language and understanding? Training is how both sides learn about each other!

I think it is amazing you have been able to come so far on your own. I couldn't do it, that's for sure. We didn't last six months before I knew we were going to need some serious outside help.

Dogs are family members and therefore should match your lifestyle. I firmly believe what works for one person may not work for another and that as long as you and your animals are thriving, it really doesn't matter how you live. Training is about learning and building a bond. You have definitely done both of those things in spades!

You express it so well, and you have such a beautiful bond with your dogs.

What a touching post, it makes want to go out and get a dog.

I love this. Dogs are individuals and training that works well for one doesn't always work for another one. You do have to be open to think outside the box sometimes and let them take the lead. We can learn as much from our dogs as they can learn from us.

I have the same feeling on the subject as you do. We don't have the best behaved dog but they only weigh five pounds so that' a big advantage.

It is so very true that your training method needs to be matched with the personality of each dog. I, too, grew up with dominance training. Fortunately, my first three dogs were fearless and not at all fazed by that type of training.

Thank goodness that when I met K, I also met an awesome positive-reinforcement trainer. K would have been crushed by dominance training. Even an angry gaze from me upsets her. Positive training is perfect for us.

It is so true that you don't end up with a robotically perfect dog with positive training. However, it's worth it. You end up with a bond that is incredible and a dog who isn't afraid to think for him/herself.

The perfect dog would be a boring dog, just like the perfect person would be boring. I like my dogs to be full of personality and character and a bit of mischief:) I'm really enjoying watching Beryl's personality develop over the 15 months since I've had her! Our bond is strong and I hate to think of her and/or Frankie being with anyone but me. I hope they feel the same way! Having dogs is a wonderful journey and adventure and again you've written an expressive post that says what I'm sure many of us feel.

THANK YOU! This is so timely and pertinent to what the White Dog Army is struggling with right now. Your words inspire and encourage.

It is much where I have been and how I feel written down in a very beautiful way :)

You put it so well for many of us.

If you're ever inclined to read a book by a trainer all the way through, I think you'd really enjoy Suzanne Clothier's Bones Would Rain From the Sky. In the first chapter, I think you'd say to yourself, "Yes, she gets it."

Clothier is an excellent trainer but for her it's all about relationship. I think you'd find her a kindred spirit.