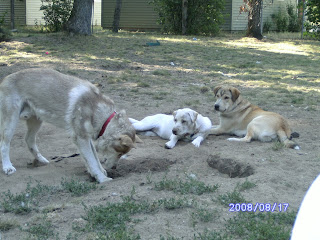 Keep all eyes focused on me!
Imagine if you will, the stunned look on a dog who prides himself on outsmarting anyone and everyone in his path only to become completely bewildered by what has just happened or how it even came to be.  While his competitor smiled in victory as she watched the baddest dog in land sitting dazed in the same spot, knowing she had got him!

Now for those who don't know, Brut is one tough cookie.  He has a lot of street smarts.  And his game is to outdo those around him by any means, especially me.  He derives great satisfaction at winning and this time he thought he had me.

When Zappa and Fiona were about 5 months old and doting all their attention on daddy Brut, it soaked right into Brut's big head.  We were playing outside, it was time to come in, I called Brut so that the puppies would follow.  He looked at me, knowing his kids would go anywhere he went and started in the opposite direction.  I called Brut again, he ignore me as he smugly walked with Zappa and Fiona pawing all over him.  Just try to get them from me.  They love me! he said through that grin.

I paused.  I had to go in, which meant the puppies had to go in.  Then I remembered what Brut did not, though I was doubtful it would work.  I turned and started walking towards the door, in seconds Zappa and Fiona were zooming past to meet me at the door.  I found myself laughing at the two little wiggle butts waiting to go in and there was Brut with his jaw hanging out in complete disbelief at the turn of events!  His forehead crinkled as he stood there perplexed and in shock. His wheels began churning trying to put the pieces of the puzzle back together. You could see him calculating back over the situation to find out what had went wrong.  As the three of us entered the house, I could see the half smirk growing in his eyes as the light bulbs were flashing off.   He knew he'd been had!!

The funny part is that I never "taught" the puppies to follow me inside, they just always did it. I didn't do anything and it worked!


And even better than that,
I Gotcha Brut!! 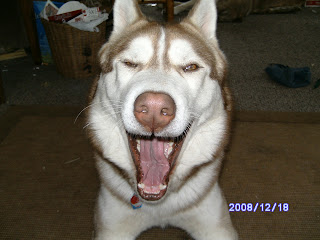 Posted by 24 Paws of Love at November 07, 2011
Email ThisBlogThis!Share to TwitterShare to FacebookShare to Pinterest
Labels: monday memories, puppies

This is what I love about having a smart dog - trying to figure them out, and sometimes if you're lucky, outsmart them on occasion. :)

Ha-ha! I can totally picture Brut standing there trying to piece everything together, wondering where he went wrong!

What a great story! I love that "gotcha" moment too. Quite a feeling of satisfaction.

They know who butters their biscuit!

Stop on by for a visit
Kari
dogisgodinreverse.com

Sometimes it just feels SO satisfying to get one in on them! I really know that feeling!

It was your confidence and gentle insistence that you were going INSIDE that saved the moment. Brut knew he was bested but I bet he was ok with it because you did it with stlye and grace.

That Brut is such a handsome devil, love the photo:) It's great to beat them at their own game sometimes, but I love watching them trying to work out where they went wrong!