The Trainer Who Gave Us Hope

So if you've been following for the last couple of days (first post and second post, thank you, and hold on because I'm not just taking a trip down memory lane regarding Brut and our behaviorist experience.  I am trying to sort myself out and back up and regroup to try and deal with a current dilemma I am in.  Which I will share tomorrow.  Thank you so much for everyone's comments and support.  It makes a difference. 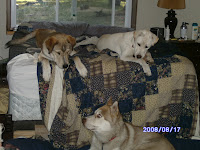 Oh, and I should probably put a few things into context:  Brut was 1 1/2 year old at this time, Zappa and Fiona (his puppies) were about 5-6 months old when we saw the behaviorist.  (Currently, Brut is 5 years;  Zappa and Fiona are almost 4 yrs)

The scene:  We only have the Back Dogs at this time, Brut, Silver, Zappa and Fiona. 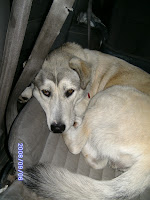 Enter: Blaze.  A puppy from our litter who was returned to us at about 7 months old.  Abused and neglected.

We tried a few different times to introduce the Back Dogs with Blaze.  They would not accept her.
I looked for anything online to help with intro.  Nothing seemed to work.  I finally broke down and called a trainer for any suggestions, advice, techniques, methods, anything that might help.

I explained the situation.  Four dogs, A mother (Silver), father (Brut), and two of their pups (Zappa and Fiona), trying to introduce another pup (Blaze) from same litter.  Father has dog aggression issues and tension between him and his son was increasing.

When he told me I would have to bring all the dogs in for an evaluation, I half gasped and chuckled, while telling him I've never had all the dogs in the same car.  You could hear him shake his head as he said, I know.  He had heard this story way too many times.

The weariness of this trainer said he'd been through the ringer of dog owners like me in desperate situations they had created due to lack of education.  I was only one of many he had encounter and his hopelessness of the situation was ladled through his every word.  The guy sounded exasperated and worn as he went on to explain that when aggressive dogs reach the age of 2-3 years, there is a physiological change.  Meaning the  aggression wasn't going to stop.

He saw no way out of the inevitable.  The dogs were going to fight.  He told me I didn't know what I was getting into.  His exact words.  And his best solution was to get rid of the puppies and just keep the father and mother.  That was how our conversation ended. 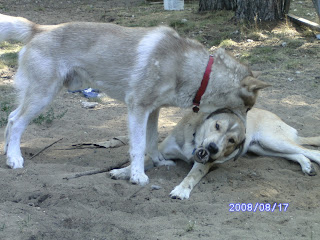 I sat for a minute after hanging up the phone, soaking in his words as a smile began to spread across my face.  I felt the hope rise within me as I replayed the conversation in my head.  I didn't know what I was getting into?  I'd been "in it" since I'd brought Brut home showing signs of problems at a very early age.  Getting rid of any of the dogs was not and would never be an option.  I almost jumped out of chair in glee as I ran to relay the hopelessness this trainer had displayed and the outcome of it all to my husband.  This trainer had given up.  Long before I called.  I was no where near the bleakness he was in. I have had my moments, but I hadn't given up.  I still had hope.  I saw possibilities.  And talking to that trainer helped in blowing those doors wide open!

I still draw strength from my talk with that trainer.  I don't know how another person might have taken it if he told them there was no hope except to get rid of a dog or two, but I couldn't have disagreed more.  He was an excellent gauge into where my belief, hope and strength were.  My husband and I had been running this show on my own this long and had yet to give up and somehow he gave us even more reason to believe that we were doing the right thing with our dogs and that we would find a way to make it work.  Whatever that took.  And with that knowledge that is just what we have done.

Needless to say, my husband and I have fumbled with all kinds of brainstorming and ideas.  Like a couple of kids running away from home and trying to make it on their own.  Yeah, we don't follow too many of the normal rules, have our own way of doing things, but somehow, someway we found a way to make it all work. Do the Brut and Zappa still fight?  Yes, they have their moments and confrontations, but they are no where near what they used to be.  Is it tough?  Yes, it is the toughest, tiring job I've ever had.  Are their any rewards?  Millions.  We have the 24 Paws of Love made up of the awesome Back Dogs and Front Dogs.  Would you do it all over again?  Absolutely. 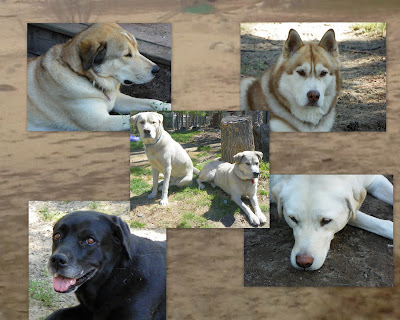 Tomorrow, I'll share my dilemma that lead up to this purge.  This is our first time in our dog owning life that we feel like we have people who care and support us, so we would like to extent our trust to you for your suggestions and ideas.  Brainstorm with us.  We are looking forward to hearing your thoughts.  See you then!
Posted by 24 Paws of Love at November 17, 2011
Email ThisBlogThis!Share to TwitterShare to FacebookShare to Pinterest
Labels: aggression, behaviorist, dogs, hope, trainer

Good for you!!! HOPE is so very important!!! We must never lose hope!!! You and your husband should be commended for doing your absolute best by all 24 paws!! Blessings to you my friend!!

So thankful that you never gave up on your dogs. Too many people do, and that is such a shame.

I think a lot of times, the solution to your problem is grounded a lot in your perspective of it. You never saw it as an insurmountable problem. Sometimes you just need a new perspective on it!

That trainer only gave you hope because you were looking so hard for it. You knew it was out there and you just keep reaching for it.

Your dogs are very lucky to have you. Good for you in never giving up!

Hope floats....that trainer just brought all yours right back to the surface! They are lucky to have you...will be back tomorrow for more...