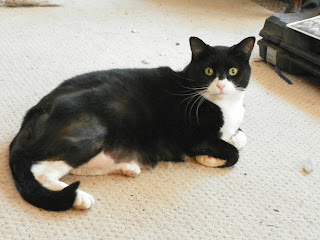 OBNOXIOUS??  Like she's got a lot of room to talk!!
You may remember THIS POST about Boxer, my obnoxious cat that I built up resentments towards because his behavior and temperament is the complete opposite of my previous mellow, laid back cat Sparky that I found myself still grieving for.

A QUICK RECAP:
About the time Boxer became more than I could bear, was about the time I realized I was harboring such feelings toward him and we began a process of healing.  Pamela’s Challenge came along about the same time and I began by focusing on our evening lap time with simple ’reward and ignore’ techniques to calm him down.  It worked beautifully and we began to bond again.

I claimed that if all I ever had with Boxer was gentle lap time, I had conquered everything and I did, but Boxer, being who he is, didn't stop being his pushy, demanding self the rest of the time.  We weren't through yet.

AND THE CHALLENGE CONTINUES…
Boxer’s overbearing attitude and presence made me realize I had to start building some boundaries between us.  Using my hand as a gentle block, like I use with the dogs, didn’t phase him in the least, he just kept pushing himself towards me.  Then out of a reflex, a threw up my foot to block in front of his face and he instantly stopped.  Finally, I was on to something.  He had to think for a few minutes and when he went to swerve around, bam!  foot in face.  It took a little reinforcement until he got the message, but it worked!!

An amazing thing happened out this action, we began to understand each other and learn how to read each other better.  Since I am so hypersensitive and Boxer being so strong willed and determined, we are finding how to work together and ease into our lap time.  When he comes at me with such force, I tell him “NO” with my foot.  I continue this until I see his attitude soften.  Which only takes a couple of times if that.  Then I use my hands which say “wait” or “not yet.”  We will continue this dance of coming closer and like minded, one step at a time until I will invite him on my lap or he has snuck in close enough to make the initiative himself.

I can not tell you how many times I have cringed when I would see him rallying towards me like a heavy weight boxer gearing for a fight and I never knew what to do.  Boxer is one powerful cat, not just in size but in willpower and I always felt plowed over by these combined strengths.

This simple body language has changed our relationship even further.  There is more respect between us and we are enjoying each others company with the bonding that has ensued because of a foot that means “NO” and a hand that says “not yet.” 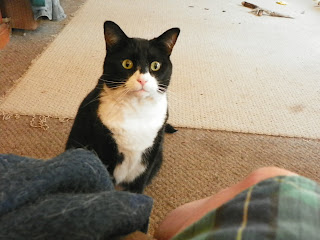 OK, how about now?
Now if I can figure out a way to keep him off my chair every time I get up, I think I would be in heaven.  MOL!!
Posted by 24 Paws of Love at March 28, 2012
Email ThisBlogThis!Share to TwitterShare to FacebookShare to Pinterest
Labels: cats, training

.,lol good that he understand what you want him to do...

Glad that you two have reached an understanding!! xoxo Chloe and LadyBug

I'm so thrilled that you're continuing the training challenge with Boxer. It sounds like you've come a long way.

Great progress. Ahh, the power of communicating and understanding the means:)

Momma says what a pretty pretty kittie! I don't like kitties... but momma does!
-Corbin

Oh, but a cat thinks he owns everything in the house, so it's he who allows his humans to sit in his chair. MOL

He is such a handsome guy!

In any relationship, human-human, human-dog, human-cat, it all comes down to the same two things: respect and love.

Sounds like you are both hearing the music to the same dance at last.

Hrmm. Mommy is thinking of trying that on Tagar.

That cat has such great facial expressions! Is he saying "Errr when exactly were these socks last washed?!!" Deccy x