If there were such a thing as "The Dog Training Police," my husband would be busted over and over.   He would probably end up on a lifetime parole and have weekly visits where the dog training police would decide if he needed to be hauled into "Spoiling the Dogs Rotten Rehab."

"Another 30 days Mr. Daddy and then maybe you'll get it right."

"But officer look at those sad, hungry faces, can't you see they need another treat!"

But for all that Daddy lacks in dog training, he makes up for in love and occasionally, a brilliant idea or two, like these: 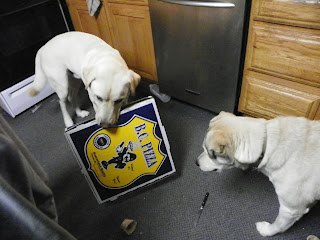 Look Blaze, how's this for a snack?
Daddy left it on the counter for us!!
Snack Time:  Daddy likes chips and dip while watching evening shows, so wouldn't it stand to reason that the dogs would like a nighttime snack as well?  So instead of staring at drooling dogs, every night is treat night.  Sometimes it is something as simple as a biscuit while other times it can be as elaborate as soup bones or six saved up used peanut butter jars.  Another tradition that started with Silver and Alex and that has carried on with the new generation.

Treats Before Leaving House:  This one is a favorite of mine that Daddy started when we got Silver as a puppy.  He always felt so bad about leaving her and wanted to make our time away on as happy as possible.  Now mind you, Daddy has never read any dog training books, it was just out of pure love and compassion (and lots of guilt) that he wanted to make the dogs feel better.  He would try to use the treat as a good distraction to run out the door and hope they hadn't noticed we had left.  A feat he still tries to accomplish to this day.  Regardless it was rather ingenious, considering we didn't hear about this until a few years after we had already been doing it. 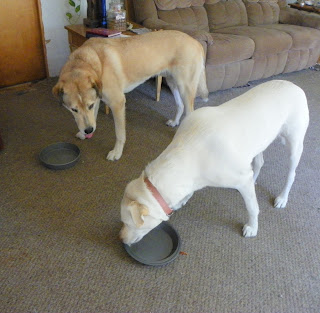 Did they say there were refills after the first bowl?
Filling Food Bowls after Meals:  6 dogs in a frenzy while filling bowls before mealtime began to turn into quite a raucous when Daddy came up with fantastic idea of filling their food bowls as soon as they were done eating and before they came out of their rooms.  This not only saves time but cuts down on the frantic commotion that was causing all kinds of crazy when getting their meals ready before eating.  This along with keeping Brut in his room before and after meals, also eliminated added friction of his food possessiveness.  Keeping everyone a little bit calmer when it is time to eat.

This one has been huge in changing the dynamics of mealtime and scores big in my book.  So were going to give Daddy 5 points for this one!

So while Daddy will probably always have a lifetime membership at Doggie Training Rehab, he's been racking up enough points for a "Get Out of Jail Free" card when they come to take him away again and again and again.... 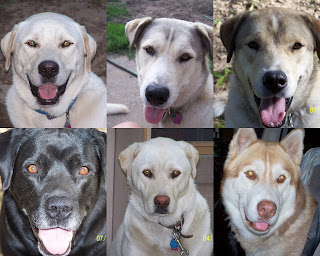 Thanks for all the love Daddy and letting us get away with everything!!
We love you Daddy!!
Posted by 24 Paws of Love at March 23, 2012
Email ThisBlogThis!Share to TwitterShare to FacebookShare to Pinterest
Labels: dogs, food, training

We think that's the bestest daddy in the world! Can he convince our pawrents that its excellent idea to have night-time snacks?

I think your Daddy ROCKS! :D

Ingenious saving up used peanut butter jars. They are so fun to clean! :)

And treats every night? Should be a law I'm thinkin ;)

You got that right. I was LOLing at the fact that Daddy's want to make lives so much easier that they'd rather think of ingenious ways of doing something rather than settling for the ordinary.

P.S. I read your Rant at the Shelter. This sounds really awful and the worst part of being a dog lover is having that feeling that you want to help but couldn't give them what they truly desire.

I hope you have a good weekend. Listening to that angry dog certainly deserves an innate sense emotional accomplishment.

I bet they all appreciate Daddy's late night snack time. Kelly begs us for baby carrots every night. She gets quite insistent!

Jay is notorious for breaking rules with the dogs and training-- no wonder the suck up to him all the time. I guess in our house its Mom's job to make all the rules?
I never thought to give them used up peanut butter jars, that's a great idea!

Now I want a PIZZA!