Monday Memories-Man, I Miss Having a Retriever 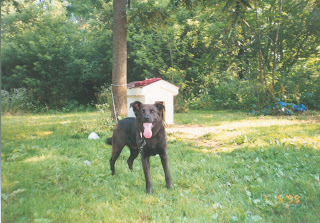 My first boy, Jep
I never realized how much I miss having a retriever, until we got into Huskies.  I used to have a dog that was part Black Lab/Sheperd, but had more of the Lab attributes.  Jep was an awesome first dog, easy to train, and could play fetch for HOURS!!  He never tired of it and if I did, I could just sit down and still play with him.

I used to make up fetching games and our favorite was hide-n-seek, where I would throw a fetching toy and then run and hide, staying there until Jep would find me.  I still play this game with Silver and sometimes Chance and Blaze.  I don't know if it just a stereo typical thing to play fetch with a dog or if I really enjoy watching a retriever "do it's thing," but I really miss it.

Silver's game of fetch is for me to throw the ball and we both chase after it.  Not always what I have in mind after a long day!  Brut, Chance and Blaze, might go after it and might bring it back, but if it last past a couple of throws we are going over what their Husky minds can take.

I just never realized how much I missed having a little more retriever instead of so much Husky override.  Maybe someday I will have one again...


All it ever took was a pop bottle with some liquid for weight and Jep was ready to go!
I really miss that boy. 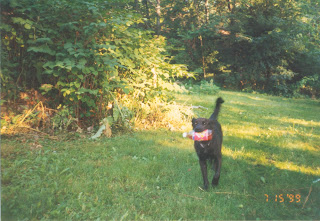 Get ready Mom, cause here I come!!
Posted by 24 Paws of Love at March 26, 2012
Email ThisBlogThis!Share to TwitterShare to FacebookShare to Pinterest
Labels: dogs, fetch, retriever

My Zeus can't seem to figure out what is 'retrieve' either.. he chases after the thing and sits there chewing it =/

Yep, we retrievers will not only play with you, but help you out with your daily chores...pickin' up after the kids (little or big), handing you stuff you drop...and the list goes on and on...

Ooh! Ooh! Mommy plays the run and hide game with me -- I love it! I never thought that some doggies would play fetch in their own way, but I guess we're all different! :)

My pits don't fetch but Madden does! She is crazy for playing fetch. You can say, "Madden, go find your ball!" and she goes running through the house to find it and runs outside for fetch. She will also play fetch with anything you throw with her-- doesn't have to be a ball.

I know what you mean. I had a border collie mix and she loved playing fetch. She might have had some retriever in her because she really enjoyed playing in water and when I took her to a nearby lake and had her tennis ball, she was smiling from ear to ear.

Yeah, when I threw the ball for my huskies, it was I throw the ball and then I had to go fetch it while they looked at me like I was crazy.

Jep sounds like he was a pretty special boy!

Now that we have our first retriever, my husband is living his lifelong dream: exercising a dog while sitting on the couch.

What lovely memories of Jep! Siku loves to play fetch in all of its forms; YoYoMa will play but with more restrictive rules because of his blindness...but the others, they say why throw if you want it?

He is a handsome fella!!

Jep sounds like he was a great dog! I guess you have to be a bit ball-crazy (like me) though.

Awwwe! Sounds like you had lots of great times with Jep!