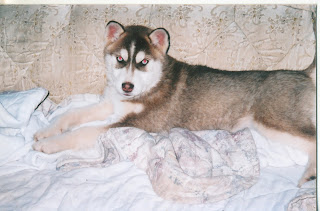 Who is this little guy???
We were looking for a stud for Silver when we stopped at our friends house who was a breeder. As she paraded the six boys out my eyes immediately caught the curled over tail, short ears and bushy, gruff exterior of one particular dog. I whispered to my husband, “That one has Chow in him. I don’t want him.” A disdain I’d developed towards Chows after witnessing a vicious dog fight as a child that still permeated in me. I absolutely refused to have a dog that I saw as violent and malicious in my home. And so we chose a red and white Husky.

We were unable to locate the breeder at the time of Silver’s heat and in a hasty decision went with another dog from another Husky breeder. Silver did not get pregnant.

The following year we again tried to locate the original dog we had chosen from the first breeder and finally found him with another mutual breeder friend of ours. When we tried Silver with him, they stood and looked at each other. End of story. So when this breeder showed us a litter of Husky pups about 4 weeks old, my mind started turning. With two failed breedings and everything feeling like forced timing, I turned to my husband as we pulled out of the driveway, “Maybe we should just get our own stud.”

We went back the next day to the breeder with the fresh litter of pups. I had my heart set on the black and silver one with a black masked face, only to find he had already been spoken for. Then he held up this little orangish-red male in the palm of his hand and my eyes and heart locked on him. I knew he was the one. The only one. I swear that even in the dark of the night, heaven’s light was shining on him. :) We would pick him up in a couple of weeks when my husband gave him the name Brut, after the cologne. 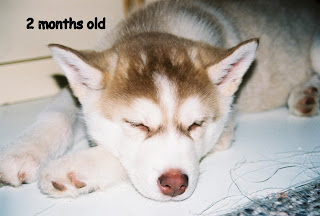 Months later after Brut’s aggressive personality began to unfold, I came to learn that the Husky/Chow dog that I had shunned in the beginning was actually Brut’s Grandfather, Storm. Storm was half Husky and half Chow on Brut’s maternal side of the family. I struggle for a good year or so with this knowledge because of Brut's dog aggression and finally through Brut and our healing together have come to a peace with it. Who would have thought that a breed I didn’t want in a dog that was my heart dog was just who I needed to heal that terrible tear in my life. Coincidence? I think not. 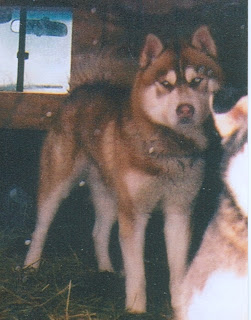 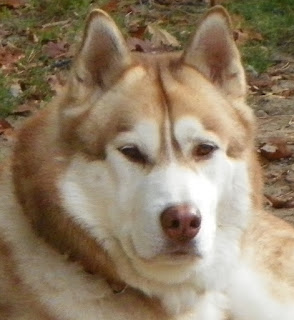 Coincidence: An act of God that wishes to remain anonymous.
Posted by 24 Paws of Love at August 20, 2012
Email ThisBlogThis!Share to TwitterShare to FacebookShare to Pinterest
Labels: monday memories, puppies

Coincidence: An act of God that wishes to remain anonymous. Brilliant! Have a wonderful Monday.
Best wishes Molly

Isn't it amazing that so often our best laid plans melt away to reveal a plan that turns out to be greater and more perfectly suited than ours? Things work out as they should.