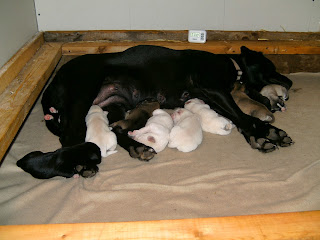 It might surprise you that I wasn't 100% on board with my husband, Mark and having puppies.  I'd been part of the dog world for some time and Mark met me with pure innocence when it came to dogs and other pets.  It was natural in his world for dogs to reproduce, which truly by all of nature's laws, it is.  He couldn't imagine anyone not loving or wanting a dog as he pined most of his life to have a furry friend.  And it never crossed his mind that anyone could be cruel or unloving to a puppy and that every puppy would find a loving home.

But I'd grown up in a different world.  Spaying and neutering were the natural way for me.  Irresponsible breeders created a constant flow of unwanted pets that were being put to their deaths in shelters all around the country.  Unspeakable acts of cruelty and violence against dogs and cats were going unpunished.  I learned early that the world was harsh when it came to animals and those thoughts hadn't seem to change any when Mark wanted to breed Silver.

It was almost a 50/50 split for me when it came to breeding Silver.  My feelings were still strongly tied to the knowledge I had learned over the years.  While embracing this young innocence of Mark and the hope that could aspire from it.  When it came time to breed Brut and Silver I had an inner peace that we were doing the right thing.  Once Silver was pregnant, I didn't have time to think about all those laws and statutes I was breaking.  There were tiny lives depending on me and what guilt I did have seem to slowly fade away. 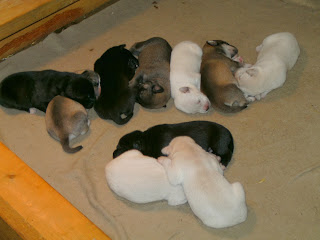 Then those ten miracles of life were born.  And it didn't take long for the fear of a new dog mom to feeling the normal fear and anxieties that come with new life.  It wasn't much longer than that the fears of all I knew made me part of my own reality.  Suddenly I was the "breeder" with ten puppies, whom I did not trust to anyone, but knowing that I couldn't keep them all.  They could end up in shelters or dead.  Suddenly I was the cause to the dog overpopulation.  And the reason some may not get spayed or neuter.  They were harsh terms that I took literally.  There was the fear of not finding homes for them all of them and the fear of having to keep the ones that were left.  Suddenly, I was exactly what I read and heard about all my life.

I will never get over the miracle of Chance and Blaze coming back.  Being returned to us as a total surrender.  That the owners thought that much or at least gave us a thought to bring them home, must say something.  Because it was the miracle of these two dogs that I sit here today and write this.  Were we just lucky?  I don't think so.  For it was just this morning that Chance and Blaze literally woke me up out a bad dream that was about to get worse.  Another example of them being part of our lives.  And that there is purpose and reason as to why we are divided into two packs.  I've heard them sing together several times throughout the day in accordance to what I am doing.  I saw Fiona playbow to Chance from across the fence line when Chance and Blaze were playing.  That was exciting!

No one can tell me that those puppies weren't meant to be.  Even when Angel and Grumpy died.  No one can say I did the "wrong" thing or that I did it for my own selfish pleasures or gain.  I've always done everything in my life for the dogs.  And if there is anything I learned out of that harsh reality of thoughts I grew to live by, trusting my dogs has always saved my life.  Every. Time.

Haven't you ever felt that deep inner desire to do what your heart and gut says is right, despite what others think or the world's standards? 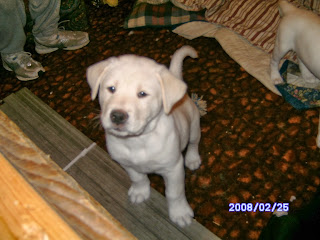 Just who says I can't be here??