I have had a hard time putting this post into words.  I have tried and failed many times on paper and in my head.  This whole experience blew my head away!

Let me back up.  For those who don't know our dogs aren't very sociable with other dogs and my brave friend and her courageous dog Callie has decided to take us on.  Our first walk was HERE, when Zappa went out of his way to get a reaction out of Callie with no luck what so ever.  He was so confused because no dog has ever acted that way with him.  They've always been ready for a fight.  Yet Zappa has a softer spirit when given the chance, it is how Blaze and him became fast friends.  So right now he's getting most of the practice with socializing.

Now here's the low down on how it all happened:


Zappa and I headed out to the corner where we met with my friend L only to find that she not only has her dog Callie, but her mom's dog Tippy as well.  For a second I wasn't sure about taking on two dogs, when I realize Zappa hasn't barked, jumped, lunged or reacted in any way.  He was walking calmly and relaxed and I think he enjoyed getting out of 'pack mode' for a while.

So L and I are walking and talking, when a van pulls up and it is somebody she knows.  She chats with the older couple who also have two small dogs in their laps who are making a bit of a fuss.  Still no reaction from Zappa.  Not paying one bit of attention to the dogs.  My jaw is almost touching the ground. I can not believe this.  Is this even my dog?  Mr. Mouth Zappa who has to say something about everything?

So we carry on to the corner, where the 'invisible fence' dogs come flying around the house to their stop line.  I don't even think Zappa lifted his head as he continued to mosey down the past them.

And that's not the end of it!  As we made our way to the end of the road, there was a BIG black lab and a smaller scruffy dog hanging out with their owners who kept the dogs by their side.  Again Zappa calmly passes by, TWICE as we turn around and head for home.

THIS WAS ALMOST GETTING TO BE TOO MUCH!  BUT I WAS LOVING IT!!

On our return route Zappa was starting to get curious about these two dogs who weren't reacting to him or that he had to react to and began venturing into the middle of the road.  Did I mention this whole walk L and I are walking on opposite sides of the road?  And Zappa was weaving back and forth towards Callie and Tippy.

Being that I am 'Brut programmed' and have learned to take everything with caution and baby steps.  I am not ready for their to be any contact yet.  This is all brand new for me and I don't trust it 100% yet.  I've just been through too many dog fights and feel the need to protect not only Callie, but Zappa too.  Though it is obvious Zappa has adjusted faster than I have to the whole process, I'm still going to take my time.  This was a huge step and some major progress for both Zappa and me.  And there is nothing I want more than to have it be as positive as possible.


Man, it was nice to run into dogs and not have a crazy dog on my hands!

Tell me has anyone else experienced this socializing their dogs??  This is so cool!! 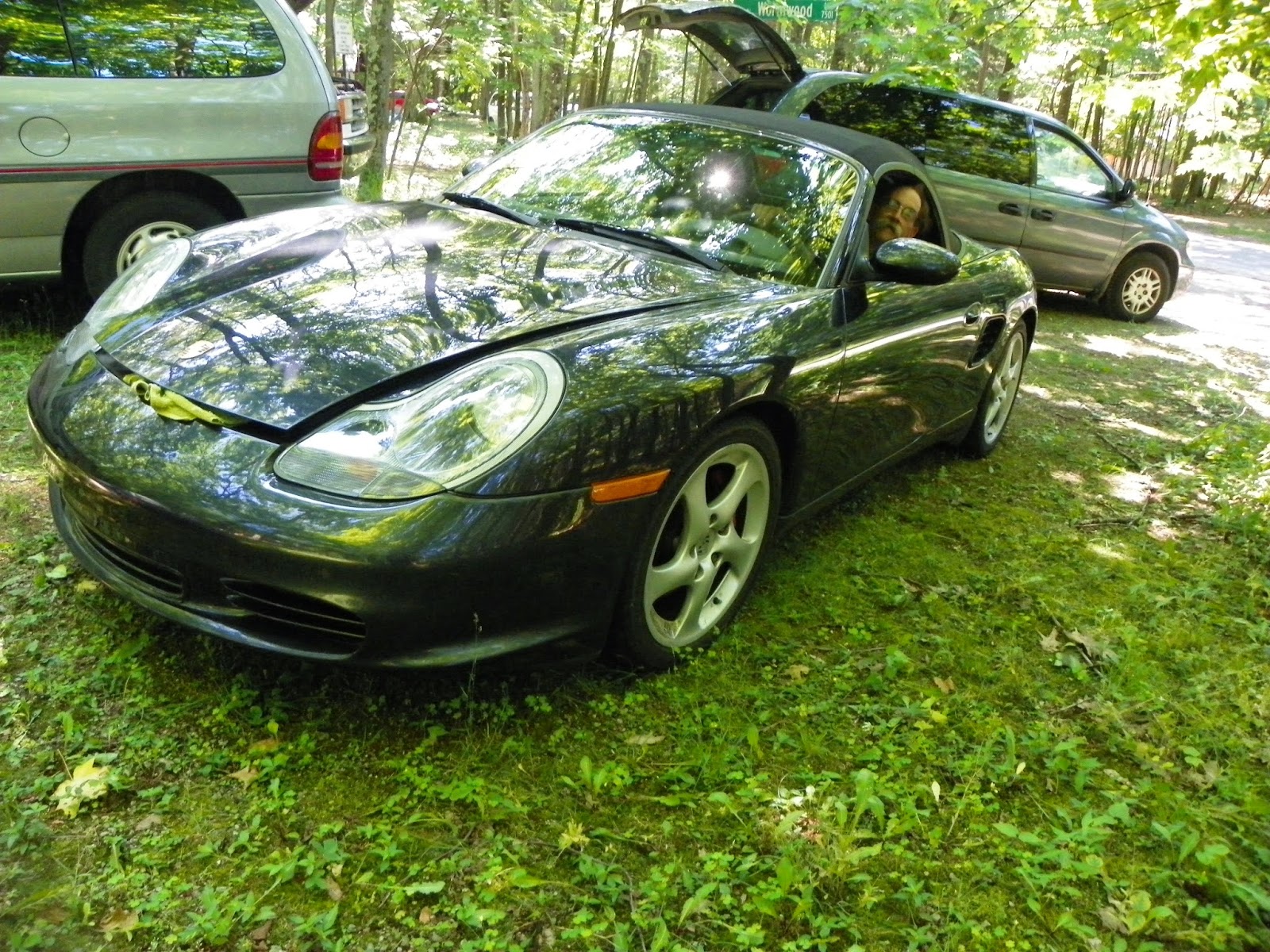 This is my husband, Mark who got to sit in a 2004 Porsche Boxster and looking cool as hell!

The car crew from White Dog Army was the only one who had it right!
Posted by 24 Paws of Love at August 11, 2014
Email ThisBlogThis!Share to TwitterShare to FacebookShare to Pinterest
Labels: dog walk problems, dog walk training, dog walks, dog warning signs, dogs learning how to socialize, dogs socializing

Onwards and Upwards. What a success but we sure understand you want to take it slow. Fingers and paws crossed that Zappa really does learn to chill with other dogs.
Have a terrific Tuesday.
Best wishes Molly

Zappa is doing VERY well! The Plan is a good one and there is no need to rush things, take your time and let it play out. Big cheers for the ENTIRE walk teams!

Dad is going to be so happy he got the car quiz right. He loves the car even though the WDA would never fit!

Be sure to stop over later in the week, we have some exciting news that we will be sharing.

That's so awesome! Monty is reactive on a leash, but we have so much luck with introducing him to new dogs by taking them on walks together. We've even been able to house sit dogs, as long as we walk them together first.

Wow, what a big thrill! Way to go!

Honey has played a similar role to Callie in providing a calm walking partner for reactive dogs. Zappa is obviously a sensitive dog. And I think he picked up on Callie's calmness and modeled it.

It's good that you realize that you also need to respond calmly in response to Zappa doing so well.

Persistence and going at a slow, gradual pace with tandem dog walks is so powerful for reactive dogs. We haven't had the incredible breakthrough you report, but have witnessed gradual progress with Fozzie, to be sure! Great work and keep it up--it is so great that you have a friend and an unflappable canine co-conspirator to work with!