What's a "rough day" for Brut? 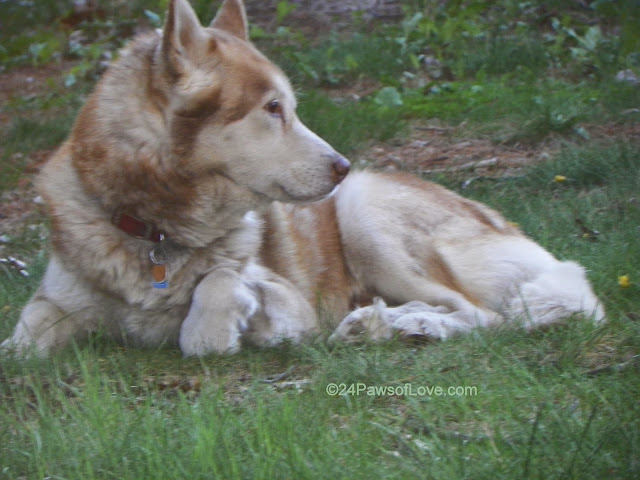 I just wanted to let everyone know that Brut isn't in any pain.  I know his pain signs and he isn't showing any of them.  He may uncomfortable or not feeling well, but he not in pain.

When his blood pressure drops, he has a difficult time moving, like getting and up down and he has a wobbly walk.  He is very sleepy and will only get up food, water, and using the facilities.  I usually keep a water bowl right next to him so he doesn't have to move, when he isn't feeling well. 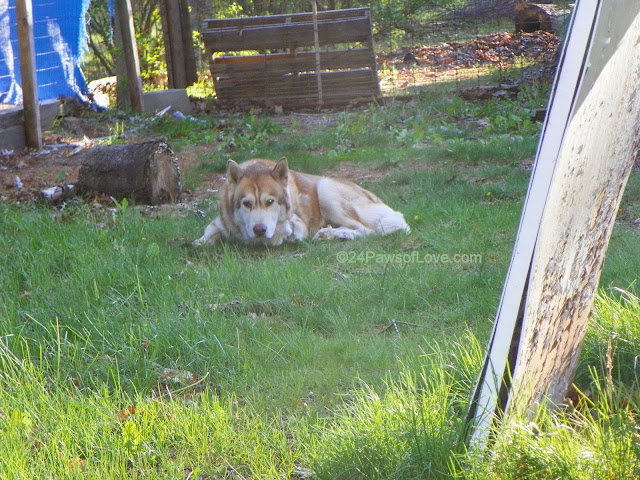 Brut was feeling a little better today than the last few days.  He laid outside for most of the day, but was alert with his head up most of the time.  The last few days of not feeling good he could barely lift his head or stay awake for any length of time.  Brut got up and down more often and walked to further corners of the yard and although his walk was still wobbly he was making the distance.  As oppose to yesterday when he did get up he stayed close to his hole that he lays and only for the basic necessities.

Being outdoors must make Brut feel better, because every nice day we have had he has been out well after dark.

Brut growled at Zappa and Fiona when he became possessive of me and his territory.  So believe me he's still has a lot of fight and life left in him.  He ain't going down easy.  :)  And we respect his right to life by making him feel like the king that he is.
Posted by 24 Paws of Love at May 22, 2015
Email ThisBlogThis!Share to TwitterShare to FacebookShare to Pinterest
Labels: bleeding in dog abdomen, bleeding internally, Brut, change in dog moods, dog high blood pressure, low blood pressure in dogs, mass on dog spleen, power of the paw, prayer

It's good to know that Brut is still fighting. Keeping our fingers and paws crossed that he will win the fight!

Thank You so very much Lavi,DADDY DOG BRUT Will Win this fight

Sending hugs and well wishes to Brut and you. Paws crossed
♥♥♥Wyatt

I'm glad he is not in pain. Great to hear that he is enjoying being outside in the fresh air. Keep fighting, Brut!