This has been difficult to write.  I have been putting it off trying to process the information.

I told you about Fiona having liver disease, well we found out after a hunch and blood work, Blaze has it as well.


This past year we got DNA test for Fiona and Chance.  Well we also got a health analysis with it.  At this time we already knew that Fiona had liver disease, but it was discovered that Chance carried the same gene for it.  Which lead me to getting Blaze tested after witnessing some of the same symptoms that Fiona had before treatment.  Well, Blaze's liver levels were quite high after getting blood test.  That's when we figured out that this was genetic.

Blaze is on the same medicine as Fiona and is responding slowly.  They are both taking Urisidol and Denamarin to keep the liver going.  How long it will last is a guessing game, but for now it is working.

We will be getting blood work for Chance and Zappa's liver levels in the next few weeks.  Chance is showing any symptoms right now, but I have some suspicions about Zappa.  I hope I am wrong.

It's been a little bit of an emotional rollercoaster dealing with all of this information.  I thought the scare of Fiona was enough to last me, but now Blaze for certain and possibly Chance and Zappa.  Scary stuff. 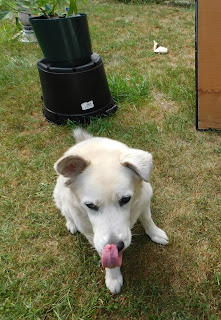 Keep the 24 Paws of Love in your prayers.  Thank you.

Hugs to all of you. We hope for the best for all the pups.

I know how you are feeling. When we lost our boy Chip to bone cancer, and shortly after our girl Hannah was diagnosed with it too. It's soul and heart crushing. But Fiona and Blaze are getting the most love and best of care, from you who would never give them anything else. My best of vibes and prayers coming to you from my corner of northern Virginia.