Silver, Why Are You Crying? 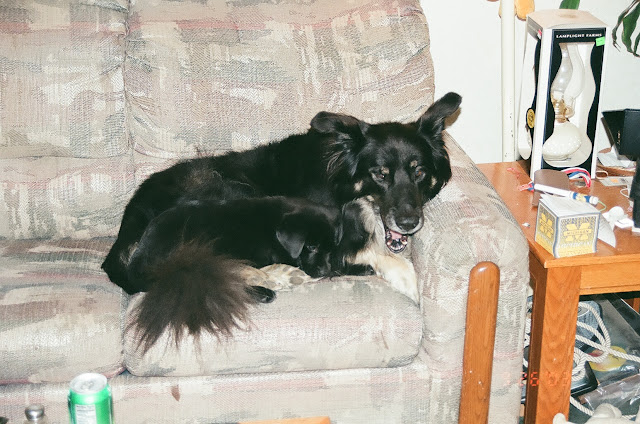 Can you see me cuddling with my best friend Alex?

Silver was an intense dreamer from the time we brought her home.  As a young pup in deep sleep her eyes would flutter, her ears would twitch and her paws would flicker as if running.  Sometimes she gave low growls or high pitched yipes and her tail would start thumping.

At bedtime, after Daddy would sing her 'Rock-a-bye-Baby,' Silver would crawl into her 'den' under our bed and we'd all fall asleep.

Then suddenly I would be jolted upright by the sounds of intense sobbing from under the bed.  In a panic I would reach under the bed as far as I could to soothe Silver in her distress.  Her dreams seemed to be a of grave pain as her body would heave with sadness and shake uncontrollably.  Almost every night the cycle would continue until sometime after she had her litter of puppies.  Then they began to diminish.

I have often wondered what she dreamt about that seemed to bring her such sorrow.  Sometimes I would think it was because her best friend Alex was going to die some day.  For I've seen her have 'happy dreams' after he died when I believe she is reunited with him.

I have never had a dog that dreamt so intensely and none of the other dogs do it to the extent that Silver does.  Sometimes it scares me as to what she could be dreaming about that seems to upset her so much.  I wonder if she is having nightmares or if she is 'seeing' something that we can't.  I wonder what it means that they don't happen as often as they used to.  What changed in her little world that brings more comfort than before?  I still believe her dreams were centered around Alex, but like a Tootsie pop, the world may never know. 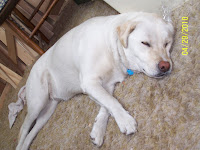 And for our friends in Japan,  Paws Crossed with Prayers
Posted by 24 Paws of Love at March 15, 2011
Email ThisBlogThis!Share to TwitterShare to FacebookShare to Pinterest
Labels: dogs, dreams, friend, sleep

We wonder how much more the Japanese can endure - news of the radiation leak has to be just overwhelming for them. We have our paws crossed too.

We have three dream weepers too. Mom wonders the same as you.

Aschiuta also has very vivid dreams and some aren't too happy. Silver might have felt that she would lose her friend Alex and that's why she was having sad dreams. But we may never really know... They can't tell us when they wake up "You won't believe the dream I had! I was [blabla]".

my wabbit dog see med to be enjoying his dreams. We felt he was chasing something. Stumpy, on the other hand, looks worried in her dreams. But she's a worrier, anyways.

I almost didn't see little Alex until I biggified the pic!

None of us are dreamers like that, but we do sometimes do the paw twitching and a whine from time to time.

Aw, Bella sometimes has vivid dreams, but these sound really intense! It's so hard as the person not to be able to know exactly what's going on in those puppy brains!