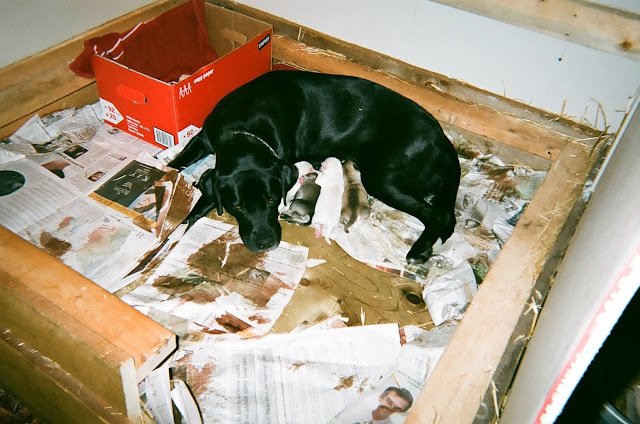 Silver and with her first four pups

Before and during Silver's pregnancy I read as much info as I could about the births.  I found everything I could and had piles of information.  I was also in contact with a breeder online to help get that hands on knowledge that can be lacking in written material.  Regardless of how much information you find, it is nothing like the real experience...

When Silver was ready to give birth to the first puppy to be born we were both in shock when she gave birth standing up and Daddy caught the Zappa in his hands.  We removed the sac that is wrapped around the pups, rubbed him to dry him off and stimulate breathing until he cried and then cut and tied the cord.  I had read plenty about caring for a  newborn after birth, but what I was not prepared for was Silver was more interested in cleaning herself than her newborn pup.  We were told over and over by other breeders that Silver would know what to do.  After Zappa was born I was a nervous wreck, we had nine more puppies to go and it looked as if Silver was not going to nurse or take any interest.

I made a frantic run to the kitchen to throw together formula and a bottle.  Mistake number one, I bought powdered formula.  I was so nervous I struggled with trying to just read the package for the measurement.  Somehow I managed to pull it together and ran with a bottle back to the whelping room.  Only in time for the second puppy to drop in Daddy's hands.  We took care of this puppy as well while Silver took to cleaning herself again.

We couldn't get the bottle to work.  So Daddy ran to the kitchen to pierce the nipple better, while Silver started to contract again.  As I was calling for Daddy, I caught puppy number three in my hands and had to do the entire newborn procedure by myself.  We were becoming real pros, real fast.  Daddy came running back with the bottle and it wasn't long after that puppy number four was getting ready to enter the world.

A miracle happened before puppy number four was born, Silver climbed in the whelping box and laid down to give birth to Chance.  She took care of Chance and when she was ready, we moved all the puppies in close to her and she let them nurse while she cleaned them.  Silver began to relax for a few minutes and we took a much needed breather.  We cried and laugh in relief as Silver finally took over her responsibilities while we watched in wonder and fear at the miracles that were before us.  Squirming around, crying and suckling on their mother and we still had six more to go...

The rest of the births went smoothly and were spaced further apart so that we were able to breathe a little and prepare as they happened.  The first four births were about 20 minutes apart, which may seem like a lot of time, it wasn't.  By the time we had the new one cleaned up and worrying about how to feed them, Silver would start contracting and we were doing the whole process all over again.

My research and reading paid off in many areas, but there were a few things we weren't prepared for.  Luckily everything worked out, the puppies were all healthy and Silver was being a good mom.  It is interesting some the things we didn't find in the books and internet, like Silver standing up.  I may have read that somewhere, but it was a completely different story when it was happening in front of your eyes.  We were both assured Silver would automatically take care of the pups, so it never occurred to us that she wouldn't and we were only semi-prepared to handle feeding 10 puppies if Silver decided she wasn't going to.  Thank goodness she came back to her senses or instinct kicked in.  As with everything in life, books only teach you the basic, it becomes a completely different ballgame when you actually experience it.  And what an experience it was!
Posted by 24 Paws of Love at March 21, 2011
Email ThisBlogThis!Share to TwitterShare to FacebookShare to Pinterest
Labels: birth, love, monday memories, pregnant, puppies

While I didn't have an experience like this I well remember the excitement and nervousness of 'my' first litter of pups. It took about 8 hours for my Sheltie to have her 4 pups, during the night of course, lol! It certainly is an amazing experience being there when the puppies are born:)

That must have been one amazing experience. Thank dogness Silver decided it was time to be a mom.

That must of been just amazing! I hope one day to be able witness the birth of a litter, it makes me nervous, but it's just one of those things I would like to experience!

I've never heard about dogs giving birth standing, but I suppose it might be more natural for them than for humans.

It sounds like you went through a very exciting roller coaster ride, helping deliver pup after pup. I'm happy everything turned out all right.

What a wonderful memory to have. Thanks for sharing today!

What do you think?

Sounds amazing! My mom would have been a nervous wreck trying to take care of pups herself!

Pamela- you would not believe the horror stories I have read about doing research and talking with breeders of all of the things that can go wrong. In my opinion I don't think it is something that children shouldn't witness, because there can be many complications, plus less people in whelping room the better. And it can be a very scary experience. We were very fortunate to have such a healthy litter, but there are many times that isn't the case.

I'm so glad to hear about all your research and preparation. That's what responsible parenting is all about! And despite everything that was thrown at you, it sounds like you handled it well. Birthing puppies is scary stuff - you really never know what could happen. Thank goodness mother nature is so well equipped :)