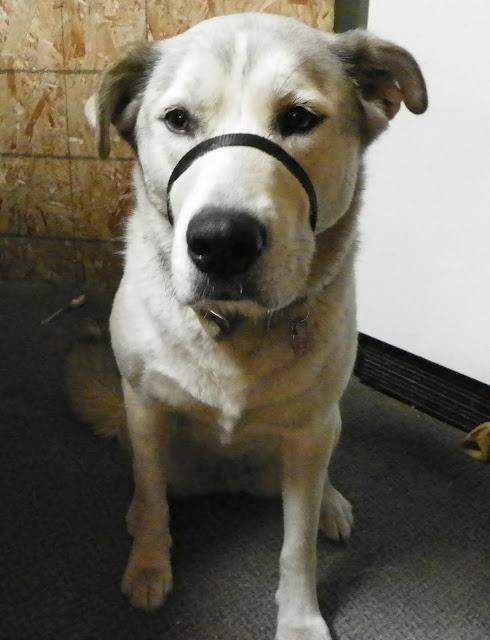 What a little hot dog and a head halter can do!!  I had a great start with Blaze on practicing her leash training.  I almost want to pinch myself!  This couldn't be the same crazy, wild dog I tried this before??  Blaze was so great!  Once she grasp what we were doing, it was almost like she couldn't get enough of it.  Like she's just been waiting for the opportunity to learn.  I was so proud of her, I felt like I was going to burst!

I started Blaze by putting on her no-pull head halter (like a Gentle Leader) and we walked around the yard several times in the heel position.  Once she settled into that, I worked with her going out the gate.  Which is usually our breaking point.  She thinks she's at the Kentucky Derby when the bells sound, but with a little discipline and the wonderful head halter we were eventually able to go in and out the gate and into the driveway.  This really couldn't be the same dog that was pulling my arm off, could it?  Another thing I was surprised at was that she wasn't fighting the head halter, at all.  That was a huge plus. This was the first time I had a leash hooked to it so that she was getting the correction and it didn't seem to phase her a bit.

I was very happy with our results and almost didn't want to stop, but I didn't want to overdo it either.  It was so much fun and very exciting.  As I have stated before, I have tried this with Blaze before, it isn't a completely new concept for either of us.  I have always just struggled with doing those baby steps and usually bypass them by jumping in head first.  I think time and maturity have done wonders for both of us.  I am very impressed with Blaze and myself and ALL of the baby steps we have taken in the last three years to get to this point and I am excited at what all is waiting for us to discover together.

You can read our starting point with It is Blaze's Turn
Posted by 24 Paws of Love at May 10, 2011
Email ThisBlogThis!Share to TwitterShare to FacebookShare to Pinterest
Labels: head halter, leash, training, walks

I struggle with that temptation too, especially when things are going so well. Everyone says to keep training sessions short and stop with your dog wanting more, but it's so hard sometimes. You want to see how much better you can get. It's kind of an adrenaline rush.

Good for you and Blaze! It's so awesome when all the hard work finally starts paying off. That's why taking baby steps are so important as the results are so much more impressive!

Great work! Good luck with the next step!

Gentle Leader-type harnesses are great! They certainly help when you have a dog that pulls! I've used them with both Sage and Toby. Toby never liked it though. He's gotten much older and doesn't pull anymore. Sage pretty much always walks well on a leash so I don't really need it for her.

I saw your comment about the Wall O' Waters. Yes they work well and you can set your tomatoes out much earlier if you live in a cooler climate, like I do. Sorta like a greenhouse. Here's their site: http://www.wall-o-water.com/

Isn't it exciting? Learning to walk without pulling can open up so many opportunities for Blaze. It's such a pleasure to walk a dog when you finally start communicating with each other instead of one of you (and it's sometimes the human) who just doesn't pay attention.

Congratulations on your progress.

I'm glad things are going so well! It's really rewarding when training pays off and you see the results in a deeper relationship! :)

Oh, congratulations! I'm so happy to see this.

Great job Blaze! AND mom! Little steps will guarantee success...and don't be disappointed if there is a backslide day here and there! You are a TEAM now!

I have been using the Halti head collar with Kirby for 3 weeks, not so much for pulling but it did help that, but more for his dog reactivity. It has helped me get him to focus on me when he is around other dogs has made a huge difference for him. Keep up the good work!