Did You Chose Your Dog Based on Color? 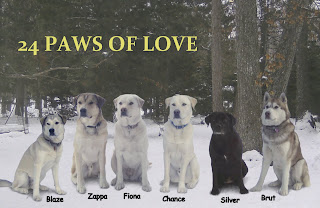 I have always had a thing for black dogs and cats.  Black, black, black.  My first three dogs were black and I had a black cat.  Three out of four had some white on them, but overall they were black.  So how in the world did I get 5 light colored dogs?  That darn Brut.  When my black and white Husky pick was already chosen, the breeder held up Brut, the heavens sang and blah, blah, blah, my whole world changed. 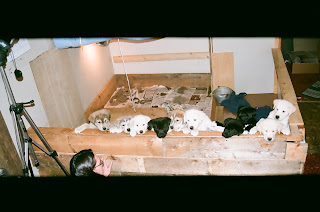 When Silver and Brut had ten puppies, four white, three black with white chest and paws and three Husky looking ones colored from sable to grey, again my world was turned upside down.  Four WHITE puppies??  I remember the look of horror and surprise that passed between my husband and I, who was going to want WHITE puppies??  It still blows my mind that they were the first to go.

Zappa was a given.  He could have been purple with yellow polka dots and we were keeping him and of course I had my heart set on one of the black females.  Then when the pups were three days old, I watched Fiona the white runt, fight with all of the determination and soul to get to the "feed bag" after her siblings.  My heart did flip flops and I decided right then and there, she was a keeper.

After many days of see-sawing with whether to keep the black female who had stolen my heart in so many ways, I finally had to come to the realization that having three puppies at the same time was probably not the wisest choice, black or not and I laid her in the hands of a dear friend where she found the home she needed.

And while it was the hardest decision I made giving up my little black Angel, my dreams for a black dog haven't died.  My ultimate dog is an all black Husky mix with blue eyes.  I have never had a blue eyed dog and actually not sure if I care for the color, but I think the contrast between the black and blue would be awesome!

So have I based any decisions based on color?  On the overall no because I didn't chose any one those first three dogs or my cat, they were given to me.  It's no secret that I have always had an attraction to black animals and when I chose Brut, I definitely did not choose him for his color but he put a spin in my black dog vision and turned it completely upside down.  Or is that right side up??  :) Whatever it was, it was I have come to appreciate the variety and beauty of all of them.

So tell me, how much did color influence your decision in choosing your dog?  Or was there something else that drew you to them first?  Have your opinions changed over time or do you tend to stick with your favorite colors?  Did a particular dog or dogs come along that gave you a completely different perspective?  Did you choose a specific breed for their color?

Posted by 24 Paws of Love at July 30, 2011
Email ThisBlogThis!Share to TwitterShare to FacebookShare to Pinterest
Labels: color, dogs, puppies

Greyhounds are awesome because they come in a rainbow of colors.

Secretly, or not so secretly I am passionate about the white and black cow dogs.

I've never chosen a dog because of color, they always pick us.

Mom says she could write a book about the colors of the dogs in her life, past and present. But to keep it brief, our all-white blue-eyed husky Dakota came to be a part of the family because it is what Dad had always wanted and she came to him at a time in his life when he really needed a nice surprise. Phantom came along because our human brother and sisters decided Mom needed a black and white "traditional" husky for her 50th birthday. Thunder joined the pack after Mom went through a heartbreaking search for a light red and white female pup, and ended up with a gray and white boy. And Ciara, well - she just won everyone's heart from the first pic the humans saw. Of course, our dream is to one day have another all-white sibe. They say dreams do come true - so maybe you will find that black blue-eyed sibe mix and maybe our wish will come true too.

Somehow, the last 3 dogs we've had have some variation of black fur. Maggie was a blue merle which has some black to it, Toby is black with a brown undercoat and Sage is a Black and Tan.

When we first stated decided to get a dog, we picked Jada based on her breed, then it came down to the color. We wanted black and tan and there she was!! :)

I've never chosen a dog based on color, and I think that's part of the reason I've been able to have such good connections with the dogs we've had. When we started looking for our first Greyhound, I hoped it would be a brindle, but there were only four cat safe dogs in the kennel. All four were different colors, and each one was stunning. It was the brindle dog who leaned against us and stood between us for equal petting, though, and of the four, she was the only one to look back at us as she was led back to the kennel.

After she passed away, we went back to the same adoption group. I wanted that same deep connection I'd had with Treat. I really hoped that time that a brindle dog didn't choose me -- I just didn't want to feel that I was replacing her. We met a dozen dogs, and nearly all of them were brindle, but I never felt that click. Finally, they offered to let us meet a little female they'd just gotten in. She was so new, they didn't know much about her and hadn't even cat tested her. The tiniest little Greyhound I'd ever seen walked in and leaned against me so calmly, and looked up at me with eyes the color of amber glass. I was smitten immediately! She could have been hairless at that point! I am ashamed to admit that I used to think fawn dogs were plain, because Bunny is just stunning!

Do I have Greyhound color preferences? Yes! I'd love to have one in every color they come in! lol But I've found that the dog who claims your heart and couch is always the most beautiful one in the world!

Yes, I lean towards black dogs or cats. 4 of my cats are solid black and 3 of the dogs are black. I had the pleasure of sharing my home with a male husky black/white with one blue eye and one brown eye and a female husky gray/white with the brightest blue eyes I've even seen! Most of my pets are rescued, so in the long run, it really doesn't matter what color they are if they need help.

At the greyhound adoption group where we got our three, the dogs are matched with their families based on activity level, personalities, cat safe etc. I never saw Veil or Beckett until the day I went to pick them up, but as soon as I saw them, they were beautiful to me. We were Maddy's foster family and she ended up staying with us, so I didn't pick any of them for colour. When the new loads come up from the track, there is always one or two that I am attracted too, but usually for the look in their eyes before the colour. They could be the one with the baldest butts and most scars but there is something in the eyes that draws me in.

I think it's so interesting that you love black dogs.

I've often wondered why that was and thought maybe it has to do with the fact that it's harder to see the eyes of a dark dog with dark eyes.

Shadow (my previous dog whose on the header of my blog) was mostly black but had those interesting eyebrows. I think the eyebrows attract people because it lets them read the expressions more easily.

Anyway, I'm drawn to beautiful dogs--color doesn't matter. But I'd have a hard time figuring out what kind of dog isn't beautiful! :)

Interesting thoughts :) I'm laughing cause Mom adopted me cause she thought I looked like a goof, smiled easily, was interested in everything, and had no issues whatsoever just being myself. ;)

I've never chosen a dog based on color. Before I got Layla, I wanted a Malamute with the plain white face but now I love her markings. I still wouldn't care for one with the full mask and bar across the face, but I still know that personality is more important than markings.

My next Malamute will (hopefully) be grey like Layla. I don't want a black one.

Although I've never picked a dog based on color, I have chosen my rabbits that way. One of my rabbit breeds has 32 color varieties, so I'd pick my favorite.

Well, Goldens only come in one color, so there's not much picking to be done!

We picked the breed for their temperaments, and we pick the pups based on the same. :)