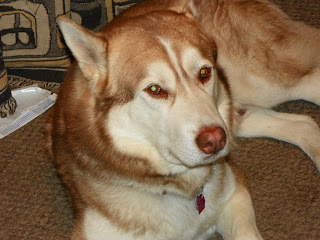 It's a tough job, but somebody's got to do it!


For those of you who don't already think I'm a bit on the crazy side when it comes to my observance of my dogs and their relationship to me, this next story will seal any doubts you might have had  :)

I was walking Brut, it was practically dark and we came up on the main road that runs to town.  There are a few businesses that were closed and a couple of restaurants that were just getting ready to close up, when Brut and I started down the road.

I tend to get nervous around people in general, so when I saw that the street was busier than normal, I began to stiffen up.  There was a guy on bike coming down our side of the road, before he was close, Brut stopped and began sniffing around.  Now if I hadn't have seen it with my own eyes, I would have balked at what I'm about to tell you.  He was looking at me out of the corner of his eye!  I kept this sideways gaze while thinking, What is Brut doing?  He looks like he's pretending to sniff.  Brut would be the first to tell you when he stops to sniff, all of his focus and concentration is on that scent.  He doesn't pay any attention to me, so something about this was different.  As the cyclist neared into sight, Brut nonchalantly started walking very casually forward without one inclination towards this cyclist, which in itself was amazing and we carried on. 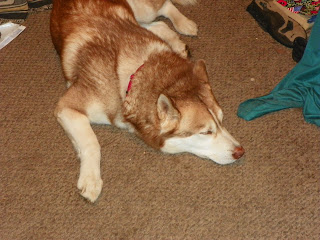 Taking care of humans all day is exhausting!

Now if that had been the only incident, I would have called a fluke, but it happened two more times with a skateboarder and some people coming out of the restaurant. I kept my focus on Brut "sniffing" as these people approached and he kept me in his eye sight, and when I began to relax, he started moving forward.  I was enjoying this game while completely trusting in this big lug, as he lead me down the road.

When we turned the corner to head home, I wanted to scream with joy!  Brut silently took the lead and was teaching me how to relax around strangers.  To someone else it looked like a girl walking her dog, little did they know it was that my furry friend that was leading the way.  I haven't been able to wipe the smile off my face every time I think about it.  I was so proud of both of us.  He actually helped me to face my fears, in a way I couldn't have done without him helping me.  It was just that simple.  It had been a really bad day, I was in no mood to walk, but he kept insisting that it would be good for us and it was.  It was one of the best walk ever.

So what do you think?   Active imagination?  Or the will of dog who knows her owner all too well and was carrying out his angelic mission?  And you can't hurt my feelings, I already know I'm crazy, dog crazy that is!!  :)
Posted by 24 Paws of Love at August 23, 2011
Email ThisBlogThis!Share to TwitterShare to FacebookShare to Pinterest
Labels: anxiety, dogs, walks

Hello there
GREETINGS FROM SOUTH AFRICA!
I came over from Helen's blog to pay a visit.
I am really touched by your post today because it echoes so much in my own life - the anxiety which my own story (MAXDOG, THE BOOK) is about. I know just how debilitating anxiety can make one.
Let me reassure you - you know your dog and he knows you. There is a reason for what you notice in his/her behaviour.
Enjoy the gift of reassurance he gives you...:)
By the way - you have a beautiful blog. You write inspirationally too - something I love.
Its nice to make a new friend.
Sending lotsaluv
MAXMOM IN SOUTH AFRICA

Without a doubt, Brut was there for you and your needs. No questions asked, just there to help.

Dogs are very good at knowing what we need.

Perhaps Brut was showing you calming signals--and he probably expected you would follow suit by dropping down and sniffing the ground yourself!

Congratulations to you both! Sounds like he is an excellent human trainer :)
Kirsten
http://peacefuldog.blogspot.com/2010/11/another-calming-trick-yawning.html

Will of the dog for sure!!

Hahaha! It's okay. We're all a little nuts so you are in very good company.
Who knows? Maybe Brut really did sense something. It's definitely possible and it's comforting to think so at times.

Brut KNEW. His actions were purposeful and with a plan...and most wonderfully, were customized to what he knew would work for YOU!Cherish your special bond it is truly a blessing.

That's why dogs are so therapeutic - they can sense when something is wrong with their humans, and - somehow - they have the ability to help!

I've often said that our dogs take their cues from us... they read us! Since we hike in a natural area off leash, when we encounter new comers, I've learn to force baby talk out of my mouth...my calm submissive voice keeps the dogs calm and submissive.