Today I was in a funk.  By early evening, I felt like a failure as a dog mom.  Somehow all of my best laid plans and good intentions were washed down the drain.  The world seemed to crash down hard on top of me.  I saw no hope in being able to make any changes for the evening hours as I sat with Chance and it began to sprinkle.  I had nothing left to give as I hung my head and shook a weary fist at this world.  Defeated.  I sat as the drops kept falling. 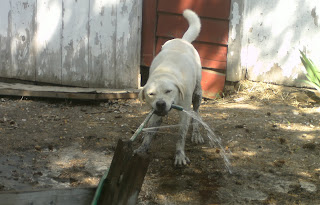 Come on Mom, is that all you got!!
Chance was my healer today.  As we sat in the rain, I'd left the hose running, his greatest love.  I watched him run to and fro with it, twisting, pulling, all around the yard.  I was almost going to go in and take my misery with me, when something stopped me and I picked up the hose and began to play tug-of-war with him.  Pitting all my strength against his.  In this friendly but competitive challenge,  I channeled my negative energy through that hose to hold my ground.  And more times than not I surrendered to this white warrior.  As the tension in my brain began to break and rain fell harder, the challenge was taken to the next level.  To get the hose from Chance and not let him get it by swinging it around while he did some of most acrobatic twist, jumps and moves I have ever seen a dog do.  Phenomenal!  I was in totally awe.  Astounded.  That boy is something.

When I finally came in, I realized I'd only felt a temporary release and that my feelings of failure had come rushing back.  I had devoted all of my available energy to one dog and there were five others that had been left out and it was pouring.  Eventually I found myself in front of the computer, searching for something and then I found a video I had saved:  GoD and DoG by Wendy Francisco.

And suddenly it all began to make sense.

I came to realize that I am extremely blessed with not just one, but two "Heart Dogs."  Brut is one and it just dawned on me tonight that Chance is the other.  I have always known that both Brut and Chance are my spiritual leaders and there is a reason they are both leaders of two equal packs.  Which had lead me to the realization that I need two leaders in my home and could not be done if the dogs were all united.  There is a reason that is deeper and stronger that can not be questioned and brings a greater peace of mind just knowing.

That is what I was suppose to learn today from Chance and because the communication between the two packs is strong and viable, everyone already knew that Chance was the only one who could teach me this lesson.  The agreement had already been made between all of the dogs and my feelings of failure were wiped clean.
Posted by 24 Paws of Love at August 24, 2011
Email ThisBlogThis!Share to TwitterShare to FacebookShare to Pinterest
Labels: dogs, heal, heart dog, spirit, water hose

What a lovely tribute to Chance and Brut!

That's a video I have special fondness for also. What would we do without our dogs?

I get in those funks too!

You certainly have a great Heart dogs:)

Be gentle on yourself, dear friend...

In teaching us,they ask us to teach them...

With love
MAXMOM IN SOUTH AFRICA

I'm there with you, fighting a depression that is hard to lift. I too, marvel at how my dogs help me.

I've been catchin' up on your blog...got lots more blogs to catch up on too...my Human has been runnin' ragged the last week or so...

Anyway, I'm so happy you are finally realizing we pawed ones are put here for the soul purpose of caring for you humans.

Some people NEVER learn and dump us. If we're lucky we end of in rescues and get a second chance. Some of us are lucky and our humans realize we only want to help and comfort y'all.

There's more truth than many realize in that statement that the world's best therapist is a puppy licking your face! :)

It is wonderful to walk on your journey with you and to share the Eureka moments. What an amazing family you have!