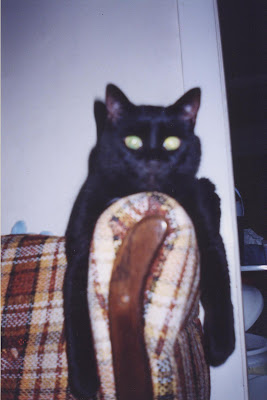 My absolute favorite picture that sums up everything about Sparky
While I am an avid dog lover, my presence has been graced with some the most awesome felines created on this planet.  Today is all about the coolest cat that ever lived named Sparky.

Sparky was smooth and mellow like cool jazz.  He would've been the one with the stand-up bass, head hanging low, thumping to every groove in his soul.  He had that down and dirty style that shone with a heart of gold.  Luscious black fur that was almost sinful to run your fingers through and a white triangle on his chest for an added stamp of class.  No, no, no, there was no cat like Sparky.

I was honored with this awesome cat when he was just over a year old. My roommate at the time brought him home and I still remember those yellow owl-like eyes as he took me in, slowly twitching his tail while he hung out on the window sill.  He was intriguing and beautiful, I could barely take my eyes off of him.  There was something to this cat named Sparky. 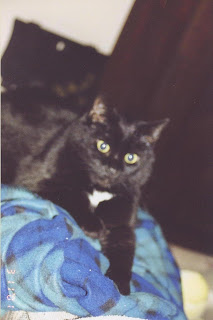 I don't know that I could ever put into words who he really was and the intensity of knowing him.  Cats are so much more mysterious than dogs, but his mystery resonated deep in my soul.  I was unaware of how deep our bond was until he was diagnosed with cancer at 14 years old and would live another full year.  A week before his passing he rebounded, bouncing around like a kitten and I began to believed he was OK.  We had a scheduled work trip that weekend and I left Sparky in the hands of our vet.  Looking back, I think deep in my heart I already knew.  I barely said good-bye to him when we left, I just walked away.  When the vet called the next day, I knew.  His body was shutting down. It took 250 miles of separation to let Sparky go, it was that painful to bear.  God only knows I would have never given him up on my own and that it would take a higher intervention to say good bye to the coolest, most awesome cat in the world.

The vet froze the body so when we returned we could bury him.  We took prints of his paws in plaster and laid him to rest.  When we moved I was torn, I couldn't bear the thought of "leaving" him, and actually dug up some of his bones to transfer them to our current home.  He was my first pet on my own and I have never met another cat like him.

Yeah, there's was something about that cat named Sparky.
Posted by 24 Paws of Love at August 15, 2011
Email ThisBlogThis!Share to TwitterShare to FacebookShare to Pinterest
Labels: cat, cool, death

He sounds like an awesome cat! One of the reasons I've had our dogs cremated is because I can't bear the thought of leaving them behind if we ever move, either.

Sparky sounds like a very special part of your life and a wonderful friend, I am sure he knew how much you loved him!

Sparky was clearly very special and very much loved.

That was a very nice tribute to that handsome soul.

Sparky was awesome and was there at the perfect place and time in your life. That can never be recaptured; not would you truly want to. As Dr. Seuss said, "Don't cry because it's over, smile because it happened."
You were blessed...and I believe, so was Sparky!

Thanks for sharing Sparky with us! He was so beautiful!