So if you've been wondering what has been going on since our last post when we asked for your suggestions on how to help break up fights between Brut and Zappa, here's the latest so far:

Since my husband is a trigger point, the first thing we changed was Daddy's greeting line up when he comes home. Now I greet Daddy first, then Brut, then the rest of the gang. Once I start waiting at the door, they all line up behind me, without anything being said. Instant stress reducer! Thank you Kootenai's Climb for that great suggestion!!

Thanks to Jen from The Elka Almanac who suggested that instead of calling Brut's name when he feels in a threaten position, to use another recall word. I couldn't think of anything, so right now I have been using "come," until I think of something else. It has been working.

Third was making shaker cans (empty pop can half full of pennies)...for every table. An idea many had suggested.

My first try out was on Mr. Mouth Zappa. He has a demanding and insistent bark when I am getting food bowls out that strikes up the energy at meal time something horrible. I could not get him to quit. A good shake of the can cut him right off. Next meal time, a couple light shakes and he stopped. The next meal time...blissful silence. Today when I got their bowls out, something felt amiss and then I realized Mr. Mouth's siren wasn't going off. It was heaven!!

So it worked to stop Motor Mouth Zappa, but did it work on a fight?

I am a bit unsure about sharing that we are used this method. Some of you expressed concerns with things like the shaker cans and of the like. First let me say, I do everything in my power in the way of prevention, unfortunately life isn't perfect I can't dog sit Brut every second of the day. I do my best to keep him safe and take every precaution with him. We have been in such a lull lately, his aggression caught us off guard as it tends to flow in waves. Let me also say , the shaker can or any other deterrent we are only using when an attack is imminent. This means when there is no other choice and neither of us able to reach stop Brut in time, otherwise setting off an attack. While ideally it would be great to change his behavior and eradicate it forever, arresting direct contact in the seconds before an attack becomes the priority. We have ruled nothing out at this point and we have taken everyone's suggestions into consideration. The few above changes we have made have made a difference already. We have to do everything in baby steps, one step at a time.

The two incidences we had were both at the point of no return. Brut was in what I call, locked target mode. There was no time to respond to either of them. Any movement I would have made would have sprung at attack. The shaker can worked. In the first incident Brut jumped back and ran over to me rather surprised. The second time he was a bit more challenging, but he kept direct eye contact with me the entire time I shook the can. He finally relented. Had I not had the shaker cans in these instants, their would have been contact and a jump to pull the dogs apart
.
I have taken things a step further with a hands on, direct contact when Brut is just starting to show signs of feeling threatened and the need to defend himself. Before I was only using my voice, now I have been going over to him and blocking his "target" and getting him to focus on me. This has been extremely effective and I plan to implement more of this preventive measure when Brut's guard goes up.
Do I believe the shaker can is the cure all? No. But I do know it was better than tearing two dogs apart in the middle of a fight. Would I use it again? Yes, if the threat was immediate and I had no other way to stop it. Believe me, it isn't my first choice. I prefer and strive by every possible means to use prevention and the results are much better.
We can not thank each and everyone of you who commented and shared your suggestions. What a difference a few small changes have made. Brut's aggression as of right now is mild right now compared to a few weeks ago. You can never have enough tools and ideas when it comes to our dogs. I don't know how to thank this blogging community again and again for the support that showers on each day. For a person who has no dog-loving friends on the outside world, I can not express the joy of talking dog with all of you. :) 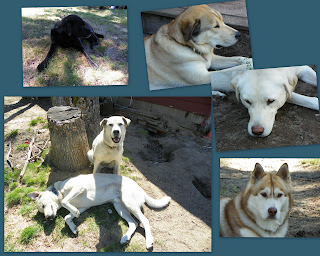 If a shaker can works, then more power to you! I haven't used one in ages, but maybe it would help keep Toby's mouth shut when someone comes to the door. Worth a try!

There's nothing wrong with using a shaker can. The idea is to get a dog's attention and I know full well how difficult it can be when two dogs are staring each other down with only one thought in their mind - fighting. I use a water bottle that helps to get their attention on me, but it won't do any good to break up a fight.

I can usually stop a dog fight before it starts by watching their body language, but it's easy to miss some of the more subtle signs that can start a fight. What works best for me is to get in between the two dogs wanting to fight and start backing one of them up as long as I can get there before they start to rumble!

Ignoring the dogs while you greet your husband first is good. Humans are the leaders and need to be greeted first, then on down the line with the dogs.