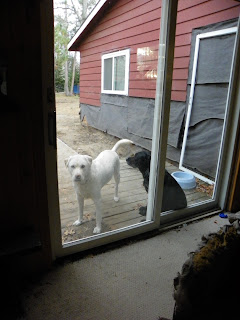 "Just a minute, again?  How many times does she think she can say that and get away with it??"
I found out that if your dog is waiting and barking at the door, telling them, "Just a minute," for some reason doesn't stop them from barking.

I started using this phrase when Brut was still young.  If for nothing else but for myself. Telling them, I'll be right there.  Or I coming, hang on.  I still use it.  Here's the weird thing, they are suddenly catching on.  Five years later, when I say, "Just a minute," they quiet down and wait for me.  Including and especially Zappa because once his mouth gets rolling, there's little that will stop it.  It is like somehow, someway they all caught on at the same time and have picked up on the value of those three words.  So I have no idea what cosmic forces have joined together in the 24 Paws of Love little universe, but they seem to be pulling all the dogs into an understanding and after four years, I'd say it's about time they finally got it!!

Do you have any phrases that you use more for yourself that your dog caught onto?
Posted by 24 Paws of Love at December 02, 2011
Email ThisBlogThis!Share to TwitterShare to FacebookShare to Pinterest
Labels: dogs

Mine is similar to yours, "Wait second boys." and then they sit down and stare at me:))

I've tried using "just a minute" but my dog chooses to ignore it completely. It's just a waste of breath. Yet, she has caught on to "would you like a treat?" It boggles the mind... ;-)

This photo is super-cute!

My mom says, "Kootenai please don't do that," and I stop instantly. The vet finds it so funny. I only do it if you say "please," though! But wait a minute...BOL

I say to my dogs, "back up" when I'm trying to get everyone through a closed door. I need them to back up so I can get the door open. One day it dawned on me that when I said to back up, they all had been backing up and waiting for me to open the door. It's so cool to train a dog when you don't even know you're training them. Goes to show how observant dogs are to us.

Momma uses "Party manners, please!" whenever we are getting too nosy about what is on the coffeetable or are otherwise acting socially rude. I totally get it; Quinn does and YoYoMa do too and my sisters are getting better at responding (of course, Nuka is deaf but momma STILL says it to her)!

I say 'hang on a sec' but I've never noticed if there's a reaction or not! I guess I'd notice if there wasn't?

I started saying "excuse me" when I needed my dogs to get out from underfoot. And it always works. :)

I always laugh at hubby when he tells Morgan to "play nice"! I don't think she's picked up the meaning, but he likes to think she has!