A Million Miles of Baby Steps 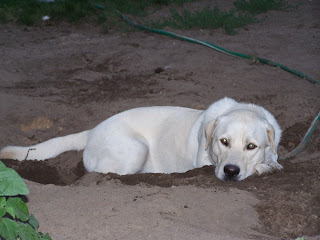 Have you ever suffered through a trauma and had to almost start your life over from scratch?  And all of those baby steps you were taking seem to amount to nothing?   Take a lesson from Chance those baby steps add up.  Three years of baby steps and Chance met the receptionist at the vet.  The V-E-T!  The most petrifying place where strangers touch and poke you.  It was on his terms, outside, next to truck and he was great!!  It was a wonderful feeling when he accepted the treats from her.  A clear sign he was safe and comfortable.

This after I'd already took him in to be weighed for a sled harness I am ordering him.  Just the event that occurred inside the vets office was amazing.  You would have thought we had planned it.  Chance pulled me full steam ahead and went straight to the scale.  Like he knew what we were there for or that it was a safe spot of some sort.  I don't know  With no command, he sat on it without as much as a flinch until it read 85.5 pounds (38.7 kg). When I gave him the OK, he pulled me straight for the door.  When I told him to 'stop" he turned and sat while three of the staff sat and talked to and about him.  Everyone at a polite distance.  He was actually relaxed.  I become so relaxed talking with the receptionist that I didn't move quick enough when someone was coming to the door, even when she had warned me.  Chance instantly went into self protective mode and snapped at the receptionist when she went to comfort him by reaching to pet his head.  She told me later she shouldn't have done that.  I should have moved when she mention the incoming person.

So after Chance and I walked around the grounds a bit and I had him back in the truck.  I wanted to leave on a better ending.  That's when I mustered up the courage and asked the receptionist if she would come outside for a better goodbye with Chance.  I was so glad I did.  Meeting people at home is so much different than meeting them out in public, for both of us.  But I was confident with Chance.  It helped me to realize when the receptionist made the comment that Chance wasn't going to let her touch him.  That made a key difference for me to find where his comfort level was.  Where his boundaries are right now.  Accepting treats out of her hand was one thing, any other form of touch was crossing a line. 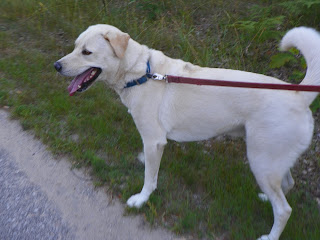 It has taken many, many baby steps with Chance, from being brushed, looking at cuts, flea and ear medicine to being bandaged or touched and that is just with us. It takes both my husband and I to take him to the vet.  And he has come along way since the first time.   Touch for him is very extreme and nobody knows exactly what happened to him those months after he left our litter and our hands.  All we know is some things in life take their own time to heal.  Time that we have been so wonderfully blessed with this beautiful boy, twice.  And this my friends is our sweet moment of victory and what a million miles of baby steps can do!


We are so proud of you Chance!
For those who may be new readers, Chance is a pup from our litter who was returned to us after 8 months, ribs showing, neglected and abused.  Every step with him has been a miracle.  You can read more about Chance HERE.
Posted by 24 Paws of Love at December 13, 2011
Email ThisBlogThis!Share to TwitterShare to FacebookShare to Pinterest
Labels: baby steps, dogs, miracle, vet

Isn't it that he can learn to trust all over again? Deccy x

We are so proud of you Chance

It is truly wonderful that he can trust again! Thanks to YOU! Blessings to you!!! Way to go Chance!!
xoxo Chloe and LadyBug

Congrats on your progress, Chance!

I completely admire you and all you are doing... One of my own dogs was a rescued breeder dog who lived two years of her life tethered in a shed. I know how big those moments and successes can be!

What a wonderful story that Chance is back in your care and safe. Good luck with your baby steps!

Go Team Chance! It is proof of your strong relationship and hard work that he has come so far. It takes a long time to learn how to trust again. I think dogs are braver than humans in this respect. Very smart on your part to know how to read his body language and to know where he is more comfortable. It's the sign of a great vet clinic that they are so understanding as well.

Way to go Chance. Proud of you

We are so proud of Chance AND of the nurturing safety you provide. Your boy had had to learn to trust not just once but twice. Healing takes as long as it takes but how far he has come is a radiant beautiful triumph!

Oh! I'm so thrilled that Chance has come so far! I'm sure that you're very proud of him- and rightfully so. He'll keep progressing, since he has you there as his support. Bravo!

So wonderful, and so proud! :)

I've been looking forward to getting caught up on my blog reading all week. This post is just the kind of thing I love to read.

You've made such great progress with Chance. And you are fortunate to have a vet office willing to work as partners with you.