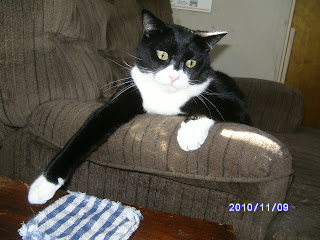 I could write out a long in depth post about what lead to taking on this challenge with my competitor in question, but simply put; I've had resentments towards Boxer because he isn't my former cat, Sparky and Boxer has resentments, well, because he is a cat!

THIS IS NOT A 'NORMAL' CAT
I was completely disillusioned by Sparky and two previous cats (all whom have passed on) who were mellow, affectionate, and cool as cucumbers and I thought all cats were that way.  Then I got Boxer and suddenly I was dealing with this wild, obnoxious cat who demanded my attention and didn't care how he got it.  And while I would like to blame his behavior on the dogs, he has always been this way.  More dogs just gives him more reasons to be ruthless. 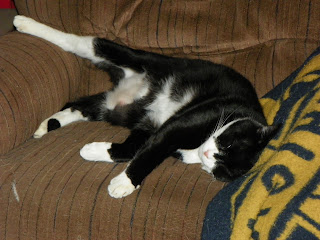 Just let her try to sit down!!
MY LAP WAS OUR BATTLEGROUND
Every night the war would begin with this 16 pound cat, who according to the vet was not overweight, where we would have our battle of wills.  He would stand on my lap, I mean just stand there on my tired-end-of-the-day-legs like dead weight.    Then he would slowly turn around, doing his 'claw dance,' butt in my face all the while jerking and knocking me with head butts that had the force of a miniature ram.  I in turn would hide my arms behind my back, or try to get him to lay down, until my sensitive nerves couldn't take it anymore and I would push him off my lap.  Or I would try to pet him, hoping to calm him and it would only rile him up more.  I almost dreaded our nightly visit and these battles only fueled my angry feelings towards him more.

SPARKY NEVER ACTED LIKE THIS
And there was my struggle.  I'd missed my heart cat so much, I just couldn't accept that Boxer was nothing like him.  I hadn't even realized that I'd had built up these resentments towards Boxer because he wasn't Sparky.  A few months ago I became aware of how much these thoughts and feelings were hurting our relationship and that I needed to change the course we were taking.

THE HEALING PROCESS BEGAN
I began by letting go of Sparky and focusing on Boxer.  I started practicing more patience and kindness with Boxer, but we were still struggling with his demands for affection. So when Pamela's Challenge came along, I seized the opportunity to improve our lap time by using simple "ignore and reward" technique.  When he was quiet on my lap and/or being gentle, I would pet him.  When he got too pushy, I hid my hands.  It was simple. And it worked.  Not only did our lap time improve, but our over all relationship took a dramatic turn. We are not having those large uproars on my lap every night.  Now, we are enjoying each others company and I am beginning to see Boxer for more of who he is, rather than who he is not.

I am sure I am not alone when grieving for another animal to misplace those hopes onto a new one.  Boxer was never going to be Sparky and I still missed Sparky more because of it.  Their personalities are almost bipolar to each other and it has been difficult letting go of that, not to mention that these differences created a situation with a type of cat, I'd never dealt with before.  It was frustrating because I have discovered I don't know cats like I do dogs and I didn't know what to do.


Pamela's challenge gave me a way to acknowledge what I started with Boxer and our healing process and helped me to focus on one aspect of our relationship-the time on my lap.  If I accomplish nothing else with Boxer except this, I have conquered everything.  Our evenings together are almost like heaven now and I'm finding myself falling in love with that little booger all over again. 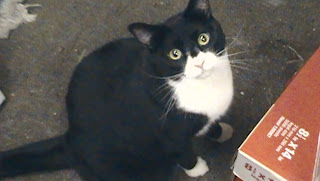 Yep!  I got her back.
I mean seriously, who can resist all this mancat savvy!!

A special thanks to Pamela and her Something Wagging Challenge that gave Boxer and I what we had been missing.  Our relationship.

What a wonderful post!! The best thing you could ever do for Boxer is to accept that he is an individual and will be nothing like your heart cat. That can be so hard, because the love you had was so intense that you really WANT him to be exactly like the beloved cat you lost. It sounds like you are on the right track. I hope this newfound relationship grows stronger and better every day. Boxer is a beautiful mancat and I'm so happy your relationship is blossoming. =^..^=

It's worth noting that most people don't try to "train" their cats, or think that cats can't be trained. I dig that you decided to confront your feelings, and work with Boxer, and I'm glad you're happy with your results!

Geez, maybe I should try this with Rosie. She doesn't battle for my lap, but instead waits until I am trying to do yoga and then decides to distract me by sticking her butt in my face. If I try to ignore her, she starts batting my hands. Otherwise (besides trying to scare our bunny), she is a love.

You may think it is something you have done, but really the cat has just taken over your mind..... hehe! Deccy x

That is just wonderful to read! I am so happy that you and Boxer now have a great relationship!

I'm glad for you and Boxer! Makes life a little easier! Happy weekend!

How sweet! I love that it was Pamela's challenge that turned things around. I have a cat that is very similar to Boxer - Nick. He has always been a challenge from day one. He does many of the same things but with age it has gotten worse. He's 19 now and demands attention all of the time. He not only demands it, but he yowls for it, cries for it, walks on me for it, etc. I'm thinking he has a little kitty dementia.
I used to love his antics and take great amusement in them. Maybe I need to follow your example and see if that works. I'm not sure yet how I can get him to stop yowling into the toilet bowl (so it echoes of course), but you've got me thinking.
Congrats on your new relationship with Boxer!

That's great! We have two cats who adopted us...Smokie was abandoned when she was about 1 and Binx, our newest, was a wild, crazy, scared and starving feral kitten. Happy to report with some training, lots of patience and even more love, my daughter now has two very chubby, vetted, and healthy cats who totally own our house. Well, the front anyway, as the Sibes have the back. And occasionally the hall and visits to the living room, when the Sibe kids are outside of course! Great post!

So often we subconsciously blame those we love for what they are not and you are right, it damages and stifles the relationship. You are to be commended for realizing the problem and making such calm patient efforts to shed those expectations and accepting Boxer for who he is.

Thanks for admitting the part you played in all of this. Many people give up on animals because it's all the animal's fault, while some would say the problem is all the human's fault. We both pay a part in our relationship. But it's up to humans to take the lead in developing and changing the nature of that relationship. That is what training is all about!

Our two cats have been with us for about 10 years now and grew up with Toby. They're still holding out on judgement with Sage...it's more like an uneasy truce. But it's getting better. Glad to hear you were able to turn your relationship around with Boxer. He looks like a real cutie!!

We're so glad to see you really getting to enjoy and love Boxer. In the beginning, mom kept comparing me with Mathilda, who went to the Rainbow Bridge before I came into her life. It took a while but I reminded her that we're all special in different ways!

What wonderful training you did - of yourself and Boxer (gorgeous). How easy it is not to consider our human feelings toward new animals but you stepped back, realized you were still grieving Sparky and Boxer was truly a new cat. Transformation for you both :). This has to be the most poignant training I've ever read. So happy for your new relationship - and Sparky will always be in your heart.
And dang, I didn't think of doing a Double Blog Hop - you ARE creative.

Boxer certainly is a handsome cat and it's wonderful that you decided to use Pamela's challenge to improve your relationship:) I hope you have many more happy, loving, harmonious moments together.

Congratulations! I am so glad I wasn't the only one wacky enough to take up the challenge with a cat. I am so glad you were so successful in taming the wild beast that was Boxer. He sounds like a lot of fun, but also very exhausting. It's a good thing he's so cute, eh?

You are officially my new hero. Not only do you live with and train six dogs but now you have cat-taming on your list of skills!

First come the apologies for not stopping by sooner. I've been really sick lately and even reading my favorite blogs or commenting has been too much more me.

But that means reading your post is all the more thrilling for the wait.

I'm so glad you had faith that your relationship with Boxer could be better. And that you are able to continue to heal from your loss of Sparky by building a friendship with your new friend.

Yes, of course cats can learn things. And you've certainly proved it.

This is just the kind of relationship-building I was hoping to encourage when I thought up the challenge. So glad you joined in and shared with us.

I'll be choosing the winner of the donation to a loved animal charity tomorrow morning. Good luck!

Well, he certainly is cute ;) Were your previous kitties tuxedos?? I've noticed (over my years of having kitties and being a cat sitter) that tuxedos have pretty demanding personalities! We have a tuxedo boy, Monkey the does his best to drive me nuts! He is the one that pesters me, wakes me up, and howls when he doesn't get what he wants. I'm glad the challenge brought you two closer ;)