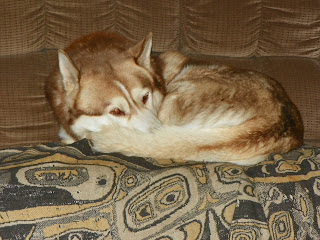 I’ve been using touch more so than any other form of communication with Brut when he gets in his testy moods.  It is by far his most sensitive receptor and one that that he responds to the quickest.  Whether it is a calming touch or one that over stimulates him.

Today, while Brut was being protective of me the protective barrier line around him suddenly flared out to include Fiona was on the couch, which meant she became an instant threat.  Fiona became trapped as Brut’s large body was blocking any escape for her.  Brut immediately translated that she was not adhering to his warning and got low to the ground, ears back, emitting a warning growl.

I gently got him by the scruff of the neck, pulled him towards me and held him in a large bear hug.  He continued his warning to Fiona, but did not fight me.  I held him tight and let him continue to voice himself, allowing Fiona to exit and for Brut to know he is safe with me.

I have done this several times since the beginning of the year when I realized how overly sensitive and responsive Brut is to touch.  One time he had Zappa backed into a corner when I got a hold of him and let him bark his warnings at Zappa while I held him tight to myself.  Zappa who once again ignored and pushed past Brut’s protective line and the warnings had it coming.  But instead Brut was safe to express himself while feeling protected in my arms.

I don’t correct him, soothe him, or try to stop him.  I just held him.  Interesting concept, don’t you think?  I also do something of the same nature when I am petting Brut and an intruder comes along; when he turns to snarl, I stop petting him, but I leave my hand on his body or head and just hold it there.  When he turns back to me I will continue to pet him.  There is something about the constant contact that gives him a security I believe he didn’t have as a young pup and dealing with his abandonment issues.  The protection and safety he was suppose to get from his mother was taken away at such an early age where he was left to defend himself.  And so I’ve become his surrogate mother.

It has helped in his overall demeanor and his comfort level.  Brut is feeling less and less threatened and any instances with the other dogs has decreased ten fold.  He will always be a moody dog with all his character defects, but if I can show him that he is safe with me without being reprimanded, then I’ve cut the battle in half.  And that’s worth more than having the perfect dog.  Every day Brut teaches me there is more to dogs than I could have ever thought.  He has taught me to think way outside of the box for exactly what he needs to help himself. 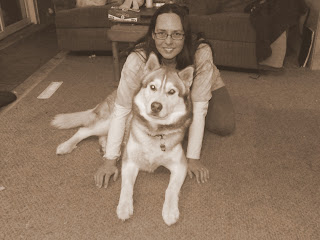 Posted by 24 Paws of Love at June 06, 2012
Email ThisBlogThis!Share to TwitterShare to FacebookShare to Pinterest
Labels: dogs, fights, touch

I have a rescued dog, awaiting adoption, that growls when any of my dogs come by me, when I'm petting her. I remind her to 'be nice' and pet her profusely when she doesn't escalate her behavior. I can tell that the 'aggressive' behavior is because she is insecure and I try not to make her feel worse. On the other hand, I do NOT want her attacking my dogs and if the behavior does escalate, I put her in a kennel to 'think about it'. I don't yell or punish, I just calmly lead her to the kennel (a 10 X 16' fen) and tell her she needs to stay there until she can be nice.

I LOVE the picture of you and Brut!

It's good that Brut, despite his past, has been able to develop that special trusting relationship with you, to the point where he feels so secure in your arms.

It's so nice that Brut can trust you! Yay Brut!!

To reinforce bad behavior with bad behavior , no brainer , what you are doing is supplementing incorrect behaviour with what is calming. You are just de-stressing your Bert by showing him your are top dog and you make the decisions. So lovely to see you care.
Bes wishes Molly

I use that same technique with YoYoMa, our mostly blind boy, who is also the biggest and most protective. The safety of my hug and the freedom to be himself keeps him calm and as he feels my relaxed state, less fearful of that which isn't always clear (like the movement of other people around him). It is an amazing exchange between us...as I am sure you feel with Brut.

Poor sweetie is fearful of losing his territory or home and I think the hugs will surely help.

I think its amazing what you are doing with him and sometimes we have to think outside the box.

Touch is such a powerful tool...it's great that you've found a simple, yet effective, way to calm Brut's anxiety!

Are you familiar with Linda Tellington-Jones? She has invented a technique of touch called T-Touch. It's a variety of touches that change the mental state of a dog.

It also includes tightly "wrapping" a dog in bandages. She finds that the constriction can help calm a dog. Similar ideas are used with autistic children. It seems you've discovered the same thing with "hugging" Brut.

Just be careful. We don't want you to get hurt. I know Brut would never mean to harm you but emotions are powerful things, aren't they? We can't always manage them the way we want to and dogs are no different.

First - beautiful photo of you and Brut! Our alpha, Harley, can get what we call "snarly" and I constantly rub and pet her to get her to come out of it while talking to her. It is an interesting concept...but one that does indeed work with some. If you try to correct Harley, it only escalates her mood to another level. Talking and rubbing seems to help...we can not hug her when she is like that, but she clears out of her mood in seconds and then is like a totally different dog. Now we've had her since 8 weeks, so it's funny she has developed this trait. We do believe she picked some of it up from our late Chelsey who was a senior Akita/German Shepherd who had the beginnings of Canine Alzheimer's after an accident several years earlier cut off her oxygen supply to her brain for a short while. She was in beautiful physical shape, but 3 years after the accident, she began to decline and quickly. One minute she would be playing with Harley the pup, the next snapping away like a snapping turtle! We believe that's where Harley may have learned her "Snarly Harley" trait. It's good that Brut responds to your hugs...I like the concept, a lot.

On another note, I would like to thank you for your support and kind words with regards to our Chloe. It's so appreciated!