The simple power of a fence 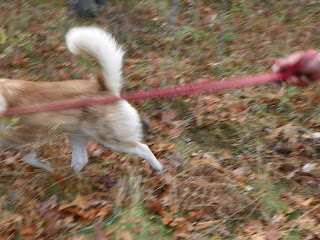 I don't know about where you live, but around these parts people don't believe in fences or tie outs for their dogs.  Instead they would rather leave them loose in their yard so that they can charge us when I'm walking the dogs.  It is beyond ridiculous.

But there is one house on the corner that has one of those invisible fences with three dogs.  Now I don't care for the invisible fences, too many chances and risks, but so far these dogs have proven themselves again and again to stay behind the line.  So what I treat it was when I walked Brut down past their house, all three dogs barking and such and Brut is just strutting like a peacock past them.  He didn't fight or lunge or pull.  As soon as he realized he wasn't going to be charged he paraded himself in front of them like King Tut!!  What a joy!!  He actually walked in the heel position without an qualms.  It was so great!!

Far too many times and for far too long dogs have been charging Brut.  He is so well rehearsed that he will just sit there and let them come as close as possible, getting them in striking range.  I have been so blessed that there hasn't been any physical contact with any of the dogs we have encounter, but there have been some close calls.  And that just isn't a fairness my dogs and I should have to live with.  Maybe Brut wouldn't be as dog aggressive if he didn't always feel like he was under attack when walking.  Would it change the his nature.  I doubt it, but it might have helped to take the edge off.

Sometimes I get so tired of accommodating for such asinine human behavior or beliefs.  What do you think? Have you struggle with walking your dogs because of loose dogs?  Do you think there would be less aggressive dogs if they felt protected from other dogs on your walk?
Posted by 24 Paws of Love at June 20, 2012
Email ThisBlogThis!Share to TwitterShare to FacebookShare to Pinterest
Labels: aggression, dogs, walks

.,we believe in the power of fence, but it would be better to let your dogs sniff and play around freely. You can do this without worrying. Consider using electric dog fence.

We do have fenced homes here but unfortunately, some people leave their dogs to wander around the streets which is unsafe especially because there are cars travelling back and fro. And what's worst is these dogs are territorial and would approach my dogs as if to attack them.

Coal with panic instantly and tug and pull and no matter how confident I am, I still have my qualms that they may attack my dog.

I believe in the power of the fence.

Oh Brut is a good boy. Here it's all fences!
Best wishes Molly

Oh, I have no idea of why people wouldn't use a fence, whether invisible or above-ground. There are so many things out there that could hurt a dog, why would you not want to protect them by preventing them from wandering? (And that they aren't terrorizing dog-walkers is of course of top importance as well.)

I don't think we have any loose dogs in our neighborhood - it's enough of a city neighborhood that Animal Control would be quick to scoop the dog up and take it away. But there are a few that make me really nervous regardless - one bodily hurls himself at the fence repeatedly, bouncing off of it and barking like a madman until we're out of sight. If he EVER got loose, we'd be in trouble, I'm sure of it.

Thankfully we live in an area where most pet owners have a fence... but we have been approached by loose dogs, thankfully never aggressive. I'm not sure how Corbin would react if an aggressive dog ran up to us. I always carry a bottle of SprayShield -it's a spray can that is 99% water and 1%citrus. Not harmful, but it will deter an aggressive dog from coming at you.
-Corbin's momma Jenn

Great job, Brut! I know how big of a challenge it is to pass by charging, reactive dogs and not react back. Woot!! We're almost there with Maggie. She's not completely calm but about 80% of the time, I can get her past without a bark or lunge.

Just stoppin' by to see how your week is going. Hope it's great! Wishin' y'all a great first summer day and a wonderful summer!

We have a five foot wrought iron fence. Mom says we could not be trusted not to challenge an invisible fence. We know it works for some dogs, but it also doesn't protect those dogs from outsiders coming in. And yes, it can be quite the challenge to walk by loose dogs. You just never know when one will break through that fence.

We've had some encounters with loose strays and once Hades snapped at a beagle who was walking off leash with its owner (I was horrified and embarrassed but their dog rushed him and I understood why it happened,) but where we live everyone not only has fenced in yards, but large concrete walled in yards. I can't imagine living where I grew up with dogs (no one has a fence.)

I've never understood why people let dogs roam loose. There are just so many things that can go wrong. I'm not a fan of electronic fencing, but it's good that the dogs respect it. Fortunately for us, we don't have many loose dogs that bother us on walks. If we run across a loose dog, we look to see if things are alright, it's that unusual here. The joys of a little town, I guess!

I've never understood why people let dogs roam loose. There are just so many things that can go wrong. I'm not a fan of electronic fencing, but it's good that the dogs respect it. Fortunately for us, we don't have many loose dogs that bother us on walks. If we run across a loose dog, we look to see if things are alright, it's that unusual here. The joys of a little town, I guess!

We have a high block wall surrounding our property so the pups can explore and play in the yard without fear or distraction (except from the stupid cat across the street that just doesn't get it). On walks, heck Steve tenses up when dogs come charging and YoYoMa our most typical male reacts just like Brut. And Steve love when the owner strolls over and yells over the mayhem, "Oh, he is friendly!"

Most important things first--Way to go Brut! You should be very proud.

I doubt that fence or no fence is the biggest problem. A dog whose person doesn't spend any time with him is going to be a nuisance whether he roams free or is behind a fence.

I'm not advocating free roaming dogs but a dog who is well socialized and mannered, outside a fence would probably cause you far less problems than a rude dog behind a fence.

I'm sorry you have the frustration of dealing with this. But I'm so pleased that you're seeing such great progress despite the challenges. It just shows how much your bond is growing with your dogs.

Sounds like Brut is making amazing progress! I don't think electric fences are so great either, and luck those dogs are heeding them for now. I live in the burbs so don't encounter loose dogs too often....dogs behind fences are stressful enough for my crew, so we "whistle past the graveyard" with lots of treats, freely bestowed!

Yap loose doggies not good. Guess some peeps missed the memo that ALL us doggies are protective to some degree. Come by my property and I'm gonna make sure you know where the line is. Well I'll bark my message from my Mr. Kravitz window that is ;) Mom carries an air horn on our walkies for situations where the peeps don't keep their dogs on leash in their front yard. I don't much care for it butt it does the trick. She tries hand signals and voice commands to get them to stay back first butt if that doesn't work, out comes the horn. Hasn't failed yet :)