Today stars are Luigi and Mojo.  Eleven years ago, we picked up our first two baby ducks at the local feed store when they were about 7 weeks old.  They were little pooping machines made of fluffy feathers and they grew like weeds.  You could literally see them change day by day.  One of these days I'll have my husband explain how he convinced me that we needed duckies in our entourage of pets. :)

Here is Luigi and Mojo two days after bringing them home. 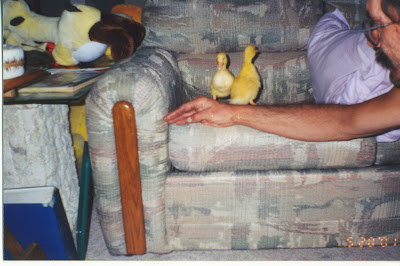 We weren't around very much during this time period and they bonded tight with each other instead of us. 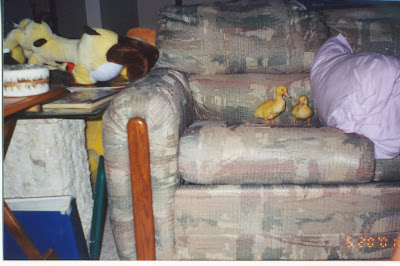 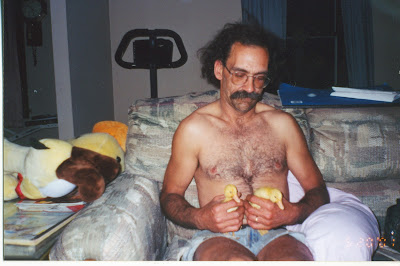 This is about 8 weeks old making a mess in the bathtub. 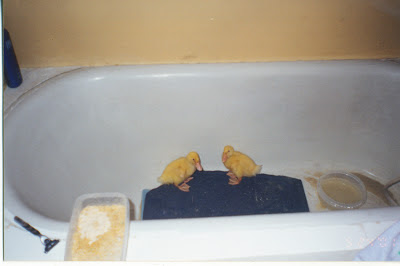 At about 9 weeks they hit that ugly duckling stage as there feathers started to come in.
You can see this especially on their tails. 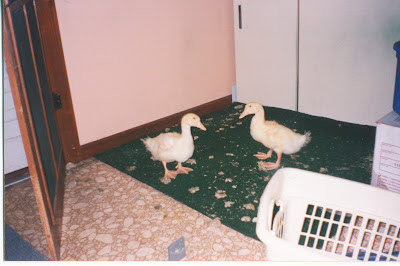 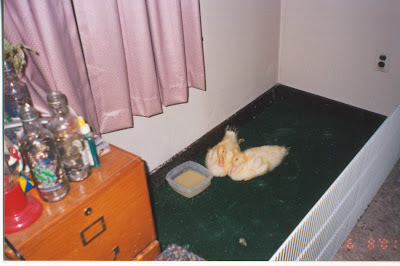 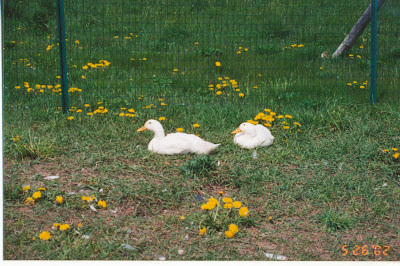 Here they are just over a year old.  Luigi on the left, Mojo on the right.  It would be a year later that we found Mojo killed by a predator and Luigi walking in circles around her.
If you have never seen ducks while they are courting, thank your lucky stars.  They are quite violent in their ritual, so much I felt like I was watching a domestic abuse case.
So while I was sad for Mojo's demise, there was a sense of relief as well.
Still it was difficult seeing one duck and Luigi seemed pretty lost for a while, but once he realized he was still king of the roost, he eventually came around.
Now he's the magistrate between the two packs of dogs and lives the life of King Duck.
Not bad for a little baby ducky.
Posted by 24 Paws of Love at June 11, 2012
Email ThisBlogThis!Share to TwitterShare to FacebookShare to Pinterest
Labels: duck

Not bad for a little baby ducky indeed! Have a Happy Monday!
Best wishes Molly

We loved reading about Luigi and Mojo. Poor Mojo! Glad Luigi gets along with the dogs.

What a great story. Poor Mojo but I'm glad that Luigi is King! :)

What a lovely memory! Saddened by Mojo's short life, but happy that Luigi adapted and has gone on to thrive.

Wow, I didn't know ducks lived that long ... when given the chance! Great the Luigi is still with you.

I loved reading about your ducks, but sorry you lost one. When I was a kid I always thought it would be fun to have ducks in my little plastic kiddie pool.

Cool! I want one or two of those! They look so cute. (oops, mom just said I would drive them crazy chasing them all day)

Your King Duck is a lucky Duck!

Neat! I bet Luigi is the king of the roost.

You just let us know when the time is right...no need to plan too far ahead...when the vibes are good, let us know and we will have that phone visit...offer still stands...and we are excited by the prospect!

Training your dog to use the PetLawn is much like teaching it any kind of trick. It takes repetition and positive reinforcement for the dog to learn. It is true that puppies learn more quickly than older dogs, but the popular adage that "you can't teach an old dog new tricks" certainly doesn't hold up here. Older dogs just require a bit more repetition and patience to learn.
pet potty
dog potty
puppy potty
dog toilet