I have often discussed my difficulties with Brut and all his transgression.  Name a bad behavior and he has it.  It has been a difficult struggle for me, but it has also been so for Brut.  For as much as I have had to put up with him, he has had to put with me as well.  I'm not talking about my lack of knowledge and ignorance about his aggressive nature, but with my disdain that has come from it.  There are more ways than I can count that I've had the thought of wanting to get rid of him.  I haven't always been so forgiving and kind to him.  A vicious dog fight I witnessed as a child triggered what I thought was a killer in Brut.  Every time Brut attacked one of the other dogs, I was gripped in fear that his actions were malicious and I learned to hate that part of him.  I could not separate what I saw between those fighting dogs who happened to both be Chow Chows and Brut whom I discovered was also part Chow.   What would be the odds?

Yet as much as that hatred and fear hardened my heart, my love for Brut ran a deep parallel to it and I found myself always teetering on that fine line.  I struggled to love this portrayed monster and the Jekyll and Hyde he displayed between the two entities where I found myself constantly flipping with obvious division between the 'killer' Chow in him and the loving Husky.  I've done my share of emotional damage to him as these two dimensions split my love for him.  So while it hasn't been easy on me, it hasn't been easy for Brut either.

So many times I didn't know what to do when he would go after another dog and felt like I was drowning in a sea of hopelessness. If it wasn't for the bond we form the first day I chose him, I don't know what would have happened.  Spurred along with words from the breeder who said he gave us Brut because he knew we would keep him forever.  Never mind that this breeder was part of the cause for the damage done to Brut as a very young pup, they were words I couldn't ignore.  Words I clung to at those moments when I was ready to give in.  Words that made a difference and kept my thoughts about getting rid of Brut, just that, thoughts.

And Brut knew it.  He knew how I felt because I couldn't hide it from him.  Thoughts or not, they were real.  My frustration, anger and disappointed flowed through me like a river and gushed all over Brut.  But then so did my love for him.  Eventually time and understanding began a healing for both us and brought us closer than ever. The love kept winning as our frayed ends began to mend.  Respect replaced the hate and I began to understand the nature of the beast within both Brut and myself.  Two very damaged souls that found the power to heal one another with a bond that will never die.  Call him my heart dog, my canine soul mate, or my spiritual twin, no other dog could have done what he did for me.  And no other human could have done what I did for him.  A true measure of love that has only grown and matured as the years pass.  How to stick it out through the best and worse of a relationship and the honesty of those ugly feelings that kept bringing us back to each other. 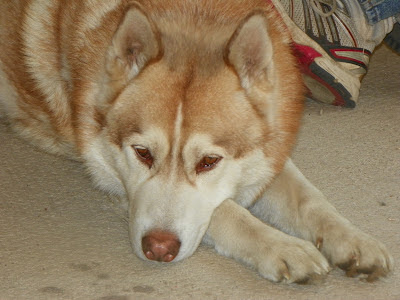 Who would have thought the most troublesome dog could save this traumatized heart and teach me the Brut honesty of true love?
Posted by 24 Paws of Love at July 11, 2012
Email ThisBlogThis!Share to TwitterShare to FacebookShare to Pinterest
Labels: dogs, fights, healing, honesty

Dogs are nothing if not honest. It's one of those lessons we stand to learn from them, time and time again. I'm so glad that you've shared this story of Brut with us!

And perhaps that is the definition of true love... either way it's easier to come by with dogs than humans!

I am quite enthralled by your relationship with Brut. It's a love hate relationship that grew into a companionship and respect one. It's like finding the compatible pair.

Brut looks lovely. Your frustration just shows how much determination and patience you've poured into your heart dog.

In the end you find the true each other, instead of finding who you think the other is! Have a good day.
Best wishes Molly

Dogs are known to be an honest animal..
Have a Good Day

While your experiences with Brut are uniquely yours & Brut's, I think we all share some aspect of that type of relationship.. I know I'm most bonded with the two of my 3 dogs who are most responsible for my growth, both as a dog guardian & person. And that growth comes from overcoming obstacles & changing mindsets.

You are amazing because you let your experiences with your dogs teach you things about yourself, too. Not everyone does that

Wow what a wonderful post...so honest, real, and inspiring. Really resonates with me too, because my beloved old Tashi, RIP, was part chow too and when she used to go after other dogs I had many unkind thoughts about her during those difficult times. Like Brut though she was totally worth it in the end. Glad you two ended up with each other, Brut sounds like a priceless companion.

Thank you so much for sharing some of the harder aspects of dog ownership. People really do need to be aware that it is not all good times and tail wags. Dogs are challenging creatures, some more than others. Brut is a special dog who requires a lot of time and understanding, and even then he tries your patience. But in my limited experience, I find the ones who are harder to live with can also be the ones who give you the most joy.

There's nothing better or harder sometimes, than true love!

Witnessing a dog fight is a terribly frightening thing.

I'm reading a book now about fear. And it states that there is no way to end fear except by confronting and moving through it. That's probably true for other "negative" emotions as well.

You and Brut have been through a lot together. And you're now seeing the fruits of both of you working through things together.

You said it with such soul and genuineness...and that honesty is the foundation of any successful relationship. Commitment and love make anything possible! Thanks for this post.

Dogs are one of the best companion and good buddy :D thank you for sharing this post very inspiring :D

Such an inspiring story you two have! The thought of getting rid of Portia once crossed my mind, because I didn't quite know what a handful huskies can be. But the moment I looked at her after having that thought, I just started crying immediately. There's no way we could do without our pooches!