(Warning: this first story may be a little gruesome.  Especially if you just ate)
Saturday night Brut came up to the door with a rabbit in his mouth.  I will spare you the gory details, but lets just say he was in the process of having a midnight snack.  I think he wanted to bring it in so he could hide the rest in his crate for later.  The next morning I awoke to find a mound of furry bunny parts.  As you can imagine it started my morning off great.  Gagging and choking.  It was the first time he's ever ate one and I'm sure he learned his lesson and won't ever do it again.  Yeah, right!  Gotta love dogs!

In lighter news, Brut had his first positive experience with a loose dog while we were out walking.  While we were a couple houses away from the dog, I stopped and made him sit.  And he actually did it.  Then we talked for a little bit while he kept sitting until the dog was called in.  And that was when he lost it and tried to run after the little dog.  Thank goodness for leashes.  Every single time Brut runs into a loose dog, they always run up into his face.  So this was pretty cool. 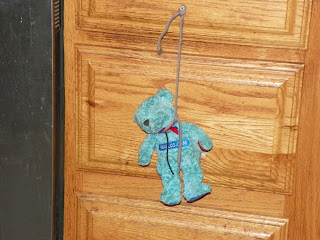 Service dogs must go through some hard training.  I figured that since Chance is always under foot or next to the stove trying to help keep my floors clean that maybe he could assist me in another way.  So I attached a string with a knot at the end to my silverware drawer.  It's a lot tougher than I thought it would be to try and train them.  (Blaze wanted to learn as well)  They wouldn't pull the string.  So I clicked and reward for grabbing it.  Then I tied cheese in the knot thinking they would try to run away with the cheese and instead they ended up licking it.  Eh, try again.  So then I used this poor bear on what is the worse day of his life to prompt the dogs to grab and pull him.  Chance was totally clueless, but Blaze wanted to save the bear and would pull the drawer open a little bit.  Still going to take some work though.  Anyone have any ideas?

That's our weekend wrap up.  How was yours?

Posted by 24 Paws of Love at September 24, 2012
Email ThisBlogThis!Share to TwitterShare to FacebookShare to Pinterest

I am always so worried about loose dogs. Sam will mind, but Monty wants to go to them - I'm not sure what he has in mind when he gets to the dog though!

Hello **waves paw** I found you on the Pet Bloggers Hop and have started to follow your pawsome blog.

Keep up the good work with Blaze about opening the drawer it takes time but you will succeed.

Lots of excitement in your house, huh?

I'll never forget when my dog Christie killed a baby raccoon on our porch. I didn't think my husband would ever forgive her. He seems to forget that dogs are dogs.

Brut's attentiveness to you in the presence of an off leash dog is awesome!

You got me curious about teaching how to open a drawer. I figured it would start with teaching to tug on cue. I think the bear is a good start. Here's a training video I found: http://www.youtube.com/watch?v=5EqALzQpQEk. If you don't use a clicker, using the word "yes" instead of a click should work.

Will we be seeing some video of this soon?

Ugh! Just say no to dead animals in the house is my motto! lol

For training the handle pull, I believe you use a wide strip of durable cloth, like those Wubbas are made of. You also want it to be a bit long, and I'd try having them open an empty drawer first. It won't make any alarming sounds that way and it will be lighter, so it's easier to pull open. Before you attach the tug rope to the drawer, though, I'd do a lot of work with it off the drawer. We have a good friend who trained service dogs for almost twenty years. He says that you break things down into very small steps.

Eck on the bunny parts!

Glad to hear that Brut had a good experience with the loose dog!

At least he didn't leave it as a gift on your pillow! Sounds like GREAT progress has been made in staying calm around unrestrained pups...that is no easy accomplishment. It took about 8 weeks to fully train Siku how to open drawers and doors (be careful what you unleash)! First reward for just a solid touch on the bear. Then When that is 100% up the ante to "Take it" where they must put knot or toy in their mouths before getting reward. Then "Take It and Back Up" until drawer opens. This takes work as Siku would stop when she met resistance but we did back up-back up-back up-stop and that seemed to make more sense to her. Also something bigger on the end would be better for them to grip than just a knot.

Interesting..I can't wait to hear how it goes! (The drawer pull training, not the after effects of the midnight snack hehe)

That's a great improvement Brut - what a good boy!

Message for Brut's Mom - watch out as that bunny rabbit may have given Brut worms. I recommend worming him! I have a friend in the USA that's dog catches and eats wabbits and they need wormed afterwards!