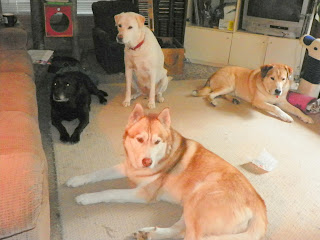 Brut is not a natural pack dog or born leader, due to his upbringing before we got him.  There were times in the heat of his aggression that I would think he would have been better off being an only dog.  He was designed to be lone dog.  I didn't think he'd ever be able to handle being a pack dog, let alone become such a great leader.  For a while I felt guilty putting him in such a position with Zappa and Fiona, not to mention the Front Dogs coming back.  The stress of so many things changing so fast was overwhelming for all of us, but with Brut's demeanor it turned him inside out and exasperated his own issues.

Dogs were his biggest threat to him and Brut lashed out like a caged animal..  And I wondered more than once if we had pushed his limit.

Then there would be those tiny miracles, some loving affection or playtime that would pass between Brut and another dog and all was not lost.  And I could feel that rusty wheel starting to turn in the other direction.  And I had hope.  If I hadn't seen this miracle with my own eyes, I might not have believed it because it always seemed like it the next breath it would all be crushed and we would be back to square one.  But each time the renewal kept getting stronger.  He was learning to live and enjoy his pack mates.  He just never know how to do it before.

That's when we witnessed this thrashing, out of control dog, grow into becoming the competent and secure pack leader who is calm, and thriving among his pack.  And just needed some help along the way.  Of course there will always be some flare ups, Brut will always be Brut.  But a saying a heard a long time ago keeps carrying me through: 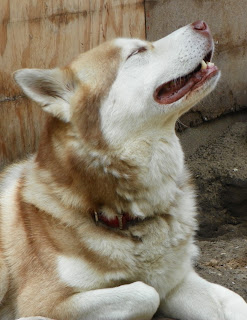 Don't give up before the miracle happens.
Posted by 24 Paws of Love at October 08, 2012
Email ThisBlogThis!Share to TwitterShare to FacebookShare to Pinterest

We are so very happy that your dogs have all found a home with you! They all seem very happy!! xoxo Chloe and LadyBug

How nice! Have a lovely Monday.
Best wishes Molly

We are glad things are changing for the better - with all animals, some times it just takes a little time.

He looks like such a sweet, intelligent boy. I'm glad he came around and adjusted to life with canine siblings! :)

Brut just needed the trust and love to find himself. That is one of momma's favorite sayings...that and that each of us in the White Dog Army is a precious miracle. We suspect that you feel the same about your pack.

Brut is such a special boy, the Brat of your pack like my Kodiak lol:) I love that photo of him smiling with his nose up in the air - like royalty! I just want to pluck those fur tufts lol:)

Oh Brut, we are glad at how you turned out to be. We hope that you'll get better and stabler in the long run.