My husband had just run for a bottle.  Silver was giving birth standing up and my husband had caught the first two and had so far done most of the work.  Silver began contracting and pushing again, I yelled for hubby, but it was too late she dropped a goo covered black furball in my hands.  Now I was going solo.  I pulled off the sac, tied and cut the chord and rub this little black jewel until she made her first cry.  I continued to dry her off while Silver finally settle down in the whelping box. 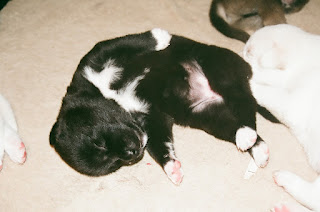 Our first black puppy and our first girl.  There was no doubt I was keeping her after she was born in my hands.  After the white wingspan on her chest we gave her the name Angel.

After witnessing Fiona, the only white female and the runt of the litter, I was torn as I watched Fiona fight with profound determination to keep up with her brothers and sisters.  I don't know what it was about this little girl, but she had my attention.  Zappa was a given, now Fiona, do I keep Angel as well? 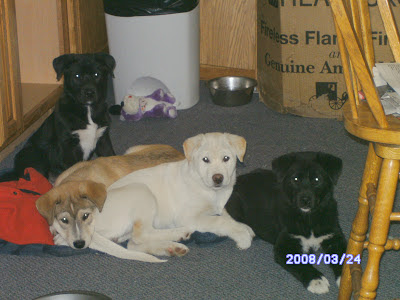 (l to r) V-girl, Zappa, Fiona and Angel
Angel was a natural Husky escape artist and was the first and only one to get out of the whelping bed as well as back in.  She always used the papers I had on the floor and there was more than one time she climbed up on the bed and I woke up to her furry face in front of me.  She was smart and witty and cute as a button.  And I wanted her so bad, but I didn't think 3 puppies would be a good idea.

We were down to two puppies that needed homes, both black and white dogs, when my friend called looking for a puppy, I knew exactly which one...Angel.

I think I'd known for some time Angel wasn't meant to be with us, it was just so hard to let go. 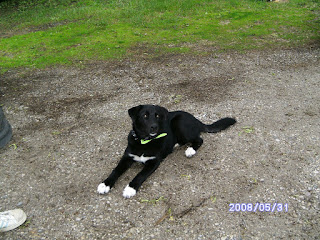 She lived a wonderful life, hunting, going to her family's cabin, learning to dog sled and she had a home full of love.

Tuesday night, the night she was found, I held her in my hands and remembered that first day she touched them.

And as she was buried, I was so grateful she was home surrounded by the love of two families who loved her. 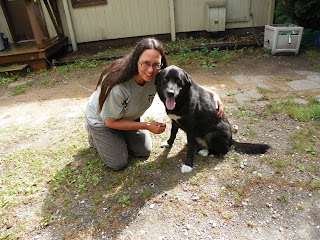 Thank you so much for this blogging community and all of your help, support and condolences.  We thank you all so kindly from the bottom of our hearts as we grieve the loss of our Angel.  May an Angel be smiling down on all of you today.

I'm really sorry for your loss! I think Angel lived a charmed life, they're just never with us long enough!

And may your families always know with certainty that you are cradled in the Paws of a very special angel. The White Dog Army sends comfort and love.

I'm so sorry about Angel :( Thank you for telling this story.

We were so sad and felt so helpless. We feel for you all. Take care and lovely tribute.
Best wishes Molly

I'm so very sorry to hear the news about Angel. I guess there was a very special job at the Bridge that only Angel could do so she was called home to do it. Her memory will live on in the hearts of everyone who loved her.

What a beautiful story! Angel was a sweetheart. I am so sad.. what a special dog. My thoughts and prayers are with you.

Now I'm crying. I'm glad you got to say your goodbyes, it is better to know then to never know. Sending you hugs and love.

I am so sad that Angel had to leave but she knew the best love ever. I know one day your hearts will smile when you think of the love she gave back. Hugs from all of us.

Thank you for sharing your touching memories of Angel with us. We're all better for knowing of her.

Blessings to you and her adoptive family who love her so much.

Oh no, I am so sorry to read such sad news, run free, Angel xxxx

What a wonderful story of Angel you've shared. I'm so sorry for your loss.

We are so very sorry for your loss. Rest in Peace Angel. We know how much you loved her. And we're sure she knew that too.
xoxo Chloe and LadyBug

A wonderful life she had indeed. Run free Angel! We will be thinking of you playing with the wonderful furiends that have also crossed the Rainbow Bridge.

Ur dog friend was so cute. :) Yay for good memories.