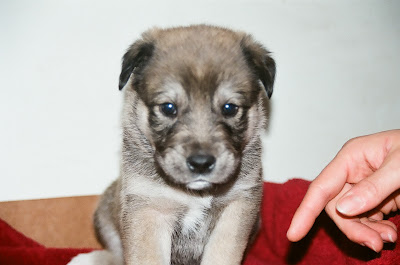 Look at that "Grumpy" face!

A year ago on this date we got a call from a girl who owns one of our puppies to tell us Grumpy was in her care.  She wanted to give him back to us, as he had been "surrender" by both his owners.  Grumpy was the 6th born in Brut and Silver's litter.  This was the post I had written that day after the call.


Every night when I watch the news,  I am always keep an ear open for our “lost” puppies.  The ones we lost contact with after the first year.  The new owners were young and have went out of their ways to avoid us.  Even with a signed contract.  Every so often I check out the local Humane Society by chance that they may have ended up there. 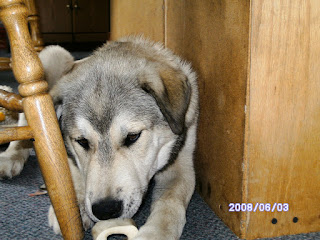 One puppy that we called Grumpy we haven’t seen since he was 6 months old.  We have pick up pieces of info through the last four years and heard how he has been shuffled from place to place.  We were always just out of reach of being able to connect with him.

We got a call today from a girl who has one of our pups to tell me that Grumpy was in her care.  The original owner had ditch him, the girlfriend couldn't keep him and was ready to take Grumpy to the pound.  That’s when this girl called us.  For now Grumpy is in her care and is doing OK.  We are going to see him tomorrow and figure out what to do.

I've been in tears of relief and sorrow.  We have never given up on seeing him again, but not under these circumstances.

I've made many mistakes with this entire breeding thing, one of the biggest was not understanding socializing.  You can label me anything you want, but one thing I always done long before conception was love every single one of those ten puppies.  And with love comes a responsibility that I never took lightly or for granted.  And even though I messed up, I have never questioned or backed out of my responsibility to every puppy in that litter.  And while because of my screw ups, we are in a position that is difficult to say the least and I don’t know exactly what we are going to do, but Grumpy is not going to the pound.

So I’m asking for your prayers and the power of the paw to helps us find Grumpy a good home.  Whether it be with us or some wonderful person who will love him forever. 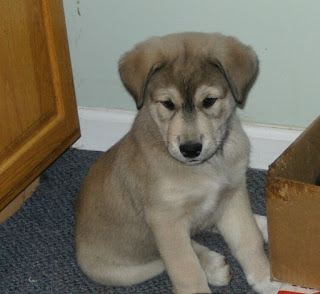 We went to see him the next day, not at the girl's house as originally planned, but at the owner's house. 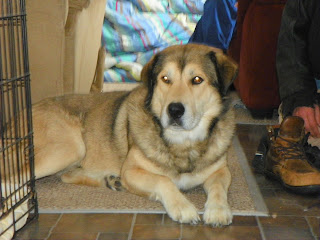 It took some time for him to remember us.  Slowly the pieces were coming together for him.  Touching Grumpy was like something out of dream.  My heart wanted to squeeze him in a big hug, but my hand just barely stroked his fur.  Three and a half years of never knowing, not seeing, I was afraid to breathe.

At one point we were sitting on the floor together, Grumpy and I, as I lightly petted his back, he turned and gave me a kiss and our eyes met.  I just melted.  My Grumpy was OK. 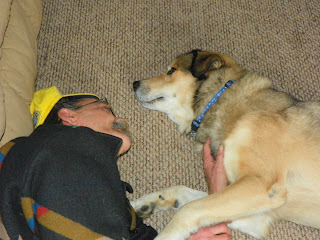 My husband just laid on the floor with him as they gazed into each other's eyes.

During our talk with the owner, we found out he had been shot within an inch of his life the previous fall.  Literally.  The bullet went in an inch from his heart and came out an inch from his jugular.  He was being watched over or we would have never seen him and the beautiful dog he became.

We made plans to pick him up that Saturday.

I was falling apart every which way when we left.  We were both so elated to just see him.  Now came the tough part of bringing him home.  We had some things to do before that which is why we planned on Saturday.

Saturday came and the entire town was shut down due to a freak snowstorm.  A couple feet under heavy, wet snow.  We were without power.  Everything was closed.  Something I've never heard or seen of and we have had our share of heavy storms.  Mother Nature was giving us a sign, we just didn't know what is was yet. 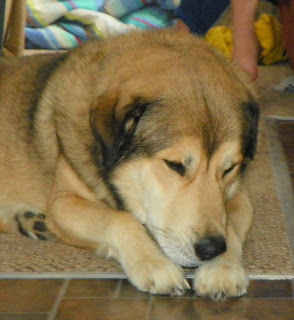 My heart was broken and relieved.  We still had some time to prepare.  We would find a way, some way any way to make this work.  We called.  Left messages.  Sent texts.  No answer.  No response.  Nothing.  With no contact, we didn't chance stopping at the house.  Everything was up in the air and left there until October of last year when we made a stop to talk to the girl who called us in the first place.  After Angel died we wanted to get in touch with the other puppies just to touch base.  That's when she told us that the owner had Grumpy put down.

And just like that it was all over. Grumpy was gone.  Our sweet little boy was gone...

He did father two litters, so there are little Grumpys out there somewhere, but the boy we knew as Grumpy was still gone.

We are both so grateful that  we were able to see him that one time and for what ever happened in the cosmos to make it happen, we did get to see our beautiful boy as an adult before he was called home.  And nothing can take that connection away.  It is treasured deep in our hearts for the love of a puppy named Grumpy. 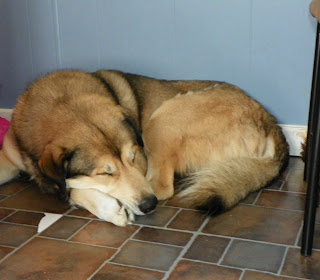 Rest in Peace my Sweet Grumpy

Posted by 24 Paws of Love at March 01, 2013
Email ThisBlogThis!Share to TwitterShare to FacebookShare to Pinterest

That is so sad. I don't know what to say but rest assured our heart goes out to you. Just so sad.
Best wishes Molly

My heart breaks for both you and Grumpy. What a sad, sad story.

You have been so honest in sharing the awesome responsibility that comes with breeding a litter. Thank you for sharing your stories.

I gasped when I heard that Grumpy had been put down. So sorry. What a beautiful boy he was.

Oh that is so sad...what a beautiful boy...I was so hoping for a wonderful ending, but sometimes in life, that just doesn't happen. Things that are out of our control. I am so glad you got to see him - such a beautiful face and now he is among so many other wonderful furangels beyond the Rainbow Bridge. Rest in peace, (anything but) Grumpy.