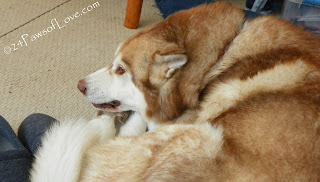 Being an amateur with an aggressive dog I have had to work backwards from an attack to understand the signs and body language that lead to Brut strike.

First it started with stopping or breaking up a fight.

Then stopping when he was in attack stance.

Then stopping him when his head was low and ear were back.

Then stopping him when he snarled.

Now we're at the point of stopping him when he even thinks about going after another dog.  And yesterday was a great example.

I was bringing the treat bag out to play in the pool with the four Back dogs.  I was barely out of the door with Brut right in front of me and Zappa to my left.  Having the treat bag is an adrenaline rush for Brut, who originally thought he was going for a walk, which made it a double whammy for Brut.  I was prepared for it and as soon as Brut turned his head (still even at this point) towards Zappa I gave a quick, "uh-eh."  Brut turned to me, turned back to Zappa, I said it again, and this time he gave me eye contact and any thoughts blew over.

It was really quite awesome!  I actually couldn't believe Brut responded so quickly.  Usually I am too late and his head will be low and next thing I know he's in the attack zone.  Or I would call his name in a sharp voice and that would lead to an attack as well.  Instead I was very cool and calm and very unafraid.  I have made many, many mistakes being in fear.  We have both come so very far in a relatively short time for doing it by ourselves.

None of the dogs would come by the pool with Brut even though he was lying down and listening.  They probably sensed what he was going to do long before I caught on.  So Brut had the pool all to himself and got to bob for treats.  And you know what?  That was OK by me, because he deserved it! 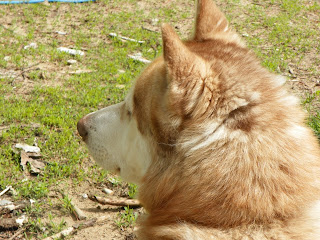