I'd been angry on and off for a couple of days.  Irritable, depressed, and moody.  It wasn't one thing, it was a little bit of everything.  It seemed like every word that came out of my mouth would start a fight between hubby and me that I couldn't seem to control.

We were sitting out with the Back Dog, our time to relax and catch up when one word lead to another.  And BAM another fight arose.  In the midst of our words flying back and forth, Brut came to where I sat and stared at me with those deep caramel eyes with understanding and a plea.  He came close to let me pet him, never taking his eyes off of me, slowing soothing my ruffled fur.  He stayed there for a while, letting me stroke his thick mane as the reality of my actions sunk in.  Don't act like me, he seemed to whisper.  It hurts too much.

I finally backed down from the fight and hubby and I were able to talk.  I thanked Brut several times.

Later in the evening during my 'me time,' Brut and I looked long and deep in each others eyes with an understanding of knowing when to rescue each other.  I think he enjoyed being on the other end of the stick and being the savior this time. :) 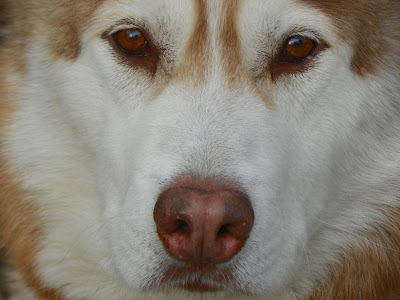 
Posted by 24 Paws of Love at July 25, 2013
Email ThisBlogThis!Share to TwitterShare to FacebookShare to Pinterest
Labels: anger management, changing a bad day with dogs, communicate, connection