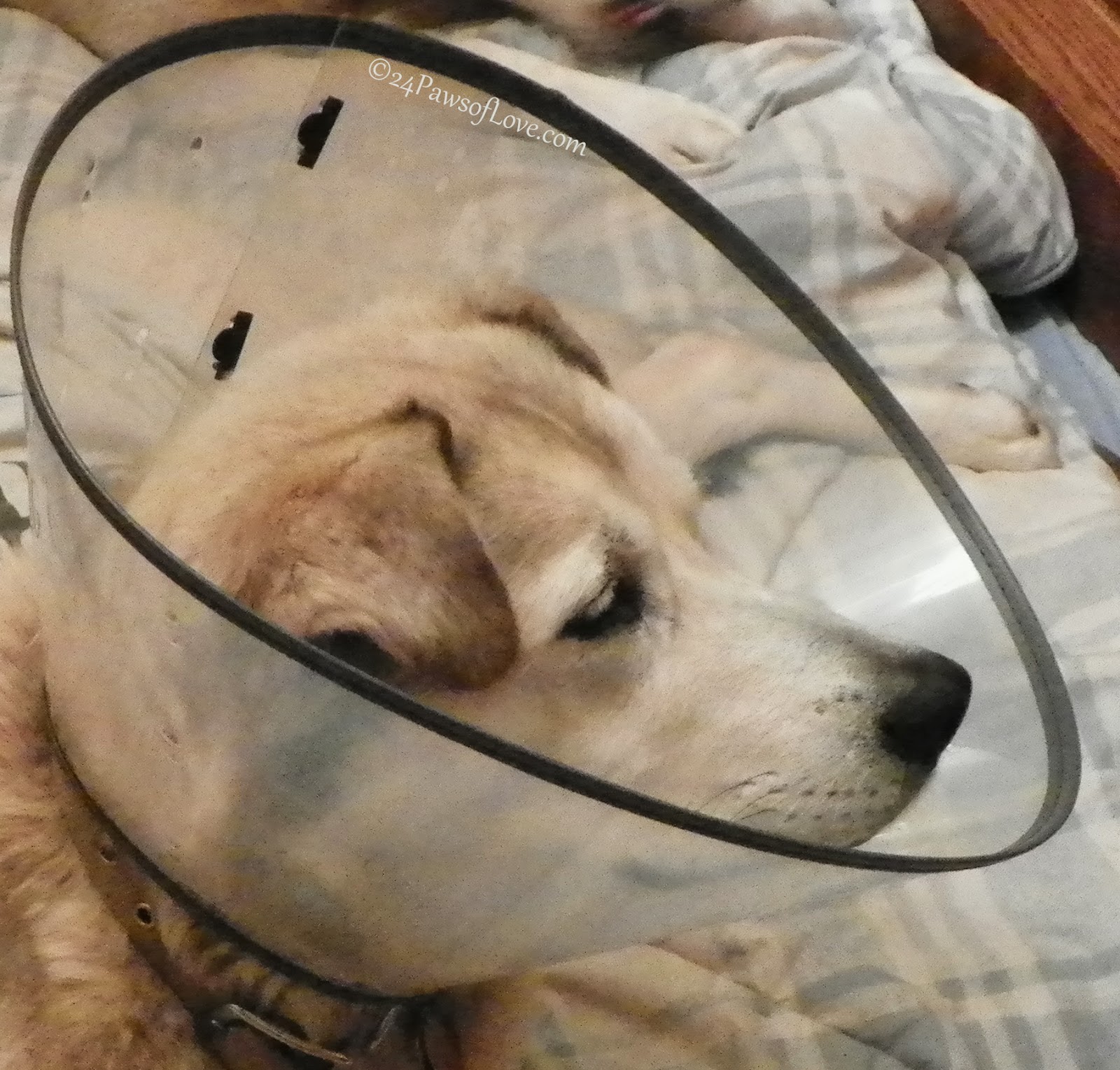 Friends, it has been one of those days here at the 24 Paws of Love.  As you know Blaze was spayed  10 days ago and should be healed by all rights, yet I ended up having to take her into the vet, again, where they staple the middle part of the incision that was still open thanks to Blaze licking it when her silly Mom thought she needed a break from the cone and took it off for 10 minutes.  Talk about mom of shame.

See the incision had opened up last Saturday and I was able to get it to close with a large band aid.  It didn't take long to seal and I sprayed some Liquid Band-Aid on it and it was working right up unto yesterday when I left her un-coned.  It didn't take long after that and all my hard work went right out the window.  I tried everything I could think of to use to bandage it, because I was without a vehicle, but nothing would hold.  I had to take her to the vet.  Nothing was working.

So she got a couple of staples and the vet said that everything on the inside was healed, the sides of the incision were healed and it was just in the middle of the incision (the skin) that needed to close up.  So this was all good news.

My problem is that I've been beating myself up for all of this and a miscommunication that happened at the vet office that I didn't realize until I got home.  They were all under the impression that the incision had been open since Saturday and I was just now coming in on a Tuesday to take care of it.  Really?  Do they really think I would leave such a wound open like that and then finally take care of it 4 days later?  Well they did.  And since I'd already been beating myself and shaming myself most of the day, I didn't even understand what they thought I did.  I just wanted to get my Blazer fixed and all better.

Have you ever felt ashamed or guilty for something that happen to your pet and had trouble communicating with your vet?

Posted by 24 Paws of Love at May 14, 2014
Email ThisBlogThis!Share to TwitterShare to FacebookShare to Pinterest

No not for us but don't worry about it. We are sure 'lost in translation' happens all the time with vets. Have a wonderful Wednesday.
Best wishes Molly

Naughty girl. Fortunately I have a pretty good relationship with my vet.

It's unfortunate that your vet got the wrong impression, but it happens. You did the right thing and Blaze is now fine. That's all that counts.