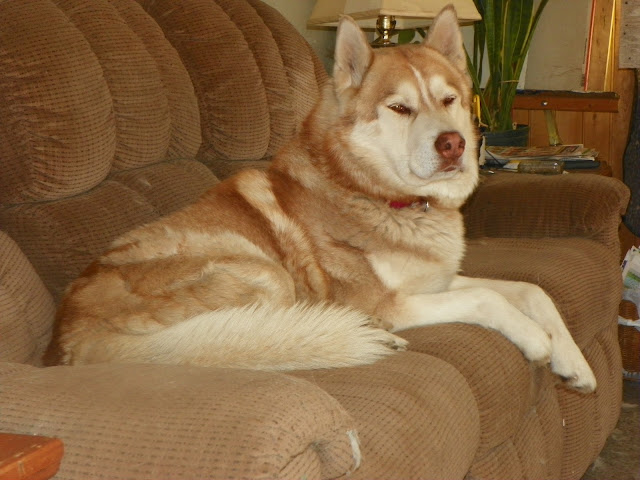 It was a week ago Sunday we were taking Brut on a 3.5 hour drive to an Animal ER clinic and not knowing if we were coming back with him.  It was a horrifying day.  His blood pressure had dropped significanlly and that was all we could figure out at the time.  When we finally arrived at the clinic, they took Brut inside to stablize him and that's when we discovered he was bleeding in his abdomen and more than likely had a large mass on his spleen.

The vet wanted to operate.  We couldn't afford the cost of surgery.  We were ushered to fill out a Credit Care form for acceptance.  We were denied.  The other option the vet tech said was to put him down.  That's when I said, we'll take him home.  If I had to put him to sleep he was going to be with our vet at home.

We made it home after midnight that night and there were already improvements from Brut on just the ride home.  He was standing up every so often to look out the window, was drinking water on his own (I'd been hand feeding him the day before) and was keeping his head up while laying down.  We didn't know what this all meant, but I'm so glad we didn't euthanize him!

Our vet got a copy of the reports from ER vet and seemed to conclude the same results.  High blood pressure and a mass on the spleen.

Brut continued to improve every day as he gained his strength.  After a week he was finally able to go on a short walk.  Then the other day I was able to take him on a short walk.  Which would have been my biggest regret is he had died earlier.  It all felt so complete.

His eye has improved and he hasn't had to take the drops anymore, but we noticed his third eye lid kept sliding up in the early evening, when it was fine the rest of the day.  I called the eye specialist and without seeing Brut they could only guess.  That also happened to be the day we started him back on his high blood pressure medicine.  Three days later the eyelid is back to normal and we have a calmer Brut.  We are looking into a blood pressure monitor so we can keep an eye on blood pressure.
How is it that Brut improved over the last week when he could barely stand?  Our vet told us that when Brut was bleeding internally the tear more than likely in the mass clotted up and he began to recover.  His blood count earlier that week had been 32 which was on the low end and when we got to the ER clinic it was 16.  A tear could happen again, this one happened when Brut vomitted quite violently and we don't know if it will heal again this time.  He could have days, weeks, or months to live.

All I know is that I'm so grateful we didn't head the advice of that vet tech!  My Brut is still here!
Posted by 24 Paws of Love at May 11, 2015
Email ThisBlogThis!Share to TwitterShare to FacebookShare to Pinterest
Labels: bleeding in dog abdomen, bleeding internally, dog eye specialist, dog high blood pressure, ER Vet, ER vet clinic, mass on dog spleen

I am glad he has recovered after feeling so bad. I hope there won't be any more bad episodes.
I'm sorry we can't help much right now, but I'm spreading the word about your fundraiser, hopefully you will get enough money for the surgery.

Thank you so much Lavi. We appreciate your support and good thoughts!

Oh, I'm so sorry to hear what you've been going through while I was preoccupied with other things. But I'm so glad that Brut is showing some improvement so you can enjoy every moment together.

Thanks Pamela. We are spending every minute we can. :)

ALWAYS ALWAYS ALWAYS listen to your instincts and ask Brut. Vets and Drs. are there to guide, they have no invincible knowledge. Every minute is precious...but then it always is because we just never know. With Brut or any of those we love. You will know when the time is right to do something different if that time comes. Oso wanted to leave this world naturally and I suspect our 17 yo Puff will make the same choice. Quinn reached a point where he could no longer stand the torment of constant seizures...he told me clearly he wanted release. Yo made the right choice and we send our strongest White Dog energies for strength, dignity, peace and love for your noble boy.

Thank you Siku Marie, I needed those extra words of confidence. Brut just started going down hill again and your timing is impecable. :)

Thanks for the update! I think about Brut a lot and hope he is doing and feeling OK.

Hi - Just wanted to let you know that I requested a post about Brut on the on the Power of the Paw blog so people will know to send good thoughts and prayers for your special boy.

The website is blogvillepotp.blogspot.com. People are leaving nice messages for you there

Sending Prayers and Love with lots of Hugs for Burt and you.
Bentley

WE saw at the POTP blog that Brut needed some prayers. We have our pug paws crossed for him, that he continues to feel better
hugs
Mr Bailey, Hazel & Mabel

Someone mentioned a fundraiser. Is there a link? Mom would like to help. We do hope that sweet soul is feeling better soon. Abby the Lab

I have my paws crossed for Brut and I am sending love and hugs. POTP will help, it always does.

THANK YOU FOR FOR YOU THOUGHTS.HERE IS THE LINK http://www.youcaring.com/pet-expenses/help-daddy-dog-brut-get-the-help-that-he-needs/349901

We are thinking of you.

Thank you so much Angel Pip's mom. We cannot tell you how much we appreciate your support. :)

I left a small donation (money is tight now with my Dad needing a full time nurse at home (he refuses to move in with any of the family) but I tweeed the fundraiser as well. You are in our continued thoughts and prayers.

Thank you so much! A little from a lot meets our goal to get help Brut needs. Thank you again.

Thank you Christine. We appreciate your support.

Thank you for your paws, love and hugs Sasha.

Thank you for your crossed pug paws. We appreciate your help.

Thank you for your prayers and hugs. We need them.

Thank you so much for your luffs and hugs, Princess.

I was away from the internet for 2 wks and I just saw this. I am going to follow it forward but I am so glad that Brut came home with you.