Chance and Zappa had their first real meeting today.  I say 'real' because they have had a couple of close encounters when the door that separates the two packs wasn't closed all the way and they saw each other.  (no interaction)


Today was different.  I had just walked Zappa and when we got home I tied him to the mirror bracket on our old truck.  Then I went in to get Chance.  Unfortunately, Chance was all psyched up for a walk until he saw Zappa.

They barked at each other, but Chance did not pull or lunge as I walked him out of the gate and hooked him to the tree.  They had plenty of space between them, 10 or 15 feet and all they did was bark at each other.  Once they realized they couldn't get at each other, they stopped pulling on their leads.  Then I brought out the treats and then they really settled down.

After a couple sits with treats, it became rather obvious Zappa and Chance were 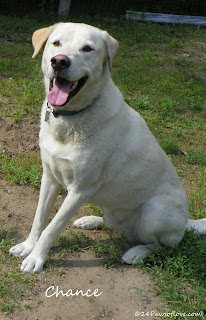 both very nervous and scared.  Zappa barked a nervous bark on and off.  And Chance slumped into a sit with his head hanging heavy, shaking ever so slightly.

That's when I took Chance inside and then took Zappa in.  That was a good start.
What's kind of funny is that when they confront each other in the house when the door opens by mistake, (this has only happened maybe 5 times ever) Chance and Zappa back up from each other and quiet down.  They seemed to be surprised by each other without a barrier, but also I think they may remember each other.  Call me crazy, but I think something registers inside of them as they grapple with that feeling.  Not mention actually have a face-to-face conversation!

And wouldn't you know it I went to record the whole thing with our GoPro, I turned it on and thought it was recording, only to find that it wasn't.  UGH!

At least it was a beginning.  I hope to have a few more meetings like this and see how they go.  Hubby and I are hoping to do some ground work this summer, so we'll see how it goes.  Wish us luck!

**For those of you who are new readers and are wondering why we have two packs of dogs, you can read about it HERE or click the tab The Two Packs under the header.**


Posted by 24 Paws of Love at March 21, 2016
Email ThisBlogThis!Share to TwitterShare to FacebookShare to Pinterest
Labels: blending of two dog packs, Chance, introducing dogs to other dogs, Zappa

Both pups are equally adorable, I'm glad their encounter went well. Thanks for the post.

Wow, how exciting. I hope you can move them forward to associating good things with each other. It's never fun to see our pups being scared.