We had a spring snow storm today in our area in which we got about 5 inches of heavy, wet snow.  The snow was a wonderful reminder of a happy memory of Brut that I would have forgotten about if it wasn't for the snowfall.  And so I'll share...

Brut was not a licker.  As a puppy he was, but once he grew up it phased out of him.  He probably thought that giving kisses was too macho for a dog like him.

Our house can get pretty warm, running a wood furnace, depending on the temperatures and the dogs and I would need to cool off, so we would go outside to play and lay in the snow.

Whenever I would lay in the snow, Brut would come bursting from wherever he was at, stand over me and begin licking my face.  I mean an all out face washing.  Over and over again.

And Brut meant business.  He's give my face the full scrub down, his face and eyes intent.  He took this job seriously.

There were very few times that I was in a submissive position with Brut, this was one of them.  Yet, I was treated as a Queen by him and given the Royal treatment.  What more could a girl ask for?

I don't know why laying in the snow tipped him into becoming a dog washer or why he felt the need to scour my face with his tongue, but it was the only time he did it.  It was such a cool feeling to have all that power loving me so intently.  Nothing like a Brut facial.

I missed that this past winter, but I'm glad I have the memories to keep alive whenever I need them.

Brut was such an awesome dog.  I really miss that boy. 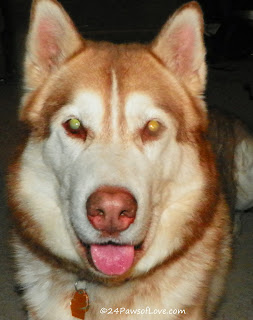 Posted by 24 Paws of Love at March 24, 2016
Email ThisBlogThis!Share to TwitterShare to FacebookShare to Pinterest
Labels: Brut, Brut Thursday

Amazing dogs like Brut live with us forever. I'm glad you have so many awesome memories of him to continue keeping you company.

What a wonderful memory...these are indeed what keeps them with us, every single day. <3

A handsome dude indeed, much respect from us here,