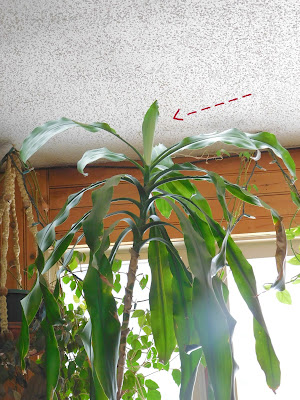 We were just going into beginning of spring when Brut got sick.  I was already a bit neglectful of my plants, taking care of Brut, but I didn't realize how far behind I'd gotten in my plant duties until after he died in June.

And then that's when I saw it...a new growth on my biggest and most favorite plant, Dracena fragrans.  A new sprout coming right out of the top that was not part of the oringial growth.  See, my plants went through a bit of a drought and the top was dried out.  I was so afraid I was going to lose the plant, but a miracle happened, after my heart-and-soul dog died, a new sprout appeared and started to grow.

Grief is powerful.  It can break you down in ways you never thought possible because I'd done it again, neglecting my plants and the same thing happened.  It dried out and didn't have any new growth on it until last month when this new sprout began.  At the same time that I had this memory of Brut's death, when I felt like I cried forever.  Yet here in the quiet of God's spirit new life was beginning symbolizing my grief and spiritual growth.

This plant is so special to me I named it King (before I had Brut) and it is the only one of my houseplants that has a name.  'He' (yes, I call it a he) rules all the houseplants. And Brut my heart dog was also called the King and was ruler of the dogs and our hearts.  Amazing to me how the spiritual world works and the connections that are and can be made between love of two living beings. 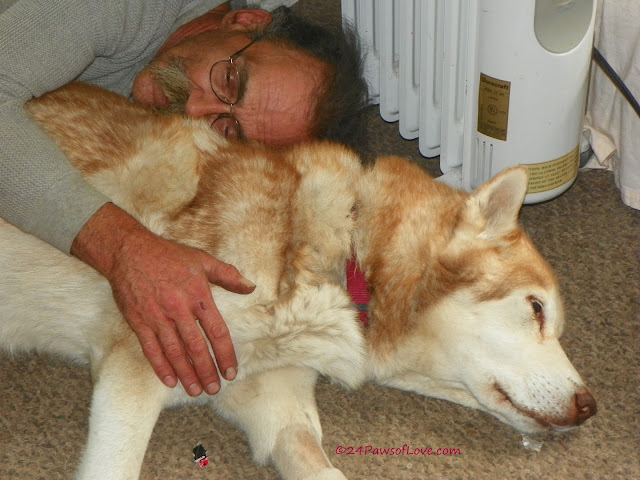 Posted by 24 Paws of Love at March 31, 2016
Email ThisBlogThis!Share to TwitterShare to FacebookShare to Pinterest
Labels: Daddy Dog Brut, death, death of a dog, spiritual connection

Nature is a powerful force. I love the way some plants thrive even with neglect. Life goes on, no matter what.
♥
Wyatt's Mom