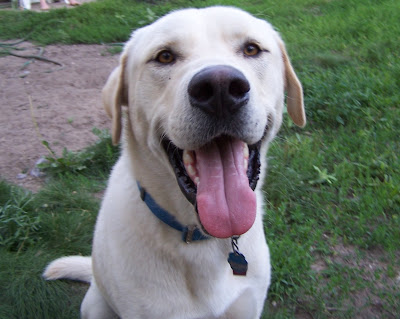 Can you beat that smile??

Chance amazed me again.  I took him for a ride with me while I ran some errands and en route I thought, I'll take him to the park for a reward for being such a good boy.  We haven't been to the park since I started leash training him and I wondered how contextual this experience would be for him.  I was simply WOWed!

When I gave him the OK to get out of the car, he about pulled my arm off while I tried to shut the door.  He was rather excited and it took me a couple of minutes getting him to sit/stay long enough so I could close and lock the doors.  I walked him around the drive first, for a little reminder of loose leash walking.  I decided to skip the trails as we walked around the baseball fields.  I was stunned.  He did fantastic!  Then when we came to the back entrance of trails, I let him lead the way and again I was blown over.  I decided to jog with him the rest of the way through the trails so he could pick up the pace as he was doing so well.  Even with all the new smells and the intensity of them, he only pulled a couple of times that we had to stop and regroup, it was simply amazing!

I had really expected this experience to throw him off guard.  I thought he would be overly excited and completely detached from me.  I was so overwhelmed when he listened to me and we took our practice walks up and down the park driveway.  I thought I would be lucky if I could get him to walk the park road without any problems.  I thought for sure he would lunge and drag me everywhere with all the woodland creature smells.  I thought there was no way possible to be in a completely different environment and have any good success.  He has such a history of being in new places and literally dragging me all over the place.   I had no doubt that he would give me a hard time about being trained at the park when there were more interesting things than me there. That's what I get for thinking!  I was dead wrong and that was so cool!  I love the lesson he taught me.  I was prepared for the worst and he gave me his best, can't ask for anything better than that!!
Posted by 24 Paws of Love at May 20, 2011
Email ThisBlogThis!Share to TwitterShare to FacebookShare to Pinterest
Labels: dogs, loose leash, potty training, walks

Good job Chance!!
Did you get any treats after all that great behavior?

That smile is catching! Now I am smiling.

Trust your boy! As long as you send him a message of confidence and calm, he will live up to your expectations...and then some! Good boy, Chance! Have a great weekend.

I love it when they surprise you in a good way!

Kudos to both Chance and you! It's just wonderful when training falls into place and they become one with us! Great job!

What a good, good boy Chance is! We love you Chance! We are so proud of you! We are sending you lots and lots of head and butt pats! lol!

That is the cutest, happiest smile ever!!!! :D

way to go, chance!! no wonder you've got that mega smiley on your face! :)