Predatory animals have attitude.  It is something that stands out among them and one of the reasons they are my favorite regardless of species.  I am particularly fond of the large wild cats as their power and grace is astounding and they are nothing short of attitude.

As I have observed my male dogs over the last few years, I find they have more of this cat-like intensity than that of a wolf.  They have a warrior-like attitude that holds true not only in their stance and exquisite energy, but with the fierceness of a quick thinking mind.  They are agile and fluid in both their movements and thinking.  There is a stealth in each of them that is lightning fast and powerful, yet tamed with discipline that magnifies their grace and beauty.  I have come to cherish this wildness as I experience this inter-species of behaviors and the freedom of this wild cat/dog attitude that draws me in even closer to them. 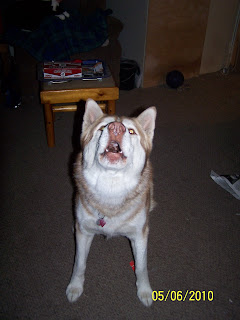 Brut I associate with a tiger.  I remember during those early days when I brought him home and the wild craze in his eyes and feeling like I was among a Bengal tiger.  His cut throat dominance and seemingly unpredictability with which he throws his power around brought me to this conclusion at a very early age.  And though it has tamed, the fire in his eyes still roars. 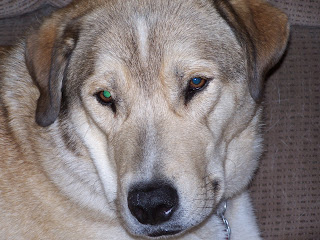 Zappa has been referred to as a lion by many because of his coat and short mane.  Zappa is king in is his castle.  While he knows he must wait under his father Brut to claim the throne, he roars in protest and challenge, not one to go quietly.  He does not back down easy and will stand his ground, but not without proclaiming what is his first. I can picture him lying in a grassy field, shaking his mane with a loud, grumbling roar warning all that come near, he is king. 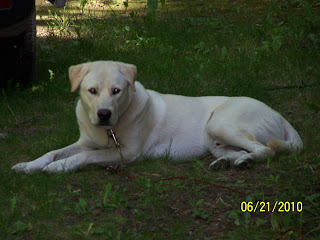 Chance's stealth is the quieter than the other two.  He is sleek and sly and calmer with his power.  Crouched in the grass this white panther is ready for the pounce.  Always on the look out, every muscle is taunt and ready to protect.  His low key posture keeps him alert and ready for his patrols, aware of every potential intruder that may cross his path, hiding like a thief in the night.

While they don't exhibit these wild cat attitudes all the time, there is a sense of covertness that I can not deny.  The roars that come forth have power and strength that is beyond that of what I know of dogs.  There is a grace and intensity that I attribute to this cat-like attitude that I don't find in the females.  Whatever it is, I have come to love and respect it.  For I have always wanted to live among the wild cats and crazy as it might sound, now I am.
Posted by 24 Paws of Love at June 22, 2011
Email ThisBlogThis!Share to TwitterShare to FacebookShare to Pinterest
Labels: attitude, cats, dogs, dominance

We notice this too. Of our 3, Tagar has the most big cat like tendencies, in the way she moves and stalks preys.

Fascinating comparison. Your descriptions had me seeing them as large prowling stealthy fabulous wild cats! Cool :)

I always say that Leroy was a cat in another life!
Love this post:)

How interesting. I never really thought of dogs as being "wild cat" like, but can certainly see it based on the way you've described it.

I hereby declare y'all to be honorary cats!

In our Army, it is the females that are most cat like, stealthy and fluid. Great descriptions and observations of your packs...we will watch and compare.

I don't attribute many (ok, any) of the qualities you mentioned to Grady, but I have had the same wild cat parallel in my mind with the Neapolitan for years. When they walk, it's the way a panther moves, slinky and slow. But when they're "turned on" they can flip in the blink of an eye, displaying agility you'd never dream they had. Pretty cool!