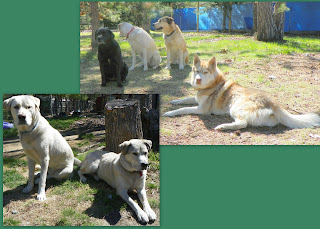 When we developed into two packs, I felt rushed to immediately integrate.  When I found that wasn't going to happen I struggled with many inner demons for all the things I had done wrong and the reasons why the dogs could not combine.  If I wasn't being judged by others, I was doing it to myself.  I took on the impression that not having the dogs living as one happy pack was just wrong.  I have hung my head in shame many a time when asked if the dogs were together yet and almost three years later they are not.  I was a failure to myself and my dogs and few understood.

Hire a trainer, fix the problem.  Seems easy enough.  Until you take in account our resources for help were very limited.  A bad experience with the only behaviorist for miles and a trainer on the phone who automatically claimed our situation hopeless and deemed getting rid of one or more dogs was our only solution.
These were our "options."

So we did the best we could, with what we knew, with the circumstances we were given.

Countless times I have beaten myself over because we had two packs of dogs and not being able to change the past.  For those first few years, I was in a panic about fixing what I thought was a problem and wanted to change everything that was wrong with it.  We "had" to.  As if it were part of some unbreakable law.  There was a must, an urgency that the dogs needed to come together, or else.  There was an internal pressure of  pushing an imaginary deadline over my head, as I tried to force things in my mind to come up with a solution that I could never find.  All the while managing the best I could while my husband worked to feed our two packs and so we could have a place to sleep.

About six months ago, I noticed a settling down of the dogs.  After all of the uproar of changes that occurred over such a short period of time, things had finally plateaued and begun to even out.  As this shift took place, I found myself breathing again.  We had made it through the worst of all the changes and problems and I suddenly found myself comfortable with our home and the living arrangements of the dogs.  I found for the first time, that I was OK with having two packs and felt secure in our reasons for it.  I was content with the progress that was happening within each of the packs and was enjoying it.  Most importantly, I found I was happy with our arrangement and that I loved the diversity and uniqueness of it. The dogs were really beginning to thrive and I realized that having two packs of dogs was a pretty cool set up. 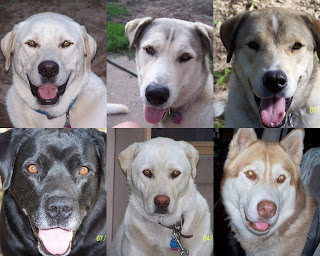 While I still find myself with twinges of jealousy at other homes that have multiple dogs that get along and have never had to consider or would consider separating as an option, when I come home and look in my dogs eyes, I know we made the right decision. I have no desire to make any drastic changes or moves in uniting them, another decision I am finding myself quite comfortable with.  It has brought a peace of mind and the ability to relax and quit forcing something to happen that isn't necessary for the well being of our dogs.  No one is hurting due to being separated, there is no suffering on anyone's part because they are not all together, and if anything there is less suffering because they are not together.  All of their needs are met.  And I can live with that.  It is more than OK because I would rather have our home be set up under these conditions than get rid of some or all of the dogs.  It is more important than the fact that our household doesn't fit what is considered to be standard and normal.  For so long I thought having two packs was a horrible, unjustifiable problem that needed to be rendered or our household would never survive and because of this I have suffered these years of guilt for feeling like less of a dog owner who should loose her dog owning privileges. If it wasn't for the dogs themselves, I would have never made it through in following our beliefs and what was best for them.  It has been a painful road, but a rewarding one as we had to break our own ground in order to follow our hearts and trust in the will of the dogs.

And if I had it all over to do again?  I would make the same choices but with a clear conscious.

So we may never fit in at the kennel club, we found our solution for our six dogs and have found a way to have a happy and healthy home.  Every choice we made has been based on their well being and out of love for them.  What I thought was so awful and shameful, has turned out to be a gift that I appreciate and enjoy.  By letting go of all of the things I thought "should" be, I have been given a chance to revel and marvel in the life of having two packs of dogs, guilt free, and that my friends is a wonderful blessing I treasure.

Excellent! I'm so glad to hear you're gaining some peace about your "nontraditional family arrangements."

Your responsibility is to give your dogs the best and least stressful home you can. And you and your husband are making lots of sacrifices to do that.

So stay strong. The dogs will tell you if and when they can be united.

Kudos to all you have done to find the best solution for your situation. And you never know one day the dynamics may change and you may yet have one big happy pack. For now, nothing wrong with having two happy packs:)

IMO you have done a wonderful job in a tough situation. You never gave up on your pack, which shows your true devotion to them!
Everything is not always as it seems on the outside, I had major problems with Sherman and Leroy a few years ago, problems that I really never saw coming. We worked through them for the most part, but the reality is still always there in my mind.

When I first read about why you have two packs I remember thinking that these are very devoted owners indeed. To take the action that is best for the dogs instead of best for the (average) owners shows an overwhelming love in the hearts of the both of you.

You're doing a great job.

Congrats to you for finally being able to relax and enjoy your unique and wonderful family! There is really no standard or normal - just what is best for each person or family and you have found the best for your family!

As long as it's working for you and all the dogs, I don't see a problem with it. I think most of us put more pressure on ourselves than anybody outside our situation does!

You shouldn't be hard on yourself for doing what works for your family, even if it's not traditional or the norm. If it works for you and the 24 Paws, then it's the right solution.

I'm so pleased you've managed to accept a situation that you're making the best/most of, rather than taking the easy option of reducing your pack. It's always wonderful to read your posts as often you express what I feel but don't know how to write. Thank you.

I'm glad you stood up and did what was right for your family. So many people would have gotten rid of some of the dogs just to have a "happy" family. You however have realized that a "happy" family is also one that is filled with challenges and decided to deal with it. In turn your dogs have experienced the love of a family. Even people in families are different, I mean are there any family events that you go too that there are some people you see that you just don't want to spend time with?? You kind of acknowledge their presence and that's enough. A trainer once told me, "their is nothing wrong with a dog that doesn't love every person or dog that comes their way...do you" Makes sense to me and helped me to see Kirby very differently.

How you feel about your non-traditional packs is exactly how I felt about putting my dog in a crate when I leave the house. They are two different situations but I think the type of flak we receive from the dog owning public is very similar. Some people refuse to see something from another point of you.

I've always believed that dog training should relfect the dog owner's lifestyle. Having two packs works for you and your family. Everyone is happy and things flow as you want them to. What's wrong with that? Just because others don't want to live that way doesn't mean there is something bad about it. It's just different.

Congratulations on easing your mind and accepting your dogs for who they are, being creative enough to find a solution that helps everybody win.

I applaud your ability to find a way that works out with the dogs. There is nothing wrong with having two packs and you now have peace of mind in knowing that!

As we are learning, forming a family is a process that takes time and understanding. It is important that every member feel safe and loved...the structure changes and shifts with time and circumstance. Your instincts are sound, your love is true, your commitment sincere...the rest will flow and amaze and in the end be as it is meant to be.