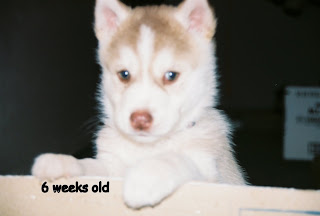 If you've ever owned a Husky puppy, you know the sounds they can make can scare the bejeezes out of you.  They sound like they are being strangled.  Well, every night I put Brut in his child's playpen (my husband's idea, don't ask) and then he would carry on with these gut wrenching screams and screeches that I would swear to the heavens he was hurt.  I knew he was trying to get my attention but his voice was so wrangle that I would end up getting up and checking on him, which of course only lead me to a wagging tail and a smiling face.

It became so intense that I was stayed up all night growling at him every time he started to make a sound.  A book I'd read that insisted that acting like a mother dog who was disciplining her kids was the trick to correcting your dog on their bad behaviors.  Yeah, right.  Not this pup!  What I didn't know through this whole mothering process, was that Brut was taken from his mother before she would have begun to discipline him.  So not only was it not working, my throat was wearing out from growling all night, I was getting delirious from lack of sleep, and highly frustrated with no progress.

So after being up half of the night growling, I finally gave up and went to bed.  Brut shrieked and screamed as I tried to ignore the horror that sounded like he was dying.  Then suddenly, dead silence.  QUIET!  I was so exhausted, I passed out in seconds flat.  When I awoke, I heart melted, there was Brut, laying next to my side of the bed, curled up on a pile of my clothes.  I just laid there in amazement at this little puffball sleeping so peacefully next to me.  I never heard Brut get out of the play pen, I thought he had finally given up and fallen asleep in it.  There was something so precious about the way this little puppy sought me out and wanting to be so close.  He never tried to wake me and make any fuss, he just needed to be nearby.

After that night he would wait for me to lay down and then he would crawl out and cuddle in my clothes and fall asleep.  Why I kept putting him in that playpen was beyond me, but it was like a game to see how long it would take him to get out of it before we would both be snoozing into a quiet slumber. 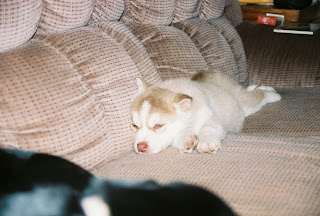 I can never really describe that morning when I awoke to find him next to me, just that it touched me deep down in my soul.   Brut was such a difficult puppy and there were so many things I didn't know about him yet that would determine so much of his behavior, but this one little step held many keys to the bond we have and has helped him to become the dog he is today.  It is more than a memory, it is the foundation for our relationship that I hold so dear to my heart. Brut made the first move to bond.  A bond that will last forever and stand the test of time.  Who says a dog is just a dog?

Husky pups must be about the cutest there are. That's a wonderful memory and bond for both of you. You express so well what your family of dogs mean to you and why, thank you:)

We've always put the pups next to the bed in a laundry basket. It wasn't so high that they felt trapped, but I could still reach down and pet them when they were quiet. He has a cute pup!

What a great post! To see Brut sleeping next to me would have had me in tears and I would have scooped him up and put him in bed with us, which would have been the wrong thing to do, but I wouldn't have been able to resist. What a touching story. Loved it.
Have a wonderful day!

Now this is a tearjerker of a post - how sweet and special that moment must have been! We all had to stay in crates when we were little and we cried and cried too. And we STILL don't get to spend the night in the humans' bedroom. Got any extra space there for us to sleep:)

This is a wonderful post! It really shows the strong bond that you feel with with your pups! Brut is one special boy!

Thank you for your warm and sweet comments in my blog ♥
I admire you for taking care of all these dogs.

We've always had the best luck by having our dogs sleep in the bedroom with us, too. Even when we fostered, we set the crate up or brought a baby gate in so they could only be in one small area beside the bed and we never had any fuss! I think a lot of that is that pack mentality that gives them that drive to be all together.

It's good that you were such a fast learner. I've never been able to keep puppies out of my bedroom either. They just need human contact.

What a special bond you two have...and what a beautiful memory! All of our furkids, except for Quinn sleep some or all of the night in our bedroom. Quinn prefers the safety of the room where he first sought security when he moved here...the office. Thanks for the calming encouragement...and our boys, also tend to get more possessive when Steve is home. If fact the entire WDA jostles for position around him.