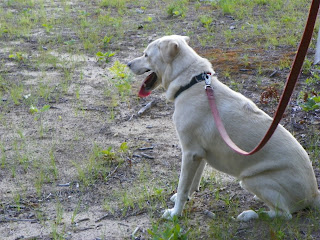 Have you ever let your dog take the reins and let him guide you?
I had a  unique experience with Chance and an anxiety attack that had occurred just before I was ready to take him for a walk.  I had almost talked myself out of it because a walk meant facing a few extra fears and I hadn't begun to calm down from my previous one.  A post written by the House of Carnivores has been ringing through my head ever since I read it about her experience with horses and that no matter how weak or scared you feel when thrown, you get back on that horse.  So I bit the bullet and took Chance. 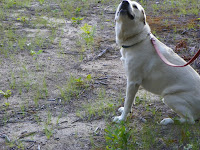 So as Chance and I headed through the wooded trail, my anxiety was growing more with every fast pace step we took.  When we reached the end of the trail at the opening of the field, Chance pulled and I stopped.  He sat quietly while I held my fluttering stomach and tried to concentrate on my breathing, the wind and sky.  Chance looked at me every so often and then would turn his head.  The roles had suddenly reversed.  He was patiently waiting for me to calm down and was helping me to do it before moving on.  As I gained some composure our gaze met and held and with my own words Chance asked, "Are you ready?" 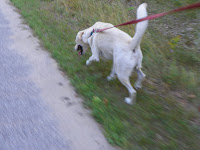 I was OK, but still shaky as we headed out onto the field.  Chance was pulling in every crazy direction possible and that's when I realized this wasn't my show anymore and I surrendered to him.  We started jogging around the outside of the track, then the pace picked up until we were both running.  I mean RUNNING!  Ya know so fast your feet feel like they are going to fly out from under you.  After the first stretch I had to slow him down, I was laughing so hard and his game had worked. Speed burnt off that extra anxiety!  It was great!

We did a couple more short burst, then cruised up the hill and back down all at top speed and all the while laughing so hard I could barely catch my breath.  This was the Chance I had started running with before we started leash training and he was in his glory, but it was more than that, he knew what we needed and he flourished in the trust I gave him.

When the scent of a rabbit was more than he could handle it was time to take the reins back and at that point he was willing to give up the control.  What an awesome experience to be able to share!  My anxiety was long gone and I had let go to experience the trust in this relationship that had been built.  I couldn't believe when that little stinker was waiting for ME to calm down, something  I have done for him many times before.  How do you even begin to explain the depths of a relationship like that?  Talk about being touched.  Tears and a smile come to my face when I think of that moment.  And when we ran...he lead, I followed.  It was that simple and miraculous at the same time. 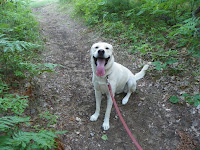 And the only way to sum it up...that's my boy, Chance.  :)
Posted by 24 Paws of Love at August 02, 2011
Email ThisBlogThis!Share to TwitterShare to FacebookShare to Pinterest
Labels: anxiety, trust, walks

What a great experience and thanks for sharing it with us. Maxx has trouble walking alongside camps or tents when we are walking at the beach. He's terrified of the canvas that flutter in the wind..He'll go berzerk and start pulling and jerking..wonder if he sensed that i anticipated he would be nervous or something..
I'll try again, till he and me calm down and will be able to walk pass without any fear. :))

I came over to see Chance and Blaze (who would ever think they are obsessed like Jasper?) and ended up falling in love with your beautiful post.

I love how you described Chance waiting for you. How intuitive of him. Blows me away. I also love that he made you forget your anxiety and how to just have fun.
I gotta say it brought tears to my eyes. What an amazing dog. What an amazing writer his owner is too. :)

I'm glad to hear that the post about my horses inspired you! And it sounds like everything turned out great. It's fantastic that Chance knew exactly what you needed to do to lose the anxiety; I think it was a truly awesome moment between the two of you.

How many people would have thought to let their dogs take the reins like that? I love that you are so open to letting your dogs be themselves and sometimes give them the opportunities to make the decisions. I am not nearly so free with Shiva. But there is a time and a place. Perhaps every once in a while, I need to let go a little and see what happens.

I am so glad he was able to help you deal with your fears!

That is totally AWESOME, what a GOOD boy! I think that laughter releases some type of endorphins? that are good for the body and mind, along with the exercise, let Chance take the lead !!

Isn't it funny how sometimes those little moments come to us just when we need them? I love how happy and proud of himself he looks in those photos!

Chance's smile in that last photo says it all!!

What an amazingly awesome experience of your relationship with Chance in action. Momma and I cry in joy for you both!

What a great story! Thanks for sharing. :-)