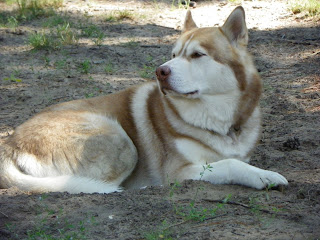 Don't let the name or the persona fool you,
inside I'm all mush!
A behaviorist that we took Brut to once claimed that by naming our dog with such a macho, dominant name we had embarked him on a self-fulfilled prophecy and hence the reason we were sitting in her office.

While there is a part of me that can see her point, (don't we all act a little different around a dog named "Killer?"),  my husband named our little puppy, Brut after his favorite aftershave, having no idea about Brut's dominant and aggressive temperament. 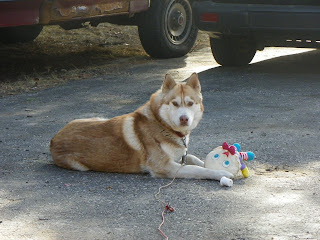 Don't I look real tough playing with this stuffie doll??
While Brut has fully lived up to his name and then some, is it because we gave Brut the "rights" to his name that set the course of his destiny?  Or did we find a name that by chance happen to fit the dog he already was?

Personally, I think it is the second one.   I don't think that Brut's name made him the dog he is, but his name encompasses all that Brut is.

(Sorry, US Residents only)

Posted by 24 Paws of Love at October 08, 2011
Email ThisBlogThis!Share to TwitterShare to FacebookShare to Pinterest
Labels: dogs, name

Interesting concept. I've always tended to give my dogs 'people' names, might have something to do with not having any children? Personally I think people who call their Chihuahuas Killer or similar are kind of poking a bit of fun at themselves and life in general:)

when I was a kid, we got a Border Collie X and my mother named her 'Rags' - turned out she was a high energy dog who was easily bored being stuck in the backyard at home (hm, who knew that was going to happen?) and she ripped all the washing off the line on numerous occasions - so she did live up to her name..... in a way, but of course she was always going to destroy washing, even if she was called Lucy or Bonnie!

I have just found you and am now following you on google :)

I think the name doesn't affect the personality...I have seen some Killers that are pussy cats and some Whimpies that are terrors.

Maybe Brut named himself. I waited for Ki-Anne to tell me her name and boy, does it fit!

While Brut's name might have been a bit of foreshadowing, I don't think it has any impact. All of my dogs have people names and they all have distinct personalities. Our interactions with our dogs do have some affect on how they turn out - nature vs nurture. But I don't buy into the name having that much of an impact. And it sounds like Brut's got such a big personality that he was born that way :)

I think we get lucky naming pets sometimes. I have a cat I named Jabbers when he was a kitten because he talked to me all the time. He still does. I would agree some people shy away from a big dog, like Brut, with a name that sounds intimidating.

I found with my two Huskies that people were afraid of them just because of their breed. I was always having someone say they looked mean. I never saw it.

I don't think the name itself has a darn thing to do with a dog's temperament. After all, dogs don't understand our language. What they DO understand is how we react to them, so if WE react to the name, that WILL have an impact on the dog. My name is Rumpy because Jen said I was a pain in the butt. She has realized her naming me thus was based on how SHE saw me and not how I was.

What an interesting premise. I just happened to read this same topic over at Dog Behavior Blog and wondered this same thing myself. http://bit.ly/nLOIdk

I also knew a dog names Brut. He was a Rottweiler. The biggest Rottweiler I have ever met and I have met a lot of them. He turned aggressive over time, but I suspect the doggie daycare he went to had something to do with it. He was a wonderful dog before then and was one of Daisy's best friends at the dog park. We never see him anymore. :(

Maybe there is something to a dog's name.

Sorry I've taken so long to get back here. Been a crazy couple of weeks. I love your discussions.

We like Brut's name too! One would think that the dog might grow in to the name...but that didn't happen with LadyBug....she loves to roll in anything that smells....we think she is quite the tomboy!!!
xoxo Chloe and LadyBug

Never thought about a dog growing into a name.

Unless a name was picked out prior to birth and then the pup fulfilled its name, I'd think it more likely that the name was picked because it fit the pup's personality. As humans we react more to another's (man or beast) personality than to the name.

Interesting thought. I sometimes wonder if Agatha was a fussy old girl because I gave her that name. The only way it would work is if we treated a dog differently because of his name. Do you think you treat Brut in a way that reflects his name?

BTW, Brut is also French for dry. I always assumed his name referred to his dry wit. :)

Interesting question. The dog down the street is a beautiful, sweet, gentle, obedient golden retriever girl....named Beast. She's one of the few dogs Kelly isn't afraid of!