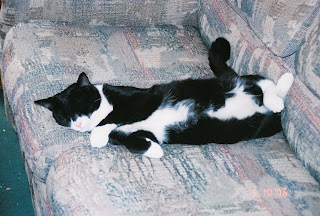 Three weeks after burying Sparky, I did my habitual check of the pet section of the classifieds.  Free kittens.  My heart was pounding and I began to shake a little. The house seemed so empty without my favorite cat and it couldn't hurt just to call...he had two kittens, one of them was a black and white male.  Just what I had always wanted.  The guy tried to give a further description but I was shaking so bad, I didn't a word of what he said, except to get directions.  After I hung up, I remember feeling the guilt of betrayal.  What the heck was I doing?  How could I even think of another cat when Sparky was still so fresh on my mind? 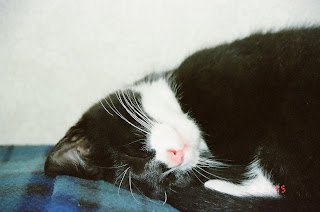 Something kept pressing me forward.  When I saw the little kitten, I was memorized.  I was in a total state of shock.  This little wild guy was the cat I'd always dreamed of having.  Solid black, with white paws, belly and face.  He was so precious.  He looked like Sparky, but he was all his own.  I couldn't believe any of this was happening.  He was like a dream come true.

We headed into town to pick up some extra's for this little bundle of joy, when while I was holding him, he pooped in my lap.  While a natural reaction, I began sobbing, as my husband pulled over.  Maybe this isn't such a good idea. I said through my tears.  I took his accident as a sign that this was all wrong.   The enormity of taking this little guy home became suddenly overwhelming.  I didn't know if I was ready for caring for this kitten, when I was still so heavily grieving my heart cat.  How could this feel so right and so wrong all at the same time?  But a little voice inside of me kept saying, he was the one for me. 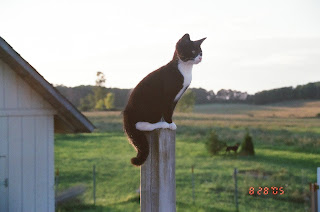 We called him Boxer for his white paws and his boxing action.  Boxer was born outside, wasn't litter trained or weaned and was like a wild tom cat.  He was one of those crazy kittens that climbed up the screens, curtains and anything else he could reach.  He was the first cat I didn't have de-clawed and he was just plain wild.  He didn't like to held, never sat on my lap and seem to never tire of tearing all around the house or playing with toys for hours upon end.  He had no problem livening our household right up.

An amazing thing happened as I watched this little bundle of wild abandon, little pieces of my heart began to heal.  Since Sparky was over year old when I got him, watching Boxer was like watching Sparky as a kitten.  Sometimes I would be laughing out loud and other times I was in tears as I grieved and rejoiced in Boxer's spunk and personality.  Nothing like the mellow mood of Sparky, yet so many times, I saw that Sparky look in Boxer's eyes.

Did Boxer replace Sparky?  Never.  But he gave me something to hold on to so I didn't fall through that gaping hole in my heart and gave me just what I needed to heal and love again. 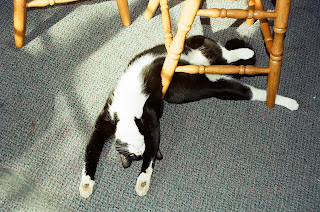 And now I can't sit down without Boxer plopping on my lap.
Posted by 24 Paws of Love at October 03, 2011
Email ThisBlogThis!Share to TwitterShare to FacebookShare to Pinterest
Labels: cat, death, kitten, love

What a beautiful kitty! He looks so stately on the post! You know...like "Senator Boxer" will you please give me an opinion on this matter...LOL! Great story of healing and memories...thanks!
(BTW - ALL your dogs in the header look like they are smiling!)

You are right...it was meant to be.

Boxer is so cute! I always like to think of it as not replacing the one that you have lost but keeping your heart full.

We think Boxer knew he was going to the right home.

He's adorable! My sister had a cat who looked just like Boxer, and we called him Whiskers. He lived to be an old cat, and passed away on the back deck in his favorite patch of sunlight one day.

Your experience with adopting Boxer reminds me a lot of my experience adopting Bunny! Except she didn't poop on my lap on the way home. ;)

Love the picture of Boxer sitting on the post. He looks so dignified and such a handsome fella. Once a pet is in your heart; they will stay there forever and there's always room for another one that comes along. To me, all pets are special and unique.

Mostly, life doesn't go according to the way we plan things but we always instinctively know when it is "right." Momma and dad were not even going to consider a new pup for at least 6 months after their Sheltie Sheena died and I came along just 2 months later. And we were going to be a "one dog only" family (and were for a LONG time) until momma say Quinn's picture on deathrow which a FB friend posted. Each of the others were not planned but were just "meant to be." Boxer is where he is supposed to be in your loving family and part of your special world...and that is perfectly wonderful.

Boxer is too freaking cute... I think it was meant to be.

Love these pictures! Things have a funny way of working out ...sometimes in unexpected and lovely ways.

Lovely cat! You two will have much joy together.