Brut actually goes into a panic when food falls on the floor or under the furniture.  Like he has found the last morsel and he's been starving for days.  If you try to help him get the food, he almost screams like he's in physical pain and makes attempts for your hand.  I do my best not to spill kibble or treats, and pick up every morsel I can find before Brut is in the room. 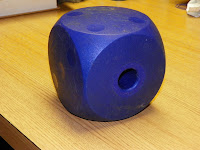 Brut and I were playing with what I call the puzzle cube today, just him and I, and while he pawed and rolled this little cube spilling treats all over the floor, I was following behind him making sure none were missed.  A light bulb went off, why not work on his food issues with this game?  So I got on the ground, close to him and began picking up the remnants of chewed plastic while keeping a lookout for any wayward treats while still playing with him.  I began inching closer to him on all fours, until I was eventually in his space.  I'd even brushed up against him to get the cube when it was stuck against the wall.  He was doing great and having fun.

Then I began playing with the cube, by crawling back and forth after it and hitting it around.  As the tempo increased, so did Brut's excitement.  His eyes, widened, his heart was pacing and all his fur began stand.  There was no doubt his adrenaline was rising.  As we took turns with the food toy, I was conscious of his body language, he was excited, but he also had a look that said, he didn't know what to think.  This was fun, but these were his treats and he didn't know what to make of me messing with them.  He was caught between wanting to play and wanting to guard.  I began to slow my actions, while I wasn't scared, in his semi-heightened state any quick movements would be interrupted as hostile.  My goal was not to aggravate him, but to keep this level of play safe for both of us.   I let him guide me.

When the cube rolled just out of easy reach, he came up to me and nibbled on one side of my lips, licked my face like crazy and then repeated this several times.  I couldn't have been more thrilled!!  I have seen Fiona do this very same action with Silver, a boundary line that says, "Stop.  I don't want to hurt you.  Please don't go any further."  I stayed in this same position, I didn't move forward or backwards and I didn't freeze.  He continued to circle and walk back and forth in front me, every so often licking my face, while I sat in place.  Eventually he laid down next to me, I touched his paw with my finger, and he gave me the signal again, only this time the nibble on the lips was even lighter than the first time.  I continued to let him calm, until he was certain that I wasn't making a move after the cube and continued to acknowledge his boundary line.  After a few minutes I got up and he got up with me.  I thanked him profusely, while having him sit and gave him a treat.  The game was over, I picked up the cube to put in it's safe place and then he went outside because that was his safe place.

As I sat down to absorb what had just happened, I was overwhelmed by what Brut had shown me:  Himself.  Not just "dog behaviors," but his actual true being.  There is no way to explain the amount of trust he had given me and I was humbled beyond words.  The mysteries of this dog went far beyond labels or insights into them.  It was Brut sharing with me how and why he is Brut.  There are no words that will ever justify the moments of being that passed between us, only to know they are forever imprinted on my heart.  A being who took a chance to open to me.  Our communication was beautiful.  It was like walking through Brut's world and experiencing it first hand. 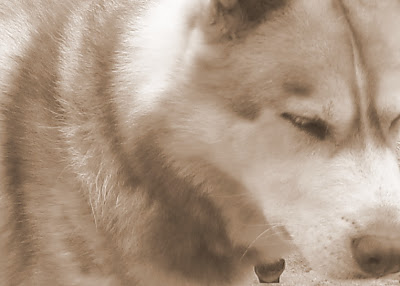 We are so very glad for you and for Brut! You have a special gift!!
xoxo Chloe, LadyBug and the mama

What a beautiful moment for you and Brut to share together!
The bond that you have created with your pack seems to grow stronger every day! It is so wonderful that you are able to learn so much from them. I think you have a special gift:)

Isn't it great when you have those moments where you totally get doggie communication and are able to bond & communicate on a much deeper level?? Brut is lucky to have such a perceptive momma!

What a wonderful thing! You shared a bonding moment!

That's a lovely story! We are happy for both you and Brut.

What a magical, blessed moment you shared...and REALLY shared, from the soul! True communication just makes the heart sing, doesn't it?

I'm sure Brut appreciates how carefully you've been listening to him.

Your story shows that truly listening to your dog and accepting for who he is will lead you to where you want to go!