What the Front Dogs did on their Summer Vacation 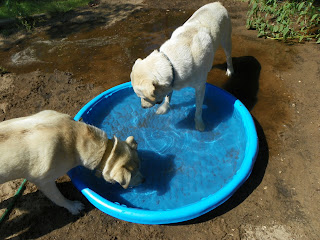 Bobbing for treats
As the Dog Days of Summer wind down and the unofficial end draws near, one of the highlights for the Front Dogs was their first pool, something we have always wanted to get them. Chance has always had a thing for water, but Blaze has that Husky respect for it and won't even go in a lake.  So I was rather surprised when Blaze got in with all four paws. 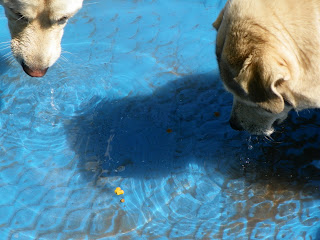 On your mark... get set...
For the most part the pool was a gigantic water bowl, but after a hot walk, they surprised me by getting their paws in the water for a cool drink. I helped things along with playing "bob for treats," a game they both loved.  When some of the treats sunk, Chance tried his best to paw the treat out.  He decided early on, he wasn't going to get his pretty little nose wet.  That's when Blaze surprised me even more by sticking her whole face in the pool to get that goodie. 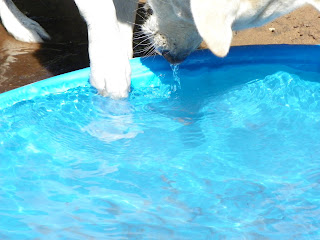 Now she expects me to go scuba diving for the darn thing!  That woman is crazy!! 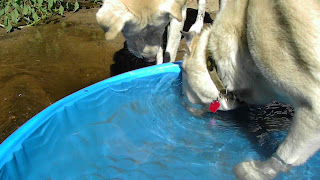 Show off!!
Wimp Dog!!
So what did you do that was fun, new and exciting this summer??

What fun! Our Five will be right over to join the Front Dogs!

Those pools are awesome. Our greyhounds love them and we have even had a few that laid down in them.

What a fabulous pool!!! Our big brother used to have one like that!!! WHY didn't we think of asking mama to take it out this year???? Well..maybe it will be warm next week and we can give it a try! You all look like you had so much fun!!
xoxo Chloe and LadyBug

Don't give my mom any ideas...now she will have me out in my pool bobbing for treats....

Excellent summer activity! Such great photos of them too! :D

I should have thought of bobbing for treats in our pool! My three greyhounds only used it as a water bowl and would only step foot in it when it was empty.

Woof! Woof! Yes, Summer is over ... but what a FUN FUN summer you guys had. Lots of Golden Woofs, Sugar

Mom says we had a pool a few years ago and all we did was drink the water and put the two front paws in. Maybe if she would put some treats in there, we would think about getting in. Looks like a lot of fun was had by the Front Dogs.

I think all dogs should have their own personal pool, so go for it guys! But I have to tell you--that water is WAY too clean! I could fix that for you.......

What great photos! I've just discovered your blog through the Saturday Hop, and loved learning about your packs. So glad to have found your blog, great to meet you all!

The photos make me wish I could jump in that pool too, it's so hot today! Have a great weekend! :)

Bunny and Morgan will both stick their heads in and blow bubbles when they bob for treats! It was too darned hot for us to get out and do much of anything, but going on the boat tour in Chicago this summer was new for us!

Cute photos with the pool!

We got a pool too! Argos loves it and will lie down in the water and partially submerge himself. Maera doesn't have much to do with it beyond drinking out of it.

Otherwise, our summer fun will be next weekend, at the annual greyhound birthday party. It will be at a pet resort, with lots of fenced running room and a gigantic dogs-only pool.

Feeling a bit of the summer wind down as well. It was hot and humid earlier, but dropped down to the 60's around 5 PM. Kind of sad. Will have to put the pool away.
So funny about Blaze. Sometimes dogs like to surprise us. I know Daisy always viewed the pool as a watering hole, but now she loved to dip her whole fave into the water to get a treat.
Obviously, great minds think alike! I laughed when you said you do bobbing for treats. So do I!

My kids have got a pool too, which they use to drink from:( I'm glad Chance and Blaze put their pool to better use!

It looks like fun and a nice way to cool off on a hot day! Hope the treats didn't get too soggy!

Sounds like Blaze is "too good" for the smelly old lake or creek. She wants chlorinated water in her own special pool. What a discriminating pup.

what a cool way to cool off!!