A Quiet Father and Son Moment 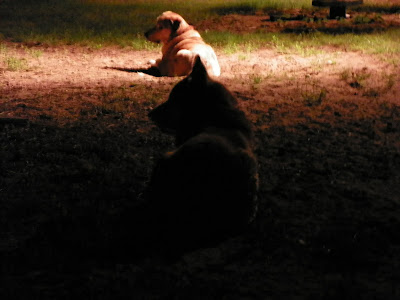 Posted by 24 Paws of Love at September 02, 2011
Email ThisBlogThis!Share to TwitterShare to FacebookShare to Pinterest

Lighting is hard, and I'm just a beginner myself!

I rather like the red tone, actually. It's atmospheric, and gives the picture a serene feel to it. Sometimes (most of the time?) it's best to forget the image your eyes saw once you press the shutter, and instead focus on making the most of what the camera captured. If you hadn't mentioned red, it wouldn't have registered with me as something “bad”. Still doesn’t. ☺

However, there are certainly things you can try, depending on what sort of camera/computer you have. Most cameras allow you to fiddling with the White Balance as one of the settings, so if you happen to know you are shooting inside under incandescent lighting, you can pick the “light bulb” to try to nullify the yellow cast. If you have a higher end camera, then there are probably several ways to dink with it, and you should check the manual.

I’m not sure what of lighting makes things red, but perhaps fiddling with White Balance will turn up the right setting for the sort of light you have.

Honestly, I rarely bother setting White Balance on the camera unless the lighting is extreme and of a single kind, instead opting to fix it on the computer. I have a Mac and I use Aperture for photo fiddling, but you can fix simple color cast, especially from a single kind of light, in Previewer (the default image viewer) and I'm guessing whatever computer you have has something similar.

A far bigger "problem", for which I have no answer, is that one dog is in a spotlight while the other is in deep shadow. Whether your eyes saw it that way or not, that is what the camera saw, and that (for me at least) in nearly impossible to overcome.

Without changing the lighting at all, you could have tried crouching down and shifting your position to the left. That might have made the near dog more visible as a silhouette against the brighter background, but it would have made for a “harsher” look, and it’s hard to say if you would have ended up with anything prettier.

Hmm… I’m not sure I really was much help there.

Did I mention that lighting is hard? ☺

Love the shadows and you can feel the contentment.

Lovely. I can appreciate the stillness of this moment and I love the combination of light and deep shadow. Does this reflect their personalities, do you think?

What a beautiful moment to capture!

You captured a great moment! It looks like Zappa is illuminated and Brut is cast to shadow. Something that you could try if the moment presented itself again would be to shine a second light, but lighting is really, really hard! Sometimes the happy accidents just happen.

I think the photos tells a story as it is. With dogs you often have to capture the moment rather than hope you can improve it as you might miss it altogether!